Okay, that sounds kinda creepy, but it's also kinda true. Show up to the annual meeting, find out what they're up to and how to get involved. With CB9 in shambles, groups like the Prosepct Lefferts Garden Neighborhood Association could use your support. 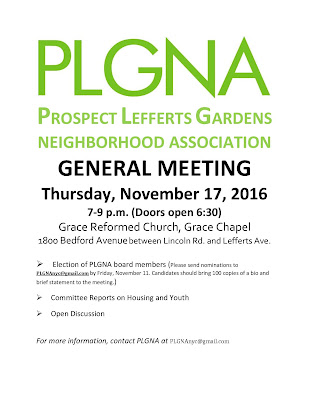 In the effed up files, you can insert the absurdist and cruel mischief of Alicia Boyd as it relates to PLGNA. She's sued them, mostly because she hates them, but ostensibly because they illegally accepted money from elected officials to do a community planning study of their own. Which, of course, they're entitled to do, and it wasn't much money anyway.

Why was AB so pissed? She wanted the money herself, of course. Now, if PLGNA were a big ol' organization it would probably just hire counsel and beat back the dragon. But they have, like, almost no money, and you're required to hire a lawyer to defend a non-profit. Apparently the court date has been postponed, but in December we need to show up in court and show that we won't be bullied by MTOPP or anyone else. Her mission, clearly, is to destroy PLGNA by making the claim that it is corrupt. It's so maddening. So, so, so maddening.
Posted by Clarkson FlatBed at 9:44 AM