So...what's up with that Armory, anyway? 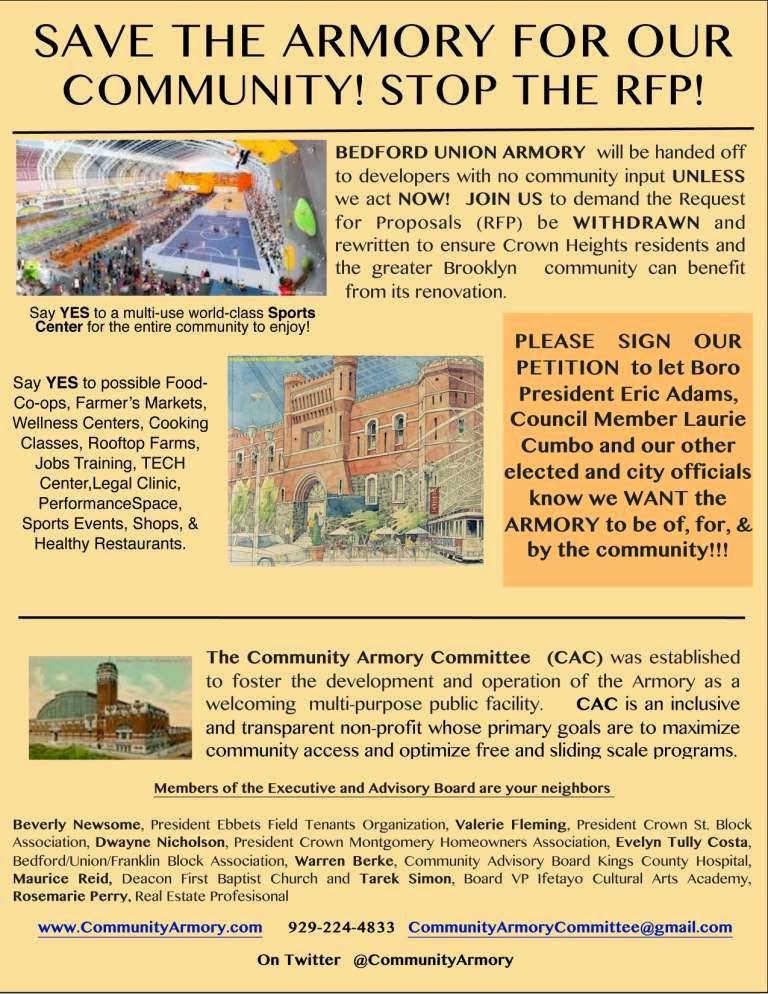 Last night before the Community Board meeting, a group called the Community Armory Committee (CAC) was at the door collecting petitions calling for the withdrawal of an RFP to develop the beautiful Armory just north of us at Bedford and Union (not to be confused with the one up the road near Atlantic). The RFP was created in response to community input given to a group from NYU that distilled that info (mostly from a forum at Medgar Evers awhile back) and gave it to the NYC Economic Development Corporation. Sounds good, right? Well, CAC thinks the RFP was premature, and they're worried that the development will cost the community in ways yet unforeseen. Since the goals "on paper" seem to be pretty good sounding, I'm wondering if CAC has a sense of history on these sort of things, and is concerned that private developers might talk out of both sides of their mouths. Usually in these things some sort of public/private partnership is preached, which means some aspect of the project make money and others don't (the stuff for the community) and you hope it's a wash.

To be honest, I don't know how I feel yet. I'd like to see the proposals that have been received, since the RFP is closed now, so they're all in. Personally, I don't know how a community group or small non-profit could run that thing effectively, but maybe the right partner is out there. Any ideas?

Below is the text of the NYCEDC offering. It's definitely worth giving an eyeball to, since it lays out a lot of the issues:


New York City Economic Development Corporation (NYCEDC) today announced a request for proposals (RFP) to transform the vacant Bedford Union Armory in the Crown Heights section of Brooklyn into a facility that will anchor the neighborhood and become a valuable amenity for local residents, while also preserving the historical character of the Armory.  The easily accessible site, located in one of the most diverse neighborhoods of New York City, was built in 1903 and contains 138,000 square feet.  The building was in continuous use from its opening until 2011, and in August 2013, the State relinquished use of the Armory to the City.  The RFP seeks respondents whose proposals will meet community needs and ensure the future success of the Armory within the Crown Heights neighborhood.

“We are looking forward to helping the Bedford Union Armory, a cornerstone of the Crown Heights community for more than a century, fulfill its potential as an engine of economic growth,” said NYCEDC President Kyle Kimball.  “Reactivating this historic property will generate jobs, spur economic activity, and revive a vibrant facility that will once again serve the neighborhood for years to come.” “I am ecstatic to see that, after more than two years of community engagement by my office, we are seeing significant movement toward the repurposing and redevelopment of the Bedford Union Armory,” said Brooklyn Borough President Marty Markowitz. “This amazing facility will become the 'crown jewel' of Crown Heights – a fantastic community space in a neighborhood underserved in recreational and community facilities. I want to thank my fellow elected officials for their support of this project, namely Congressman Hakeem Jeffries, Brooklyn Borough President-elect Eric Adams, Assembly Member Walter Mosley and Public Advocate-elect Letitia James, as well as Deputy Mayor Robert Steel, NYCEDC President Kyle Kimball, their respective staffs, and of course NYU Wagner’s School of Public Policy for administering the capstone project that catalyzed this progress.”

“I am proud to join the New York City Economic Development Corporation in announcing the RFP to develop the Bedford Union Armory in the Crown Heights,” said Council Member Letitia James. “It has long been my interest in seeing the Armory converted into a mixed-use space that includes an open, accessible recreational facility that serves the needs of the local community. I look forward to assisting in the transformation of this beautiful space.”

"The development of the Bedford Union Armory is a vital centerpiece of the economic rejuvenation of the Crown Heights neighborhood," said Assemblyman Walter T. Mosley, who represents New York's 57th Assembly District. "By providing new valuable community space and resources, the Bedford Union Armory will help define the character and principles of central Brooklyn for the next generation. I look forward to working with the New York City Economic Development Corporation and my partners in government to ensure the smooth and fair development of this important site."

Respondents will be selected based on their ability to meet the following goals:

One or multiple developers may be selected to develop the site, and it is anticipated that a designation will be made by spring 2014.  Proposals must be submitted by Thursday, January 23, 2014.

In 2012, Brooklyn Borough President Marty Markowitz initiated the Bedford Union Armory redevelopment process, a community engagement and visioning process that brought together local elected officials, residents and other community stakeholders to help determine appropriate future uses for the Armory.  The community recommendations included public uses such as public recreation space or a sports-specific complex.  The recommendations also acknowledged that the feasibility of these types of spaces would require developing a portion of the site for private uses.  For their capstone project in 2012, graduate students at New York University’s Robert F. Wagner Graduate School of Public Service authored a report suggesting funds for operating the Armory could come from constructing apartments on the site of its one-story parking facility.

In recent years, the National Guard has opened the Armory for a variety of civic functions, including events for the local Caribbean and Jewish communities. In 2010, the Armory served as a collection point for canned goods and other emergency supplies in the wake of the earthquake in Haiti. In addition, the Armory has been leased to movie production companies for set building and filming.  Built by architects Pilcher and Tachau, the Armory was acclaimed as the first structure of the “L’Art Nouveau” style in Brooklyn.
Posted by Clarkson FlatBed at 8:00 PM