Karim Camara Out As Assemblyman

Hey, we're on a roll with mayo! After getting a new State Senator in Jessie Hamilton, when longtimer Eric Adams became Borough President, now we're saying sayonara to the Reverend Karim Camara, our NY State Assembly dude. He's moving on to lead something you've never heard of and probably don't care about so I'll spare you the details. Let's just say it sounds like a lot less of a headache and he won't have to take any more heat for the State's notoriously inept governance. 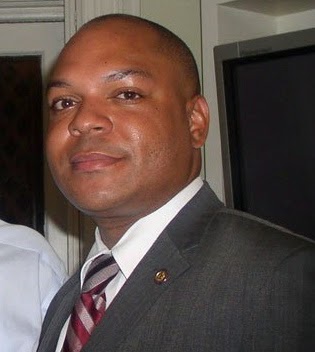 Granted parts of the Q's readership are NOT in his district - the 43rd. And granted further MOST of you couldn't care less, because let's face it, most of you are more interested in cinder block collections than following Albany politics. As (my) state senator Kevin Parker pointed out to me in a super fun sit-down, though, there's a HELL of a lot of power in those bodies, even if it seems like three people decide everything. Andrew Cuomo - quite probably the ugliest of the 50 governors - seems to be all-powerful, but in fact it takes dozens and dozens of scary-looking-overachieving-angry-paunchy men to make the State truly dysfunctional. So...here's to you, Karim. For being soft-spoken, well-dressed and baby-faced. While I have no idea what you've done for us, I expect it's both more and less than we expected.

In all seriousness this is always an opportunity to think about what sort of person we want representing us when no one's watching. It's an exciting district - lots of change, lots of character, and plenty of characters.  And so, just days into his new term, Karim bids us adieu to yieu and yieu and yieu, meaning a special election will likely be called and we can breathe again knowing we are once again represented. Til then, try not to take unnecessary risks.

Want to know if the 43rd is YOUR district? The Q's got you covered: 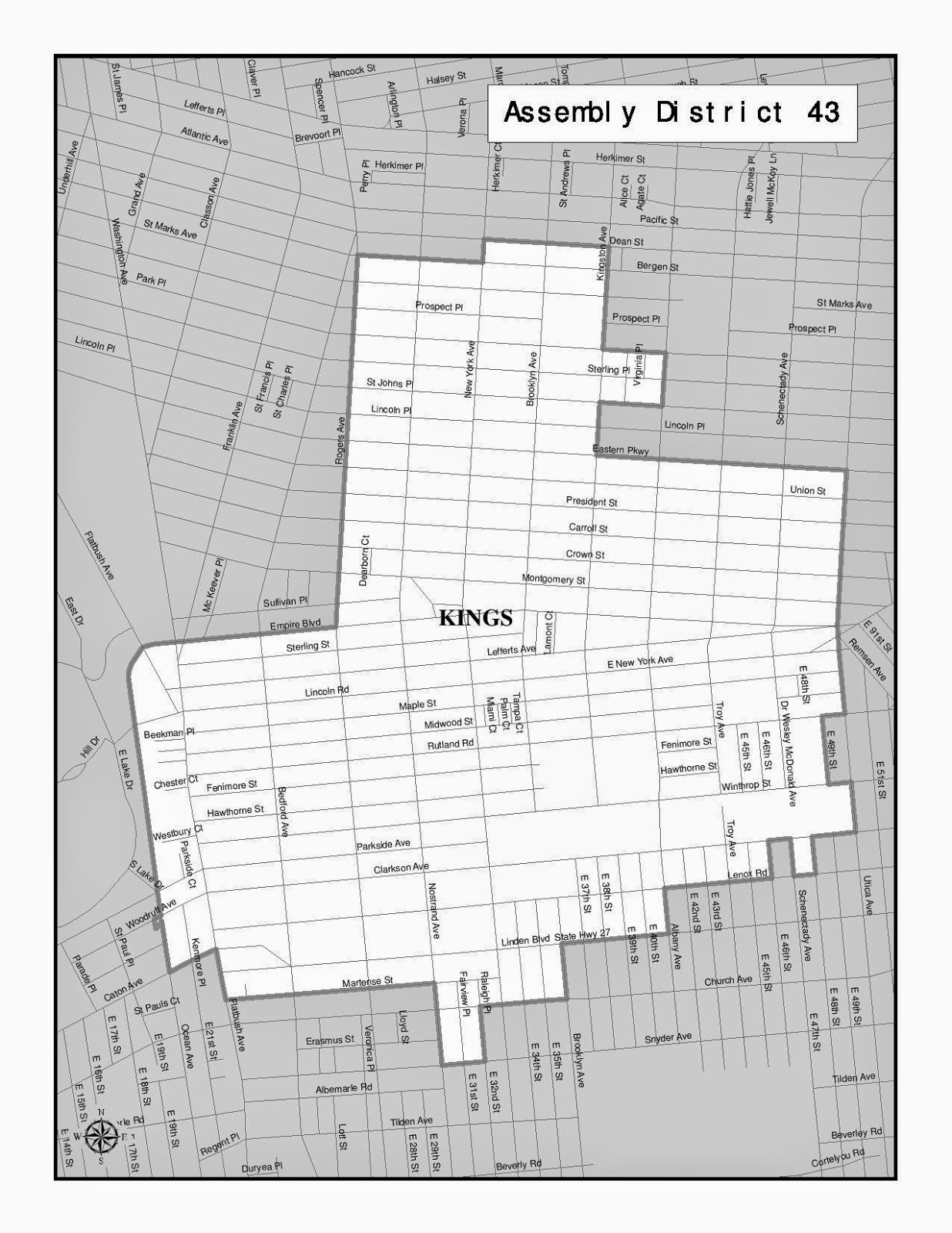 Posted by Clarkson FlatBed at 11:07 PM

"Andrew Cuomo - quite probably the ugliest of the 50 governors..."

In fairness to Gov. Cuomo, google "Governor of Delaware" or "Governor of Nebraska." Better yet, try "Governor of Kansas" — an ugly man with even uglier policies...

Lots of local characters look like they will be joining this race:

And how does Cuomo's physical appearance have anything to do with his job performance or the price of tea in China? What if he were female and you'd said she was the prettiest governor - you'd have the media crucifying you all over (and not without justification).

On a more serious note - Rubain Dorancy and Diane Richardson are both reported to be looking to run in this race. I voted for Jesse Hamilton vs. Dornacy because I knew him better, but I've heard really good things about Dorancy and had I had more time (if he'd campaigned more actively) I might have gone the other way. Just please, not you-know-who, the disruptor of community board meetings and MTOPP tool.

Oh Babs. I'm poking fun. He's the guy with all the power. And let's face it, he's damn ugly.

Now...as to whether it has anything to do with his job performance or the price of tea in China? Of course not. This is not the NY "frigin" Times now is it?

And I may be a blowhard, but I'm no fool. I wouldn't comment on a female politicians looks to save my life. The fact that I think Barbara Boxer is va va voom I'll keep to myself, thank you very much.

Rubain and Diana are awesome. I would be proud to call either my rep. Gotta say I like to put females in these positions. I'm generally more distrustful of men politicians.

Am I being sexist? Or just sexy?

I know you were kidding, Q, but what's sauce for the goose...so maybe we shouldn't say anything about anyone's looks (and I don't think he's THAT bad, BTW).

You may think my remarks saucy, but I guess what we're learning here, Babs, is that your sauce and my sauce aren't the same sauce.

On my ideal table, many sauces co-exist peacefully. Some are spicy; some sweet. And yes, I do sauce the gander a bit more spicily than the goose. Is this a double-standard? I like to think that I'm just doing justice to the strengths of each bird.

To my sauce sense, Cuomo is not a comely gander. I'm glad to know, Babs, that you're gentler on his visage than I. Perhaps it's best for the human race if we don't all favor the same geese.

"[Karim Camara is] moving on to lead something you've never heard of and probably don't care about so I'll spare you the details...."

Actually, I care, and maybe we all SHOULD pay some attention. Rev. Camara will be heading up a new government program called the Office of Faith-Based Community Development Services. Sounds innocuous enough, right? It's only a $50 MILLION grant for "religious-based social services." Like, what could possibly go wrong?
Well, if history is any indication, you might find your tax money going to Catholic "nurse practitioners" admonishing pregnant women about why they must not even consider having an abortion. Or evangelical "counselors" instructing gay youth how to convert to hetero-righteousness. Or Hasidic "family advisors" scolding battered women to respect the primacy of their husbands. And on and on, all under the "social services" umbrella.
As far as I can tell Mr Camara has been a pretty good Assemblyman. I'm not accusing him of anything. But programs like this—giving tons and tons of money to religious organizations who can hide behind a cloak of piety and are rarely held accountable—make me very very wary.

I agree - there is a lot of potential for abuse here, but I see it more with funds going towards the two Crown Heights evangelical/Baptist/Christian churches Karim Camara is associated with (including one at which he is still the senior pastor). However, it could also be a positive force for good - the church is an extremely important part of a lot of peoples' lives in the area, with the potential to make a difference in many areas. Hopefully Governor Cuomo will keep him in line.

It's actually quite savvy to create offices like this, because it allows one (Cuomo in this case) to give the illusion of access to a HUGE part of the electorate without actually having to campaign too heavily or commit too deeply. Give a little here, a little there, hold a conference, shake some hands.

Look Cuomo's gonna run for president, and he needs to make new friends. And this is an easy and painless way to do it. Plus, he pumps up his bonafides in the black community. Cynical? You bet.

If you hadn't noticed, I don't trust that Cuomo guy one damn bit. There is something deeply unsettling about him and when I figure out exactly what it is I'll tell you. See, I've got this ace Dick Detector and it's buzzing like a chain saw whenever I see his face. Did the same thing with Spitzer and Weiner and that guy who sells fruit at the corner of Flatbush and 7th Avenue each late spring through summer. Even the way he washes a grape with that spray bottle and gives it to me as a teaser makes me squirm. Buzz, buzz, buzz...

Diana Richardson and Rubain Dorancy are the only two candidates I will support. Have met Rubain and find him to be a decent, capable and knowledgable man. Diana is exceptional. She was born, raised and educated in the Crown Heights/PLG communities and have proven her dedication for the community concerns consistently.

Yes - I too am a Diana Richardson supporter and support her bid for the vacated position without hesitation. She is extremely passionate about our area and works her a#$ off!

Diana Richardson is stuck in 1960's thinking when it comes transportation, but I could see her being an effective representative on other issues. I've heard good things about Rubain Dorancy, but honestly I don't him well enough to vote for him. The rest of the field proposed so far would be pretty disappointing to see go to the assembly.

As for the Governor.. lets just say Pataki was better for the City of New York than Cuomo Jr. I can not believe he won't even speak to how to fill the 15 billion dollar gap in the MTA's 5 year budget plan and instead proposes a nonsense half billion dollar LGA train, he is building a 4+ billion dollar bridge where fixing the existing bridge would cost peanuts, disbands corruption probes as soon they start to find dirt, proposes saving $10 million by cutting PATH night service after vetoing a reform of the agency that spent billions of dollars on a single PATH station, to say nothing of his hamfistedness with teachers and destructive tax policies. It's nutty that he thinks he can run for president, but at least we will be rid of him when he runs and loses.