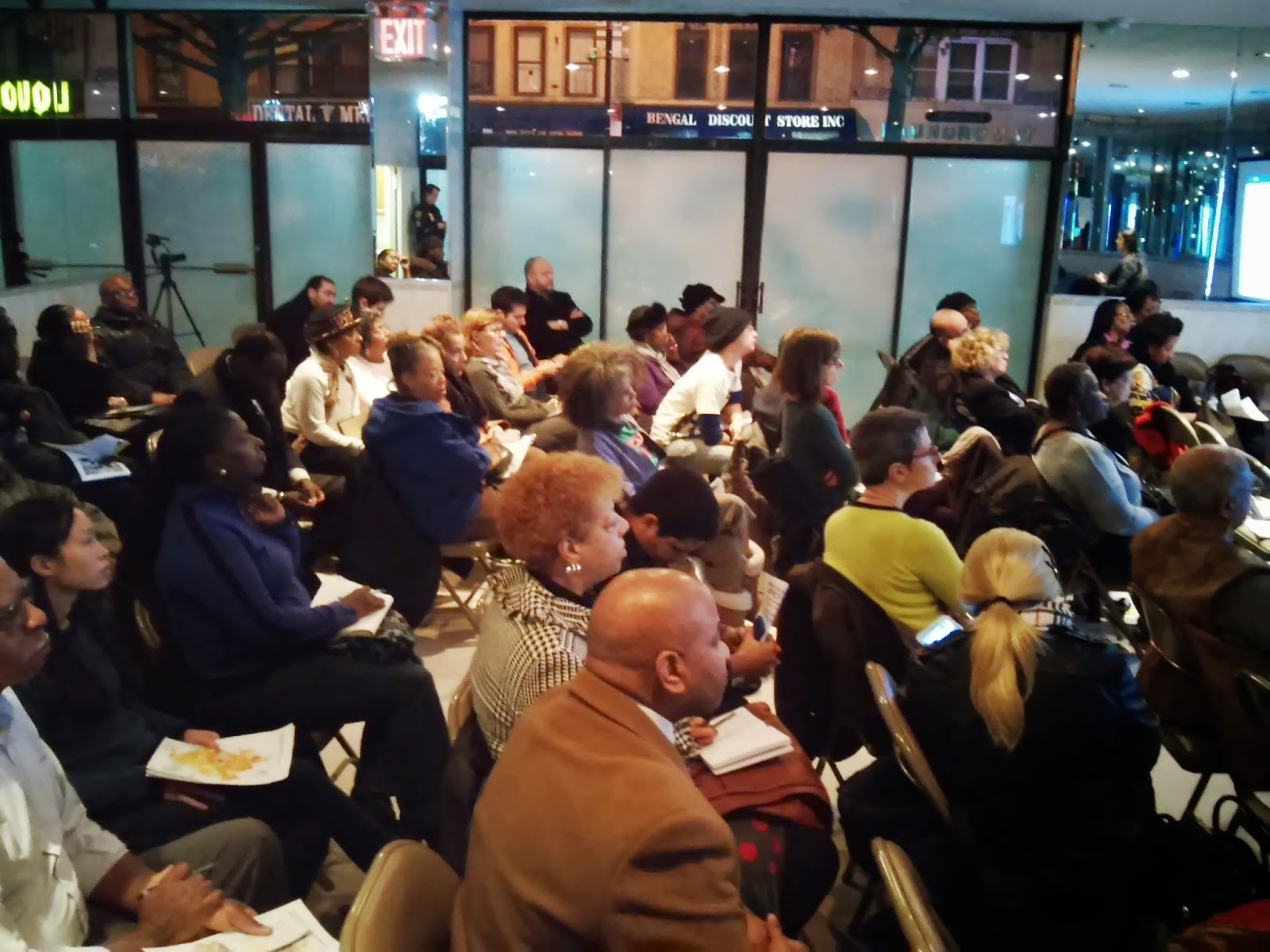 You know what the Q loves to see? And I've seen it more than once. Councilwoman Laurie Cumbo sitting up there in the front row listening intently. There she was, not bragging or wagging her finger, but just listening. Being part of the group. Learning things. Very, very cool. One might even be forgiven for thinking that she gives a damn.

Other than that tonight's community "training" session at Crown Gardens (that complex on the east side of Nostrand tween Carroll and President) was pretty tame. Alicia Boyd made a lot of racket, sounding off like she was more the expert than the three professionals with Master's degrees and decades of experience between them. Granted I left around halftime, and there was plenty of time for things to get out of hand. Maybe they did; please share with us! But the first half didn't see a lot of ball movement, just the usual hard earned first downs and punts. As usual, the zoning experts were clear and calm.

One thing did become abundantly clear. We need contextual zoning for large swaths of the district. The "Quality Housing" rules that go with "letter" distinctions like R6A or R6B or R7A would go a long way to preserve the character of the neighborhood. Nearly half the district is R6 for instance, and you can create an awful lot of Fedders buildings with all that real estate. You can build tall too if you grab enough land, so the strict height limits would be welcome as well.

I rode my bike home, past the beautiful blocks of Crown and Montgomery. Even if they don't become landmarked, Quality Housing designations could help preserve their context, maybe even prevent developers from buying them up in twos or threes to build new. Past Ebbets and Tivoli, past the new developments just north of Empire, then...Empire. And it really is shitty city down there. The Western Beef is fugly, and that parking lot is way too big and kinda creepy. The damn fast food gauntlet. The storage spaces that barely employ anyone. And then I really got it. Alicia doesn't want to lose her sense of air and space that the WB provides. It's very open there - you even get a nice bit of sky. I find it god awful and mugger-heaven, but perhaps if I lived on Sterling I'd be fond of it. No matter that a developer could buy up Western Beef right now, without rezoning, and build a tall hotel - maybe 15, 20 stories if it were skinny, which it probably would be with the park and garden views. Heck from the top you might be able to see over the Park and Greenwood Cemetery's tallest points right to the harbor. And those sunsets...those deep chemical New Jersey sunsets. Breathtaking. Book me the honeymoon suite!

So I get that. If that's at the core of all this nonsense, I wish she would just come out and say it. The fact is...something's going to go where the Beef is. It may even be in the works. The question worth considering is...wouldn't this be a great place for housing? So more people could enjoy the great transportation, the Park and Garden, and some of those units could be mandated affordable? I just don't get it. But then, there's always the other reason to leave it zoned for crap commercial, or C8-2. Tradition!!


Posted by Clarkson FlatBed at 9:06 PM

Do you possibly think that Alicia Boyd is being payed by developers? There is way too much money to be made along Empire and the rest of PLG. I heard Toomies property just sold for $3,000,000.

Here is the type of development that is coming to even the small lots: http://newyorkyimby.com/2015/01/permits-filed-371-lincoln-road-prospect-lefferts-gardens.html#

No, I don't think she's being played. I think MikeF would back me up here...the "greedy developers" are not interested in our little tit for tat. They're buying and developing all over, and are hardly waiting with baited breath to pounce BECAUSE of what's happening at CB9. We don't have that kind of influence, and besides the process will take a couple years. They'll be in and out before any changes happen. WE're the ones with the longterm interests of the neighborhood at heart. And Ms. Boyd is very much committed to her own thing, which is taking down the powers that be and painting us all as racist traitors and pawns. She has lashed out at pretty much every single official, government employee, and neighborhood volunteer or advocate. She sees conspiracies everywhere, and she's being coached by other conspiracy theorists.

I see no reason to believe she's anything but herself, and she's the one who has to go to sleep with herself at night. If she's convinced she's fighting a great crusade, then I believe we will be dealing with her for years to come. And it won't just be about CB9 and zoning.

Every neighborhood has their Alicia Boyd. We're not that special, and neither is she.