If you've lived in the area long enough you know that on Church Avenue between Flatbush and Bedford there was once a great Kingdom of Ital. The king lived at the Veggie Castle, and his minions flocked to his brilliant cooking. Having vanquished the fierce but tiny people of the White Castle, who feasted on burgers barely bigger than a Kennedy half dollar. What the war was about no one can remember. Perhaps it was a fight over whether dairy and beef belonged in the human diet? The war lasted so long that the children of the children of the children of the instigators had forgotten the real reason. And eventually, Rastafari was victorious, though much like the Hagia Sophia turned mosque from cathedral in Istanbul, the new regime merely retooled the old structure for its purposes. The effect, was both hilarious and prophetically conservationist, and certainly indicative of the area's changing peoples and customs. 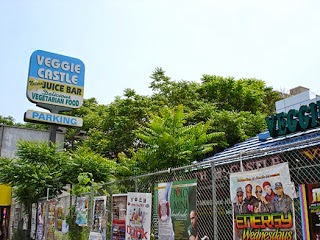 Enter the latest conquistadors and their syrupy sweet victory over the forces of Jah. Having built a modern castle brilliantly disguised as a drab and nondescript suburban office structure, the internet obsessed people of HOP have finally made home. iHOP they call it, and they intend to seduce the peasantry with a dozen forms of sugary topping for their puffy flatbreads.

Is this progress? Depends on your culinary preference. Tiny greasy burgers, boldy spiced stews and greens, or griddle-gluten with margarine and faux maple syrup. All fill the belly at the relatively little expense. Yet they leave the alimentary in wildly different forms.

Is a delicacy combining all three cuisines far behind?

This is a great picture of what was there before the new building went up. Thanks. The White Castle, then Veggie Castle, and now...bland Americana, the latest version...

sure, but when does it open?

just what this neighborhood needs - a fast food chain that liberally includes high fructose corn syrup in its menu.

Ugh no! Just bring back Veggie Castle. That place was the jam!