Public Housing - Why the 40 Is Half Full

A Supreme Court justice grew up in NYCHA. As did half the important hip-hop artists of our time, and poets, and teachers and city workers and any number of people who now make enormous contributions to our culture, City and society. Why would we give up on the idea, and the very buildings themselves? No one is seriously contemplating tearing them down. As you can read for yourself, an effort is being made to add much needed housing on City land, particularly by adding apartments to the projects themselves where land is available, often in the form of parking lots that are often not at capacity, for obvious reasons.

Most people probably don't know that the vast majority of people in NYCHA pay rent - up to 1/3 of income. Now, I know that sounds like a sweet deal these days. But isn't affordable housing supposed to be just that? It used to be 1/4 was considered affordable. 1/3 seems to be the new normal to describe someone who isn't overburdened by rent.

The below is a glossy version of reality. But imagine, if you will, that the real NYCHA lived up to the standards here...and all we had to do was invest more money, money that we and the state and feds HAVE, if we actually admit the money we SAVE from public housing, good, decent public housing. Would any NIMBYist even consider supporting public housing in their neighborhood? Probably not. Because we don't really think big anymore, and frankly, the community boards and local gentry don't care much for big thinking.

When FORCED to deal with the reality of poverty in the City, though, people do. Ask the good folks of Boerum Hill or Red Hook whether their investment in a house was a bad one, and whether a lot of their initial fear was unjustified. It is still, at least for now, New York Fucking City. 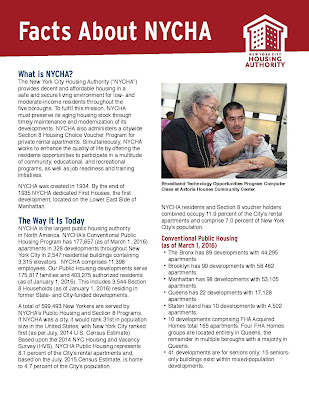 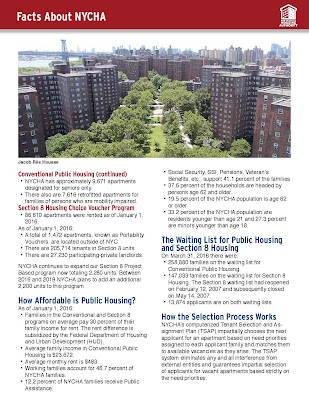 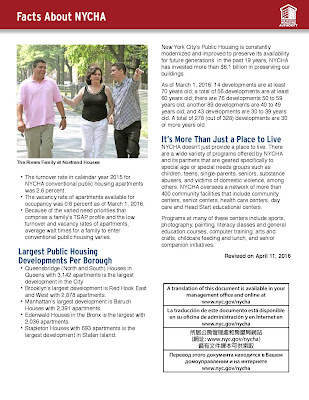 Posted by Clarkson FlatBed at 9:34 PM

As you note, such housing requires a subsidy. Now that the state, city and federal subsidies are drying up, they have to develop adjacent land.

The books have to balance.

Q: "Why would we give up on the idea, and the very buildings themselves?"

A: "For the federal government, It's cheaper that way."

Link is to a really interesting piece on the interaction between climate change, the loss of public housing and the state's unwillingness to replace it. Apparently much of America's public housing is built on what was at the time cheap undesirable land, which is now, more prone to be impacted by natural disasters.

"Storms and flooding are damaging or destroying a growing share of the nation's 1.1 million public housing units. Those homes are getting replaced slowly or not at all, forcing the people who lived in them to leave their neighborhoods and often their cities."

Not many people have noticed, but Red Hook, Far Rock & Lower Manhattan Public Housing rocked by Sandy is STILL recovering, 4 years later. I know people who've had to leave NY. Getting money for rebuilding is like squeezing water from a turnip apparently:

I dunno about that 40 being half full Bro. Official indifference seems to be the order of the day for Public Housing.(same refrain for many other public services.) Preciate your optimism though.

Maybe my sample is badly biased, but rappers rapping about public housing do not typically extoll its virtues – exactly the opposite actually.

Or are you advocating that people should suffer so that others might enjoy great art?

They're not all just "rappers" and they don't just rap about "public housing." If you don't like hip-hop, that's cool. But knocking the art requires at least some facility with the form. Otherwise it kinda sounds like "my kid could do that." Barbra Streisand and Neil Diamond get touted as coming out of Erasmus. If you're suggesting that Jay Z is any less talented or deserving of recognition, I think you may be showing either your age or your cultural bias.

Whatevs. The vast majority of people in public housing (many of whom go to my kids' school) are totally decent working people, hardly the stuff of legend. They're largely black, latino and now significantly Asian. They work in all fields. They join their housing associations, they volunteer, they go to church, they route for the same sporting teams as the rest of NYC. They deserve better facilities and quicker repair, but beyond that I see no reason to knock the people, the buildings themselves, or the very idea of public housing on a grand scale.