From KFC To TD Bank 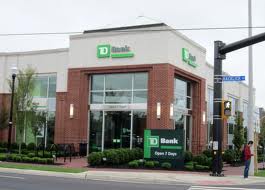 Man o Mano the News Is Coming Fast and Furious! You know that sad vacant KFC on Bedford across from the Ebbets Apartments? Turns out TD Bank has applied to turn it into one of its branches, complete with suburban style drive-thru.  This from a neighborhood tipster who actually know how to read those DOB applications.

I'm going to go out on a limb here and call this a net gain for the neighborhood. Too many greasy fast food joints, not enough places to stash your cash. Now, I've always made fun of the name of this Canadian banking franchise. Say it fast enough and it sounds like a topless bar.  But, these days, banks are banks. None of them have any character or stick around for very long. So what's to like or not to like? It's a bank!

For those who are interested in such things (I and I for one), TD's home is Toronto in a Mies van der Rohe skyscraper, and it/they became a player here in NYC when it/they bought up Commerce Bank during the near Great Depression of 2007. It became even bigger after buying Chrysler Financial, which while technically not a bank like you or I might think of it, was, since it lent people billions of dollars money to buy its semi-functional cars, which, since having been bought by Fix It Again Tony (FIAT), I'm told, have become quite a bit more functional, though I don't own a car and don't really care one way or tah other. Over the years, TD bought up all kinds of banks, including ones you might have heard of like Peoples and First Vermont. Kinda fascinating, right?

This is actually good news for an almost under-served neighborhood. Great location! I was kinda hoping some bank like TD would make use of the gorgeous historic banking structure at Flatbush and Caton (love that awesome Williamsburg-ish chandelier) which was originally built as Astoria Federal Savings, and recently vacated by HSBC.

thougt you should see some of these commments.

Email me at city.council40@aol.com if you want some more on this scoop. The article from CAW is bad journalism but I, and others, can verify that this a case of smoke when there is fire......

One request: Please refer to the complex as "Ebbets Field Apartments"; that is the actual name. "Ebbets Field Houses" makes the complex sound like the projects, which it is not (under NYCHA; it's a private complex).

And I totally agree that there are way too many fast-food joints in the vicinity-Burger King, McDonald's, Popeyes, and the new Checkers, whenever it opens.

A TD Bank would be a huge step forward.

This is great news, and I highly recommend TD (I have been banking with them since they were called Commerce Bank, probably over 10 years by now.) They are all over the city and Brooklyn, but the closest branch around here is probably across the park on PPW...any idea on how long it will take them to open?

...there are way too many fast-food joints in the vicinity-Burger King, McDonald's, Popeyes, and the new Checkers, whenever it opens.

The new Checkers? Opening? Probably never. The woman involved with the property purported to become the future home of Checkers is deep in debt and totally unprepared to meet the requirements for a Checkers franchise.

Anon at 1:01. I did switch it up, and you're right. Ebbets is not and was not City Housing - twas the VASTLY superior Mitchell Llama (sarcasm mine). Though according to many sources, the building has been plagued through the years by projects-like mismanagement and terrible gang violence (Folk Nation!) and drug problems. But if the point was not to denigrate the building by association, the use of the word "projects" as a pejorative doesn't exactly suggest you're shooting for political correctness.

Why criticize the Mitchell Lama program? It has provided stable, well-maintained, affordable housing for many New Yorkers over the years. The problems at Ebbets Field really began when it LEFT the Mitchell Lama program in 1987, with new owners who were not incentivized by city tax breaks to maintain the property, and who began attempting to increase rental income here by raising the rents and renting to unqualified tenants merely because they would accept those terms. Had it remained in the Mitchell Lama program, with apartments going only to tenants who qualified in terms of income and credit, the complex would not have deteriorated.

I had friends in college, baseball fanatics and urban studies majors, who actually made the pilgrimage out here in the late 1970s, and met with residents of the complex, who actually took them up on the roof to see the view. Residents described the buildings as a haven and an island of safety in a sea of criminality.

Babs: I'm so NOT criticizing Mitchel Lama. I'm criticizing people who knock the projects. City housing works quite well, actually, considering the population in question. Sure there are problems, lots of problems. But there are lots of problems with Michell Lama as well. Just saying that to characterize them as one thing or the other is to stereotype, which does neither any service.

As you should know, the Ebbets Field Apartments did not leave the Mitchell Lama program because the owners believed they'd reap a windfall by doing so.

For Mitchell Lama buildings constructed before 1974, those taken out of the program were required to abide by Rent Stabilization rules. Hardly a windfall. Plus, the owners had to pay off the existing mortgage and refinance.

The EF Apartments were early entrants in the M-L program -- getting in in 1957. In other words, by 1987, the original mortgage had reached maturity and decision time had arrived.

As you should know, today's rents in the 1,300 Ebbets Field Apartments are lower than rents in many of the nearby buildings.

However, it appears you might know the reason for the decline of quality in the buildings -- lack of control over who moves in.

In many way's the Ebbets Field Apartments have devolved into being just another housing project. Not the worst, but there's no comparison with M-L sites like Lincoln Towers in Manhattan.

I am aware of the rent stabilization requirements for converted Mitchell Lama buildings; however, these requirements are easier than the income specific and restricted rents for Mitchell Lama buildings. They weren't looking to get rich charging high rents; merely have an easier tenant approval process (Mitchell Lama buildings have specific minimum and maximum incomes). So not a windfall, no, but certainly an easier tenant approval process, and the ability to charge uniform stabilized rents (established at 1987 market rents). They were also free to accept government programs such as Section 8, seen as a key to a reliable and steady income stream by many in deteriorating neighborhoods at the time.

Re: .Though according to many sources, the building has been plagued through the years by projects-like mismanagement and terrible gang violence (Folk Nation!) and drug problems. But if the point was not to denigrate the building by association, the use of the word "projects" as a pejorative doesn't exactly suggest you're shooting for political correctness.

Hi. I'm the Anon poster at 1:01. I have lived in Ebbets Field almost all my life.

By the way, I remember when new management took over around 1988. Even though I was still a kid, the difference in the character of the apartment complex was quite noticeable.

Re: The problems at Ebbets Field really began when it LEFT the Mitchell Lama program in 1987, with new owners who were not incentivized by city tax breaks to maintain the property, and who began attempting to increase rental income here by raising the rents and renting to unqualified tenants merely because they would accept those terms.
Management did try at one point to turn the building into a co-op, which failed. Not enough takers.

marlowe, at least the Checkers building now has a sign on it. Progress seems incremental but slow. I bet the Checkers will open before that seemingly abandoned condo building on Sullivan place will.

UPDATE: I ran into a TD Bank representative at a health fair at Medgar Evers College. She said the grand opening will be the weekend of June 21 (both Saturday and Sunday).