Chester Court remains one of the odd treasures of the neighborhood. A series of Tudor-style townhouses on a cul-de-sac just off the "Low-Line" of the rumbling Q train, Chester is one of those blocks you WANT to walk down on a sunny afternoon, but you'd feel a bit odd doing it. Like Beekman and Westbury and Parkside Courts, Chester is a bit of a mystery wrapped in an enigma wrapped in a roti. And of the number of interesting families living down yonder, one of those cute houses belongs to the Bolton family. Never heard of the Boltons of Chester Court? (sounds pretty regal, doesn't it?) Well, the patriarch is heralded worldwide as one of the greatest American chefs - Saul Bolton.

Saul does not look the part of a chef known as one of the pioneering folk who put Brooklyn on the culinary map. When I met him last week for a coffee and chat in the park, he looked more the part of Soundgarden Fan circa 1993 than One-Star Michelin restaurenteur. (Not that I had been expecting Mario Batali, 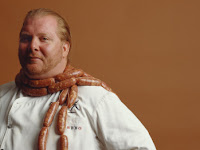 whose rosy mug I shan't miss if I never saw again, his foppish self depicted to the right for reference. While his signature "crocs" are out frame, I imagine that "sausage muffler" extending all the way to his toes. ewww. Toe Sausage. Ewwww! Though I suspect neighbor Saul could manage to make it quite tasty, even a serving of Mario Batali's toes.)

It seems that after a stint at #7 most hippy school Reed College in Oregon, Bolton saw David Bouley's picture on the cover of a magazine and realized he could not only practice his craft and love for cooking, he could make a nice name for himself doing so. So off to NYC he trekked, to apprentice for the master himself. And after a time, Bolton set up shop in the just-awakening Smith Street in 1999. Mrs. Q and I ate there not long after it opened, and were so impressed we've recommended the place to countless others, never really going back due to restricted funds and pure laziness I suppose. The Michelin Man gave him a star, which unlike record reviews means you've pretty much surpassed every colleague around you for superior food, service and presentation. There's only one other "new" restaurant in all of Brooklyn to earn the coveted "Michelin Star" - Colin Devlin's Dressler out in Billyburg. That's how intense is the competition! (Luger and River get one, but they've been listed for ages apparently).

But I'm not a foodie, and have no desire to watch celebrity chefs prancing about on the TV, cable or otherwise, so I was pleasantly surprised to find that Saul's the kind of smart local dad that you can talk to about just about anything, including Wendy's hamburgers and my own specialty, toasted Monterey Jack quesadillas. I started to realize while talking to Saul that there's a lot in common between the food and music bizzes, and so it's not surprising that "FOOD" has been called the new "ROCK N ROLL," though I can guarantee I've never boogied down to anything made of quinoa or back bacon.  (I'm trying to picture Grand Funk Railroad singing "We're an American Bistro," and the picture's kinda fuzzy, even with my Radio Shack rabbit ear antenna).

But yeah, lately music rags have been really, really into top ten lists, and top 100 lists and complicated rating systems (Pitchfork.com) a la Zagat's. And I'll take it a step further and say that cheffing seems very much akin to songwriting, a craft that I'm still trying to perfect after 35 years at least two hundred completed attempts at "the perfect dish." Clearly Saul Bolton has one of those rare gifts that come along only so often, and he love-love-loves the feeling of putting it all together and getting it just right. The Q's idea of a perfect song? Check out "Daughter" by Loudon Wanwright, III, though of course I'm a little biased given my four-year study in hands-on parenting. "Penny Lane's" not too shabby. "Tangled Up In Blue?" "Everyday" by Buddy Holly?" Just about anything by the young John Prine? "Waiting for the Silent Boatman" or "Can You Get to That?" by Parliament/Funkadelic? "Bye Bye Pride" by the Go-Betweens? "Beep" by Pylon? "Have You Forgotten" by Red House Painters? "Edelweiss?" "Maybe" from the musical Annie? Or beyond Edelweiss, ust about anything by Rodgers and Hammerstein? (Wow, I'm really showing my background now!) Hey, I was in "Oklahoma" twice growing up, playing Jud AND Will, then Emil in "South Pacific." That stuff really stays in your ears like wax!

Bottom line, I think it's pretty darn cool that one of NYC's greatest chefs lives right here among us. He loves taking Dollar Vans, especially after a long night at the restaurant he started, Saul. He's also opened The Vanderbilt (on Vanderbilt!) and Red Gravy (neither on Red Gravy street, nor named after someone named Red Gravy, though I am considering changing my name). If you want to explore Brooklyn's culinary revolution, you'd be well served to try all three.

NOW...to the all-important question that I was so inclined to ask that I forgot during our actual conversation and had to email him later for an answer.

Q's Q: What food could you recommend right here in the neighborhood, if you could choose but one joint?

Anything from Scoops- he rocks - ital.

Folks, I don't need to state the obvious. One of the most trusted chefs in town just gave you a rock solid recommendation for a local take-out hole-in-the-wall on Flatbush that also serves fantastic vegan ice cream. If you haven't tried Scoops ital (pronounced eye-tahl, also known as Rastafarian) food, get thee over there and don't be shy. If you need further evidence of Scoops' reputation, there's always this NY Times review.

And to Saul, all I can say is, see you at one of your joints right soon.

Went to hos restaurant for our 8 year wedding anniversary. It was great. We pick a fancy place to explore every year.

I never realiazed he lives here in PLG - that's great. Maybe he and his wife should open a restaurant here! Have also eaten at Saul a few times. Just FYI Mr. Q, Peter Luger also has one star and Brooklyn Fare has 3 stars.

Didn't know about Mr Bolton's expanding enterprises ... will try to check them out.
Saul was wonderful the few times we were able to go.

Really like your list of "perfect" songs. Especially the nomination of John Prine. I've long maintained he is the most underrated songwriter ever. I think what amazes me most about his work is how he does so much with plain-spoken language and 3 or 4 chords.

Ever hear the story about Prine's early career? Perhaps apocryphal but a great story nonetheless:
Back when Prine was a mailman in Chicago he'd go to various open mike nights at music clubs. He'd have a few (or more) drinks and begin heckling an unfortunately untalented aspiring singer/songwriter until he got an "okay smartass, you think YOU can do any better?!"
And then Prine would get up and do "Sam Stone" and "Hello in There" and "Angel from Montgomery" and "Six O'clock News" etc. etc. and blow everybody away.

Ooops sorry. I forgot this wasn't a music blog...

I've passed by Scoops since I was a kid, but never knew anything about it. I may actually have to stop in and check it out!