Public Plazas For Lefferts: Come Out Tuesday to Support!

It's finally time to vote. The Community Board has placed the two items the Q cherishes most onto the agenda for next Tuesday night's meeting. It's public, and your thoughts and attendance are most welcome. I'm extremely proud of everyone involved, since it's a mammoth task to get the attention of City agencies and to move forward with BIG ideas. And these are very big indeed.

We decided to present the two at the same time on the same night to allow the most people possible to see and hear the presentations and to share on them. Come out and share folks. Let's see your faces!

Up first is the fabulous Flatbush Trees project, as conceived by local artist David Eppley and coordinated and partnered with PLG Arts. The proposal itself won committee support from CB9, and has led to a whole discussion of the use of the plaza generally. And so now, sketches and design ideas have been generated beyond Eppley's excellent long-term temporary public art project to retake the entire parking lot from the "squatters" parking there and build something permanent for the whole community, perhaps even changing the entrance to the train station to make better use of the plaza. Below are both Eppley's junior-high-school student aided art piece, then Johannes Knesl's initial designs for the whole plaza:

Then after David shows his design, look for the Parkside Project crew to tell you all about the plans, hatched 100% in conjunction with DOT's Plaza Program, to deal with the plaza in front of the Q at Parkside. In Cho's latest design below, and a new website is up: 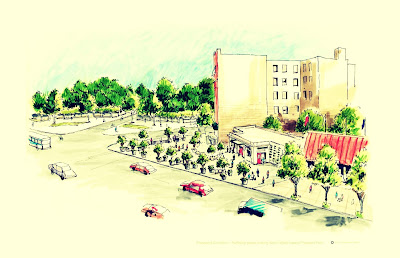 Both projects will require sustained community support and some initial funding from all of us, along with City money from elected officials like the Councilman Eugene and (the next) borough president Eric Adams.