It occurs to me that there are some of you too new the neighborhood to recall the sorry state of 205 Parkside just a couple years ago. It's still no great shakes, but a lot of lipstick's been thrown on that pig in order to open it someday as a "long-stay" hotel. It was retrofitted to that purpose, not unlike other Fried buildings in the area (on Woodruff) and elsewhere in Brooklyn whose ultimate purpose became either SRO or (in the case of the Lefferts Hotel and others) hourly fleabag hooker hostel. Those of us who have met, or know anything about, notorious scumbag Moses Fried, will tell you that he is not to be trusted any farther than you can toss him. Given his slight frame, and my large but still relatively strong though rusting middle-aged physique, I suspect I could heave him about three feet. Which means, I don't trust him more than three feet. Just trying to be as literal as I can about the matter. More background here. And here. And here. And here's what it looked like, not so very long ago: 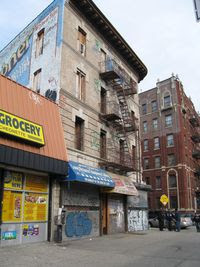 So he owns other properties like the notorious "Lefferts Hotel," which is actually in Bed-Stuy, which by the way much of which actually started getting called Clinton Hill by clever people trying not to live or sell property in Bed-Stuy, and if you don't believe me just ask people who used to live in the area way back, and IF the word Clinton Hill was or wasn't used to described a tiny portion of what is now called that, which of course now has cache all its own, though I can guarantee if crime is your main concern you'll be moving sideways to move to parts of Clinton Hill and much of Bed-Stuy, though Ft. Greene has gotten remarkably quiet in the time since I've lived in NYC, now ranking among the lowest-crime nabes in Brooklyn, now where was I? 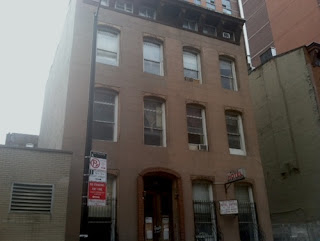 Oh yes. According to reports, Moses Mike is about to clear $5 million for the above troubled hotel property on Schermerhorn, a dumpy dump so sordid it even had its own incredible story of being robbed floor to roof at one point in what seemed likely some sort of insurance scam. So the guy named after the sea-parting man has a little more cash flow, perhaps to finish his joint at 205 Parkside and get it open? Just taking a peek inside the "lobby" shows he has little interest in running anything more than he's done in the past. His big mistake this time is that we're not going to let him even get going with his "business model," are we? With 20,000 or more neighbors walking past every day, there will be plenty of eyes on the property. And you can count on the Q not to let go. I'll now happily take credit for the below mock-letters placed on the building a couple years ago, so yeah, the guy and his building really bug me and I'll personally stay on the story til he either sells of gets right with the law. Btw, David Tepper, it turns out, is his grandson. So when the octogenarian eventually heads to the land of eternal rest for slumlords (I hope wherever that is they have lots of cockroaches and infrequent running hot water), Tepper will be the man in charge. 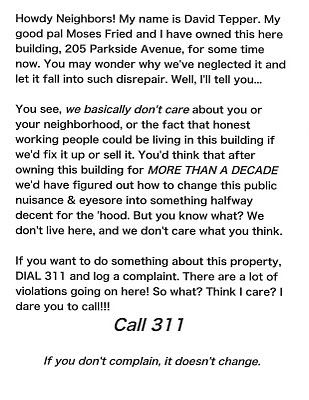 Posted by Clarkson FlatBed at 7:23 AM

The Lefferts Hotel is called that because it is on Lefferts Place (yes, there's a Lefferts Place and a Lefferts Boulevard in NYC, in addition to Lefferts Ave, where I live - those Lefferts got around). This is another reason referring to our neighborhood merely as Lefferts and not the full Prospect Lefferts Gardens isn't a good idea - it only adds to the confusion.

And before Clinton Hill became lumped in with Bed Stuy, it was known as Clinton Hill - this was in the 19th century, when the Pratts basically owned the area, building mansions all over. After the neighborhood went downhill it (and even Fort Greene) became assimilated with Bed Stuy. So yeah, you may find some old timers in the area who say it's all Bed Stuy, but that's just because the people who knew it as Clinton Hill are all dead.

Actually just "the Hill" and it included the present Ft. Greene. The Hill was THE place for Brooklyn's 19th Century nouveau riche.

Maybe Fried is trying to divest. That is what I am hoping for, at least, because then there is a prayer that he'll sell the property to someone who will put it to good use... tearing it down and building a new development, for example.

why tear down? it's a perfectly fine 100 year old building. If he turned it into a ton of studio apartments at a reasonable rate, he'd fill it in no time. Right next to the park and train? Fuggedaboutit, it's a no-brainer.

Not saying it SHOULD be torn down, but having it torn down and replaced would be a better use than remaining in its current state or becoming a whorehouse. Agree?

Sure. Just saying it's a relatively low cost investment for someone wanting to get into the rental market over here. A tear down would be massively costly, and the dude just renovated it.

Rental apartments with a restaurant or coffee shop below - how great would that be?

What Bob said. As proof, here's the LPC's designation report from 1981 for the Clinton Hill HD: "By the 1850s major development began to move towards the east
up Clinton Hill. At that time the
neighborhood, generally referred to as the Hi11, was considered to
extend from about present-day Classon Avenue westward towards
Flatbush Avenue. The area between Flatbush and Vanderbilt Avenues,
now known as Fort Greene, did not acquire a separate neighborhood
identity until the twentieth century."

Q, glad you didn't admit to the other prank flier that was posted on 205 Parkside-which offered the building for free. Fried threatened to sue over it. Backstory here: http://www.hawthornestreet.com/2009/11/fried-responds-to-free-building-prank.html

Anyway, I can't comprehend how somebody could sit on a building like that. Three commercial units, 14 apartments in a great location. Back of the envelope calculation suggests a rent roll of $400K a year. What a short-sighted fool he is. At least there are windows in it, so it doesn't look terrible from the street any more. But what a waste.

Can we please replace it with modern housing like the ones found in Williamsburg? Would love for this nabe to attract more hipsters and yuppies. We need this. Add an environmentally-friendly see-through apartment building that looks like it's from the 22nd century. Parkside will shine and it'll look like you're not even in PLG.

Also, a Connecticut Muffin on the bottom wouldn't hurt.