After many, many years of sitting fallow, the once rugged Caledonian Hospital is set to return from the dead like a great Scottish Lion. That is to say, rather than having to become ill or heavy with child to take up room at the Great Inn of Caledonia you can now rent a studio, one, two or even three bedroom apartment for (probably) anywhere from 2 to 3 thousand Simoleons, who knows maybe more. And while literally thousands of Brooklynites breathed their first sweet breath in the building now dubbed 123 on the Park, it was never a beautiful building. But it what it does have in spades is an abundance of front lawn. That lawn, divided from the Castle by a two-way moat named Parkside Avenue, is known to locals as the Park of Prospect, and in the following video from the newly operational website 123onthepark.com, you can see that it is the SOLE reason at this point to consider buying a condo therein. Take a look:


Nary a word about the building, the laundry room, the price, the size, no floor plans or ceiling plans, nor even closet sizes nor whether there's on-site parking. Just pictures of the front lawn in all its warm weather glory. Makes you wonder if they're renting apartments or campsites.

But I did capture the rendering, poorly, one night a couple months ago, so we do know that the end product will look something thusly, though probably less blurry and reflecty: 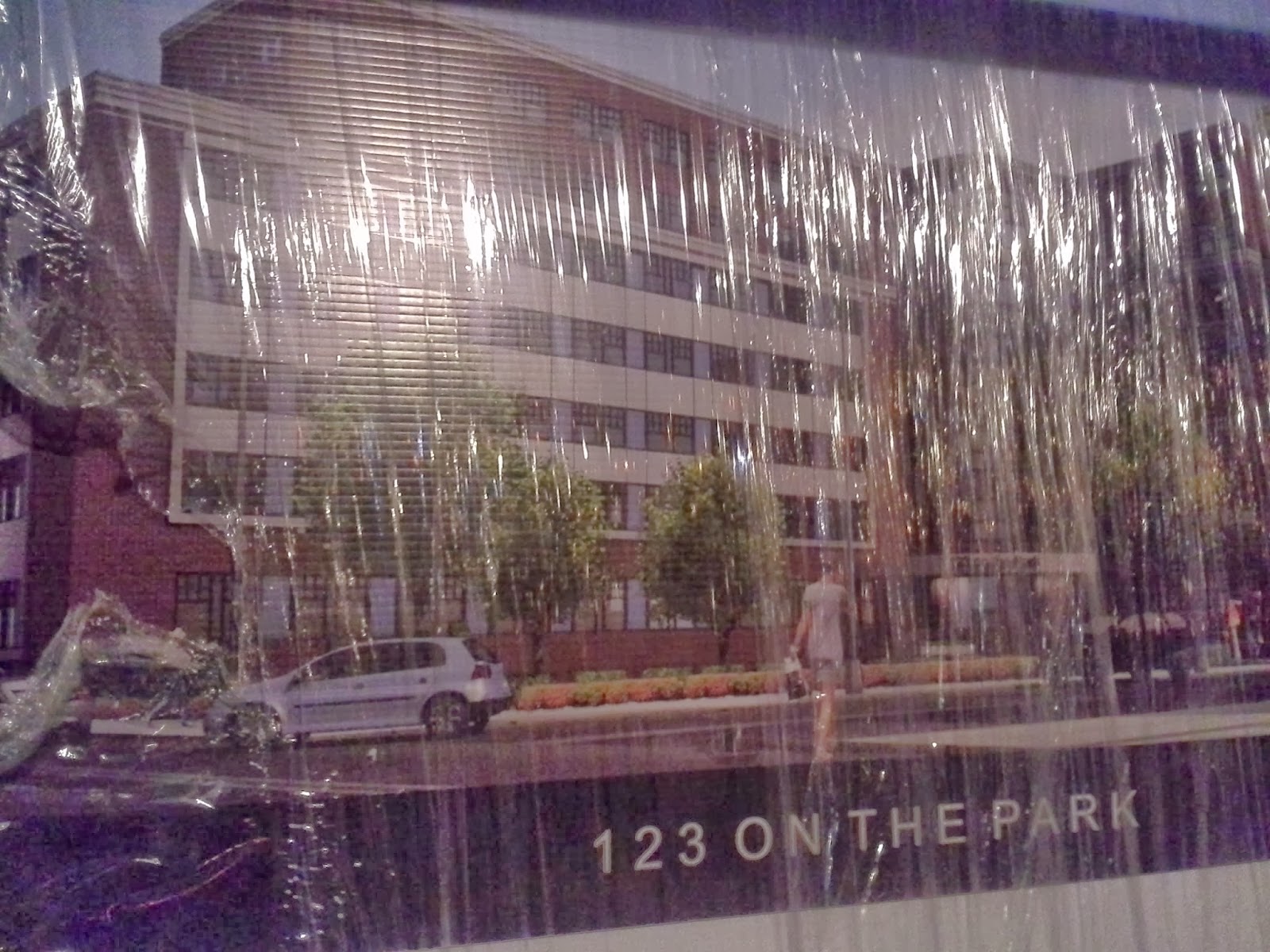 Unless the development has been led by Christo and Jeanne-Claude, wrapping the building in, say, Saran wrap, it will likely NOT have a shiny transparent plastic veneer as above. It IS however an 80/20 building in the sense that 80% of the residents will be skinny tall white women (pictured) and the remaining 20% will be set aside for "other." Overweight humans need not apply, but there will be a certain set-aside for fat pets.

There's still room for more building (I haven't investigated what's happening with that - last I heard there was trouble getting permission to build a new second structure), but no politician or power-broker ever expressed any interest in engaging the buyer Chetrit in any way. Where the mere mention of an out-of-context dormer might cause ear-shattering gasps on the Slope side of the park, you could hear the sucking sound as you exit the air lock into outer space as the world basically said "really? they're going to do what with that? are you serious? who? why? okay, whatever" and moved on to talking about the latest culinary "find" along Vanderbilt or Dekalb or Franklin or somewhere in Bed-Stuy. Despite it being one of the most major projects along the second greatest urban park* in the world in decades, 123 has flown pretty much under the radar. This to me a sign of what has long been Flatbush's backwater status, that the building would go from hospital to poorly run medical arts center to abandoned property to luxury apartment building without so much as a whimper from pols or outcry from block associations or community boards or anyone getting up in arms about the trash and graffiti over the last many years. I mean am I overstating it? It's really, really odd.  In a certain way, this building has been a stand-in narrative of what was and is and will be of Brooklyn herself. From its old-world beginnings as an outgrowth of the post-turn-of-last century's gentry's concern for the health of their poor countrymen (the Scots), to its new post-turn-of-this century's concern for the health of the new gentry (the Hips), Caledonian has lived a century of change.

In fairness, this is about as good a turn of events as one could hope in the current environment of, ho hum, laissez faire blah and blah. Roughly 100 years ago folks of means were scrounging together coin to create a hospital for mostly indigent immigrants (check out this wild page from The Caledonian) to build the hospital below, the first structure of which was basically a converted house and eventually the building to be luxury condos as we know her today: 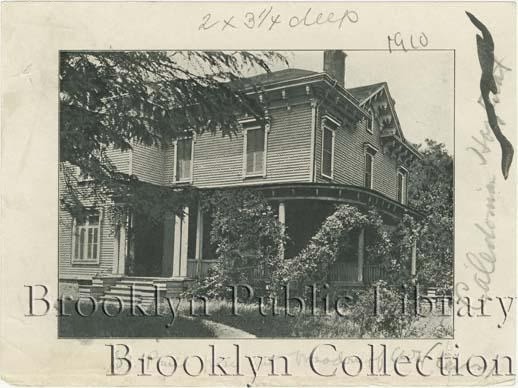 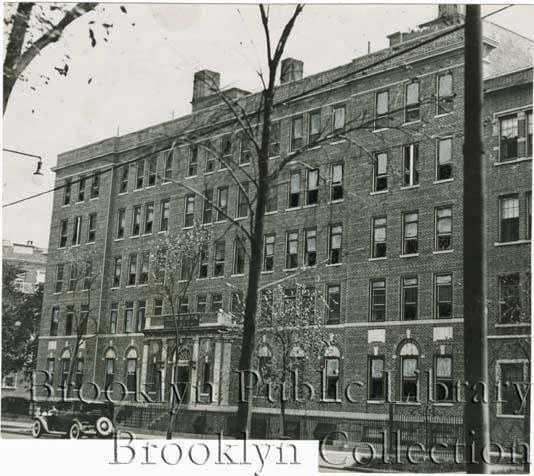 Early in my Brooklyn years a friend was rushed to the E.R. here. Ah, the memories!

Its a big wheel that keeps rolling.
The First Gentrification of Brooklyn.

The plan was for General Putnam to direct the entire defense from the fortifications on Brooklyn Heights. Generals Sullivan and Sterling and their troops were to be positioned well forward on the "out work" of the wooded ridge, to cover the few main roads or passes through that long, natural barrier. The Gowanus Road was on the far right, near the Narrows. The Flatbush Road was at the center and thought to be the way the British would come. A third, the Bedford Road, was off to the left. All three were comparatively narrow cuts through the ridge and thus "easily defensible."

This video reminds me how much I love Brooklyn and our fast-paced lifestyle.

Residents forced to live without water in toilet, flooding ceilings, leaky radiators and a front vestibule door that never closes at 115 Ocean Ave.

Moluba Kollie, 30, has complained for years about the conditions inside his 3-bedroom apartment on 115 Ocean Ave.

Reuven Blau/New York Daily News
Moluba Kollie, 30, has complained for years about the conditions inside his 3-bedroom apartment on 115 Ocean Ave.

The city has named 115 Ocean Ave. in Prospect Lefferts Gardens the borough’s most problematic slum building and has targeted the six-story apartment complex for repairs.

Situated across the street from Prospect Park, the complex boasts an astounding 444 open violations for everything from peeling lead paint, roaches and mold to broken sewer pipes and a wide open front door, city records show.

“The landlord just doesn’t care,” said Molubah Kollie, 30, a resident at the building his whole life. “When they come to fix something one month later it’s broken again.”

That includes the toilet of one tenant who was forced to fill it with water from his tub for close to a year.

“There are plenty of problems here,” said another resident who declined to give his name.

Last Tuesday, the building, owned by Lincoln Prospect Associates, was one of the 187 apartment complexes placed in a city program that tackles the most heinous slums in the city, including a whopping 103 in Brooklyn.

The building was hit with another violation posted inside the wide open vestibule.

Reuven Blau/New York Daily News
The building was hit with another violation posted inside the wide open vestibule.

The Alternative Enforcement Program, created by the City Council in 2007, allows the Department of Housing Preservation and Development to complete emergency work and bill deadbeat landlords for the repairs.

The city has already shelled out $7,904 to cover emergency repairs at 115 Ocean Ave. since 2001, records show. Just $326 of that has been paid, according to online records.

Tenants say they frequently spot loiterers smoking pot and hanging out in the building’s vast entrance and hallways.

“The door breaks two times a week,” said Jean Pierre, 18, another resident in the building.

The building’s owner did not return calls for comment.

Besides 115 Ocean Ave., officials sited 84 Lawrence Avenue, 1059 Union Street, 55 Winthrop Street and 2 Stoddard Place as nearly as shoddy. Each had in excess of 300 violations.

Citywide, the new list of the worst of the bunch includes 55 buildings in The Bronx, 19 in Manhattan and 10 Queens.

“A severely distressed building puts the well-being of its tenants at risk and can act as a catalyst for destabilization with a community, and we are resolute in ensuring that does not happen,” said HPD commissioner RuthAnne Visnauskas.

Wow! Here is a Great Blog You Might Find Interesting that Encourage me for new idea of real estate. Crown @ Robinson floorplans Crown at Robinson Road (formerly Chow House) is a freehold commercial development comprised of offices and commercial shops component.

This Blog and you all are insane, You do not have the slightest clue of Flatbush.

FYI y'all Kasa Thompson is one of these twits who sends me hatemail calling me a racist Klan lover. If I end up chopped into a hundred pieces and stuffed in a box, I just want his name on the blog as a clue to the killer's identity.

These are the hateful jerks that Alicia has unleashed. Go to hell, Kasa. They'll welcome you home.