Were the name of the 'hood Prospect-Lefferts Garden (singular), tomorrow's meeting at the Brooklyn Botanic Garden (Washington Ave entrance - 7PM) would have special relevance for an issue very much in the minds of many Leffertsonians. Though I guess it's true there are a number of sub-gardens in the Garden. Maybe that's what they meant! Bob?

O.K., time to stop dicking around. As the last post should make clear, the neighborhood has been sleeping for years and it's time to wake up and take what little control of our destiny the City's Charter allows. Each Community District is allowed a say in the Universal Land Use Review Process (ULURP), and rather than let developers usurp our ULURP, it's worth coming out and expressing your opinions on the matter of zoning. While most folks don't care too whits about whether R6 or R6b is appropriate for, say, YOUR block, come on out and say what you like or don't like about buildings in the area in plain English. It's not that hard for the folks at City Planning to translate, since they're bilingual English/Zonish. 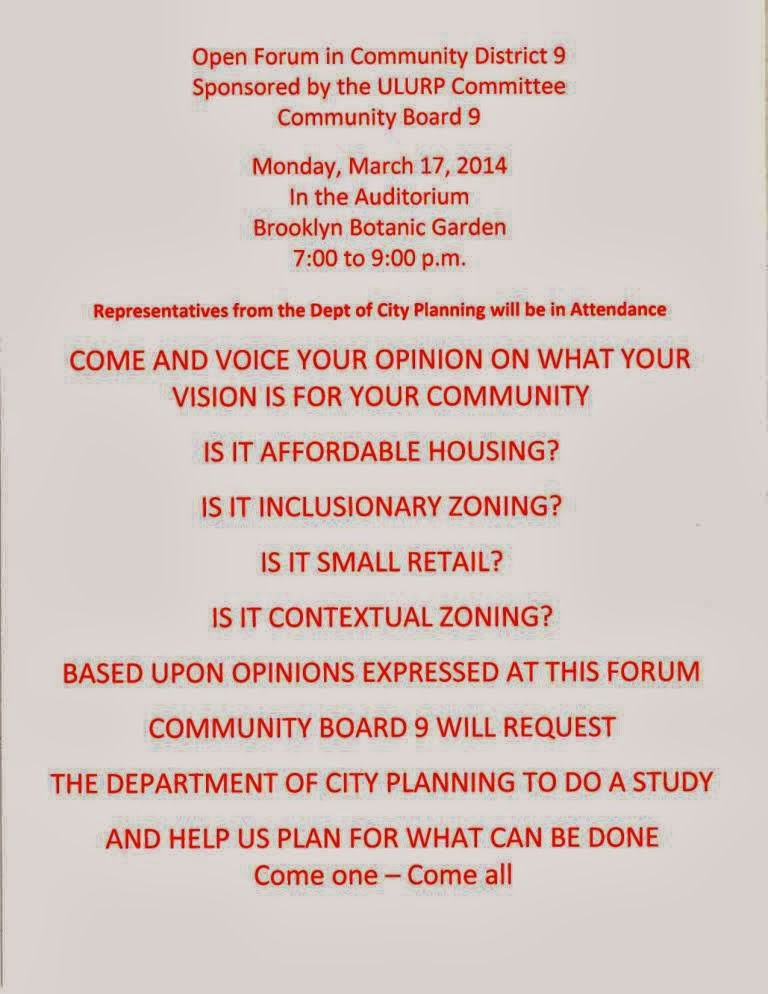 Even though I express myself forcefully sometimes, I don't want to tell you what to think, truly I've been trying to take the pulse of the neighborhood myself. But I do hope you WILL think. Because in five years you'll barely recognize this neighborhood, and it will be too late to have our itty bitty say along the way.

See you tomorrow night!
Posted by Clarkson FlatBed at 2:33 PM

Thanks for the heads up! I'm there. Will you also be posting details about Thursday's meeting with Eric Adams?

The Thursday meeting has been postponed, since two land use meetings in a week is probably too many for most folks. But it will be a town hall dedicated specifically to the issues confronting Flatbush an Ocean.