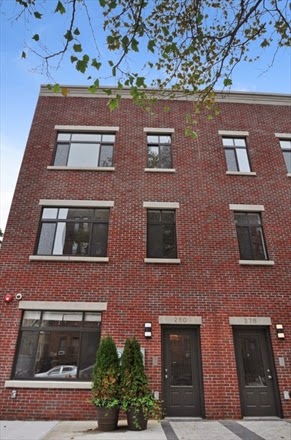 Those Feddersy buildings that went up on Hawthorne, near Nostrand, for more than $1.5 million? The Q wrote about them less than a month ago.

They're all in contract. That's right. Sold.

They couldn't sell those Fedders townhouses on Parkside at Bedford for $550K just five years ago. Now this? If this doesn't embolden developers to tear down every wood-frame house in the nabe, my name ain't Clarkson FlatBed.

When will the madness end? For those who think "zoning" is the battle for the soul of the neighborhood, I give you Exhibit A-Z. We have entered the Twilight Zone, and from here, there is no map. Not even on the Google.

I don't know the actual facts, ma'am. But all over Brooklyn foreign investors are buying up townhomes. Why? Simple. It's considered an excellent place to park money, as it's hard to find decent returns in other markets (well, other than insane stock markets like ours). So, buy a bunch of houses in a hot market like Brooklyn, then rent them out at the sky high rents that people are getting. You'll pay the crazy low property taxes in a couple months, and the rest is pure cash flow. Use that to buy more stuff. If you paid cash, then you can get out at anytime by selling, hopefully at a significant profit. See where this is going?

If a scare happens...and there are many scenarios that qualify...everyone tries to get out at once. The rest, as they say, is history. Or rather, historical.

Then again, it's always possible that there is a seemingly endless supply of families able to pay upwards of $2 million dollars for a home, and are willing to live in less-that-snazzy neighborhoods. My considerable gut says otherwise.
Posted by Clarkson FlatBed at 12:30 PM

these are the ones that have been fascinating us: 491 Rutland Road and 531 Rutland Road--both new(ish) townhomes, going for $1.5MILLION and $999k respectively: http://streeteasy.com/building/491-rutland-road-brooklyn/house and http://www.corcoran.com/nyc/Listings/Display/3383052 The latter is an honest-to-god FEDDERS building, while the former looks more like the Hawthorne houses...except it's no where in PLG like they're insisting (it's between Brooklyn and Kingston, firmly Wingate!)

Granted, none of these are in contract yet, but I'm sure the sellers are hopeful. and probably a little too over-eager.

I'll bet you dollars to doughnuts (as my grandmother would say) that these were not bought by foreign buyers but by people from Brooklyn or Manhattan. These are semi-acceptably designed houses in a mostly-acceptable neighborhood in a climate of record-low mortgage rates and inventory levels AND with rental income. Also, we don't know the contract price, which of course can be below or above ask. As for foreigners buying up stuff in Brooklyn, in my experience, apart from the occasional condo sale (and usually to house said foreigner buyer's child during his/her college studies and to be sold afterwards) it's nearly exclusively Dixon, an Australian firm, and they've concentrated their efforts on properties in need of renovation in Bed-Stuy. Otherwise, all the LLCs I see buying houses, especially those needing work and for suspiciously low prices, seem to be traced to Williamsburg, Borough Park, or Queens (like the developers of these houses).

If you are not an architectural purist and naive enough to think that new construction means it won't break on you, these are not all that ridiculous options in the market. 100 year old row houses and frame houses have drawbacks -- shitty heat, narrow rooms, lack of W.C.s. For the same money you get to avoid all of these, plus a parking space and a rental. I don't see a foreign conspiracy, just a cynical triumph over taste.

Actually radiators are better than this newfangled baseboard stuff, as is pre-war construction. The problems are plumbing, electricity, and lack of closets, but all are correctable. Otherwise you can't go wrong with original solid plaster walls and triple-thick brick construction.

LenoX, StreetEasy says 491 and 531 Rutland are both Wingate, regardless of what the crazy listing agent says. But you know what PT Barnum said, and what could be truer than in real estate? So sad. Why do people go into this without their own agent?

Babs: Will you help me with some math? If I'm buying a house for $1.5 million, how much income do you think I need to have? Tax, insurance, all in.

How much do you have down? That's the biggie. To get a regular 30 year fixed bank mortgage you'll need at least 20%, but that's only $300K, and that's some of these peoples' bonus money, so no biggie! So your mortgage is $1.2 million, which at 4.25% is about $7,500. including homeowner's insurance per month. So you're paying that plus water and sewer and real estate taxes, but offsetting that with rental income, depreciation expense, rental expenses (like paying for an ad in the newspaper for your vacant apartment, or even paying a brokers fee so you can have a "no fee" apartment rental) and interest payment exemption. Plus you own your own home in, as I said, a mostly-acceptable neighborhood. You couldn't rent for less! Go for it!

In short, your income before bonus should be at least $200,000 but that's easy if you're both working, and you'll need at least six months' worth of mortgage and expenses in the bank after your downpayment, but that's not so hard either these days.

Not so hard if you're part of the ruling class (a/k/a the 1%) taking over NYC these days I should say.

And actually Snob I see the triumph of desperation over taste - I have buyers who've gone for these type of things because they needed a place to live and they wanted to stay in Brooklyn (for some reason).

If we're getting all honest-to-god about it, the one on Rutland is a FRIEDRICH, not actually a Fedders.