As reported here a few weeks ago, Burger Mexicano is ready for its closeup: 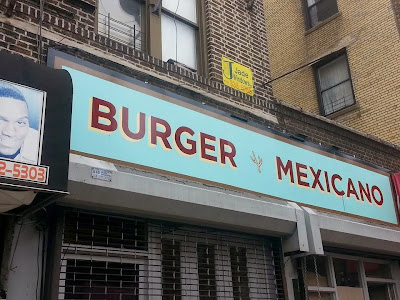 That's the old Meytex space on Flatbush. 545 to be exact.

Yes, it's true, we're getting TWO count them wine stores on Flatbush, one at the current Garden Deli across from Planet Fitness. The other will most likely take a space near Playkids.

And yes, LPT is becoming Mexican as well.

And now I hear a Japanese joint is opening on Rogers at the old funeral parlor, c/o neighborhood info-source Barbara Rogers, whose ancestors must have been friends with the Lefferts' given how up on things she is! (Though they were likely perpendicular friends, the Rogers' and the Lefferts', if the streets are any indication.)

Let the complaining before the place even opens begin!!

Wine store near Playkids? YAYAYAYAY. Hope its not another one of those super bullet proof ones, just want to buy my wine like a normal person...

The act of buying wine (or just about anything, for that matter) from a merchant who sits behind bulletproof glass is an everyday occurrence for some people and is therefore, normal. I didn't say it perfect or always aesthetically pleasing, but hey. That said, a lot of people will be glad to have options and someplace different in the neighborhood. Situations may not always be ideal but people do their best to get along. We should be sensitive and respectful of that.

If anyone needs good wine, it is parents.

I have have actually suggested to the Maison Charles dry cleaner guy that the massive wall of bullet proof glass might be a little excessive at this point and maybe he could take it down. He laughed.

In reality, Rogers was some long-ago owner of my ex-husband's ancestor, who, as the custom went, took his name. None of us ever knew any of them. I've got no Lefferts (that I know of) in my family tree, but do have Vanderveers, Remsens, Polhemuses, Schenks, et. al., some of whom repose down at the corner of Church and Flatbush. Guess that makes me an OG (original gentrifier).

Where on Rogers exactly will a sushi joint open up? That would be awesome. Sushi Tatsu II which is the only game in town is not that great...

So...you took your black ex-husband's name, Rogers and kept it. Your knowledge of his family tree is limited. Got it. Makes sense.

Your maiden name is what? And you're a Daughter of the American Revolution? New England? Virginia?

Regarding torpedoing a place before it even opens, you should find a link to that comments thread where people were preemptively nostalgic for the nasty old Papa & Sons, and were predicting that Wholesome would die a quick death because it wasn't a Whole Foods or Trader Joes. Should be good for a laugh.

I for one look forward to burgers and mexican food, and hope that some friendly intra-hood competition will make each place step up their game.

Nothing about needing to have community establishments be bulletproof should be mentally incorporated as normal. It might be the usual in some places, but that doesn't mean that it is a normal thing. We cannot accept the high probability of robbery of gunpoint as something normal to accept and respect. Regular people living respectable lives deserve better than that.

Earlier today I had the most pleasant experience I've ever had buying liquor through a bullet proof plexiglass wall, at the liquor shop on Flatbush just north of Parkside. I like them, and hope that incoming wine shops don't hurt their business.

Also, is the wine shop near Planet Fitness confirmed? I think the one by Play Kids is not yet a done deal.

Talk about an interrogation! He knew nothing about his father's family's background either, having never met the man. And yes, I am DAR (eligible although not signed up yet - it's a long process, and they've finally just finished gathering all the documentation for my first "patriot ancestor"), but not through my father's side, so my maiden name is irrelevant. I had several ancestors in the Revolution, mostly from Virginia. Enough?

The ironic thing is that my mother always refused to sign up for the DAR because they wouldn't let Marion Anderson perform a concert at their hall (in 1939!) and she was forced to perform at the Lincoln Memorial instead. Of course, they made up for that later. http://www.dar.org/national-society/marian-anderson-and-dar

The Japanese place (not sure if it's sushi or not) is going at the corner of Rogers and Sterling, where the House of Hill funeral parlor used to be.

Okay, I get it. I don't want anyone to know my maiden name either.

No, you're off the hook for now. The rest of the intimate details of your life should be easy enough to find on the internet, or down at my local supermarket - the NSA on Bedford.

Let's put it this way Rebecca. The one up near Empire is pretty near sealed, or rather corked. The other is yet an informed rumor. But what's the good of a blog if you can't print rumors? I like the guy opening the one down here, so perhaps this will deter any competitors. Other than the other two wine stores of course.

As long as all the wine stores maintain distinct personalities, I can't imagine anybody being squeezed out. Wine today isn't merely a choice between Gallo and Paul Masson as it was in my day, or rather among my "type." Those two and Mad Dog 20-20. I was a snob though. Wouldn't drink Boone's Farms without holding my nose.

I've always felt like I was being watched when I shopped there. And considering that my local bulletproof liquor store, on Nostrand between Lefferts and Sterling, does most of its business in scratch-off lottery cards and airline bottles (which then litter the tree-pits up and down my street), I don't think they have anything to worry about from a fancy-pants wine store.

And considering the building with the Garden Deli recently changed hands, to an owner who lives in the neighborhood and knows people who've been wanting to open a wine store, it wouldn't surprise me if the deli's days were numbered.

I also heard the rumor of a Japanese restaurant coming to the former funeral home. I heard from a worker at the site that it would be a Mexican restaurant. In other news, I talked to a man outside the store under construction on the opposite corner (but same side of Rogers) and he said that he was opening a new branch of the Blue Sky Bakery. I live on Sterling between Rogers and Nostrand.

Please not another "Mexican" place! The building on the other side of Sterling is owned by one of the big bad landlords Tim wrote about recently - can't remember which one.

Speaking of new restaurants, when is that IHOP on Church Avenue (bet. Flatbush & Bedford) ever gonna open? I've been hearing about it for years. When I pass Church from the B41, I can see the building but there's no listing of a new restaurant when you check the IHOP website.

PS MAJOR props to Rong Ge, the oft-vilified owner of this space, for actually really caring about this neighborhood and supporting truly local businesses.

Dang, wrong thread - should be down there in the el Patron thingie (see how old I am - I just said/wrote "thingie"). Duh.

I still want a Trader Joe's though.

Re: bulletproof "glass" - Why not leave it up for now?

I prefer to cut out businesses ther have bullet proof anything because it shows their narrow mind in just not seeing what message this sends indirectly and directly. Likely they don't even live in the neighborhood if that is how they view their own neighborhood. So no I don't think they even live or care.