Saw Alicia et al at the forum for candidates to replace Karim Camara for the 43rd Assembly seat. She and her gaggle had the usual disrespectful antagonistic questments (my word for questions really meant to be comments, of which there were a few), but dang if Diana Richardson couldn't keep her in her place. Why weren't YOU in charge of the mic all year, DR? Anyhow, she's safely got my vote, and given that she was the only candidate to show up she's probably got all of Lefferts in her pocket as...wait a second, is that Shirley Patterson? As I live and breathe it's an hour late but there she is! Recap: Instead of a forum, it was a bit more like a job interview - each candidate separately. I suggest that the Director of Human Resources, Rachel Holliday Smith, go with the vibrant candidate with the tiger-shark attitude. Folks, DR ain't taking no prisoners. And she's hilarious and whipsmart. But back to my point...

I could go off on how the below flyer is perhaps one of the best examples of how NOT to do graphic design. But, and this is a big butt, there's absolutely no reason not to support such a meeting. Now that I've backed down from the fight, I don't really have much reason not to want to see people meeting and sharing stories about the Ottoman, Roman, and British Empires, as well as (undoubtedly) the Quing Dynasty, the San Antonio Spurs and the Umayyad Caliphate, among many other Empires to be studied by the aptly named Empire Study group. Though I'm not sure Tom Angotti has any expertise in history. No matter; a good bottle of Muscatel and the gift of gab never hurt no one, no matter the topic.

Perhaps my favorite bit on the sign is the list of "Invited Honary Guests," which, since for the moment I'm still technically on CB9, includes me, though I am not nor have I ever been "Honary." At least not in public. Other honary guests include longtime bosom buddies of Ms. Boyd's Eric Adams, Councilman Eugene Mathieu (sic), Councilwoman Laurie Cumbo, and you might as well throw in Fritz the Cat and Huck Finn because there's not a chance in hell that any of them will show. 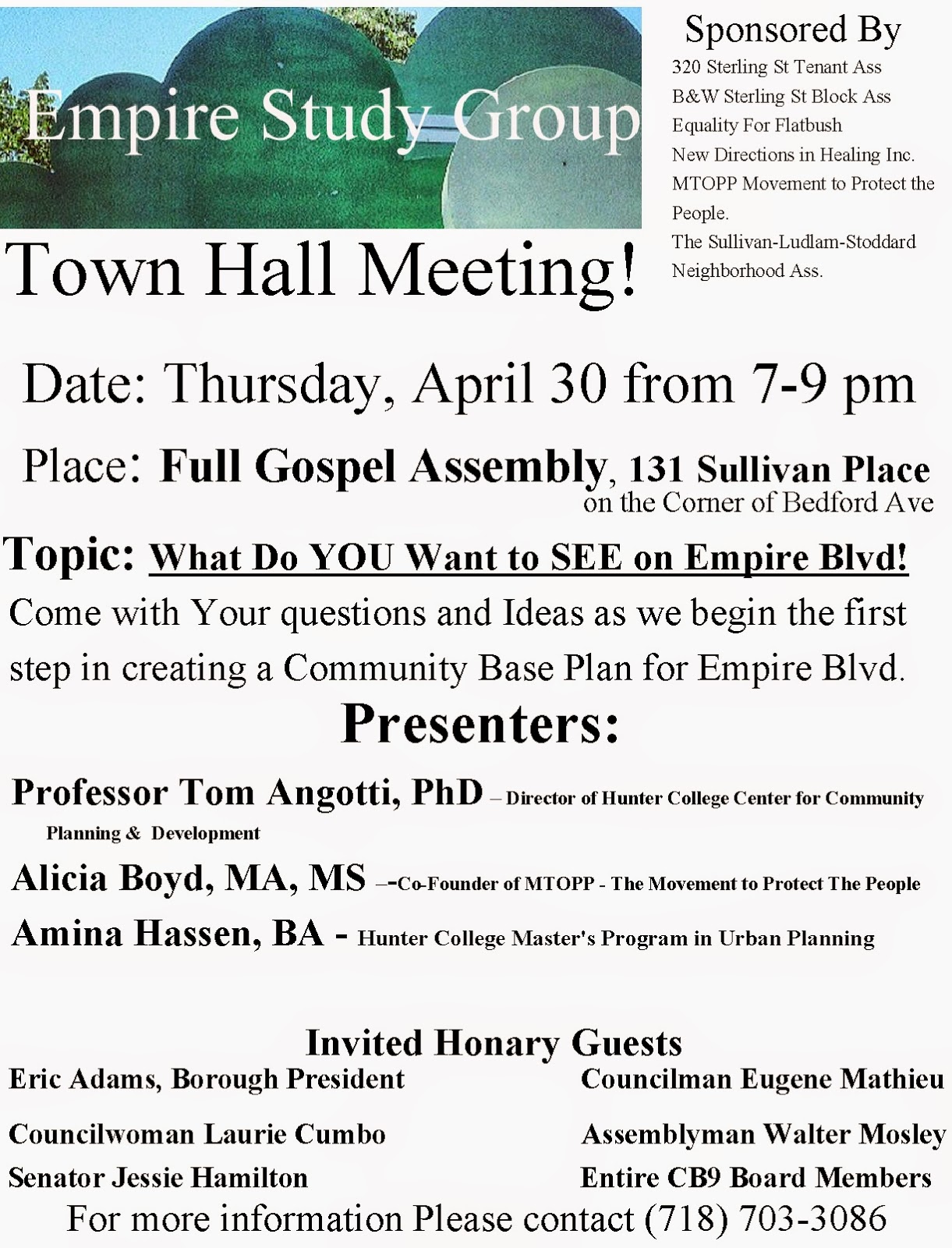 I jest, but what the heck this is a fine project and I hope they make great progress. I'll probably pop in with a fresh batch of my famous lemon drop cookies. Tootles!