The date of this post was April 1. To foreigners or to the just curious like a cat, I send you a link that shares the origins of the bizarre day of pranks that traces its roots back to Chaucer the Saucer (as he was known to his fraternity brothers for his habit of downing shots from a...well, you know...followed by a beer chaser drunk from a delicate demitasse imported from Istanbul, which is how he claimed his other name Turkey Jerky). 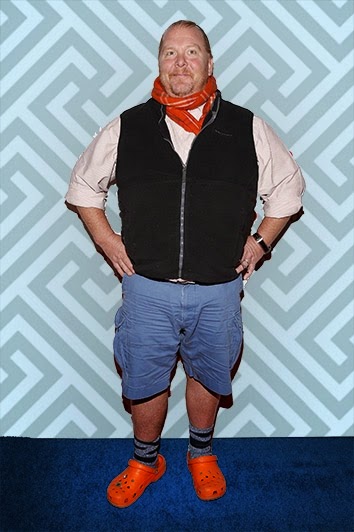 The Q's been keeping this one under his hat for the last couple weeks thinking surely it would fall through. The GEM Discount Store on Flatbush between Parkside and Woodruff is about to go from 99 cent bottles of perfume to 99 dollar bottles of hand pressed ultra virgin olive oil. Mario Batali, the corpulent serial entrepreneur, is about to open five (5!) Eataly Outposts in Brooklyn, one each in the trendiest nabes of Williamsburg, Bushwick, Carrol Gardens, Gowanus and, you guessed it, Lefferts Gardens. We're first up because, well, it was cheapest and easiest to move in on the lease at 724 Flatbush, right next to the Duanegreens.

So what is it exactly, this Eataly Outpost?
Apparently Batali has seen the enormous potential in franchising his super-successful Manhattan shrine to all things Italian and Culinary (from Italy and Culin respectively), but according to his press release
he has investors lined up to open one of these small groceries a month for the next two years in major U.S. cities. And we get the very first one! That undoubtedly means a Batali sighting on the Flabenue is not far behind, and Batali's behind is not too far behind that.
Much like recent neighborhood favorites like Larder and Provisions and Union Market, one can expect high-end specialty items and fresh to-go foods. And what tastes better than a tiny $30 pizza? Not much says Q, unless it's a $5 bottle of flavored seltzer. Batali's counting on the trend to smaller boutique shoppes to continue, and he certainly has the name to beat when it comes to drawing in the ravenously frothy gourmet crowds. Remember folks, food is the new rock 'n' roll.

Benvenuto, Mario!! Check out Pepa's while you're hanging drywall!

Woooooowwwww is all I can say! I'm super excited!

Omg!!! You got me lololol good one tim!

Happy April Fool's Day! But that Amazon thing is way scarier. Best of as they say. xoxo

I heckled him once at Barclays Arena. He's a ham, but damn does he make good food.

Gem was great, but we still have Phat Albert which is just as good if not better.

Tim is this an April Fool prank?

I'm excited to see how this works out. I love Eataly's pizza. Don't love the price of anything else. Also that area is not in the Lefferts Garden area. That's just plain old Flatbush. Close enough though.

OMG YOU TOTALLY GOT ME!
Was doing jumping jacks of joy. Now I am sad. Happy april fools.

DAMN! Not fair. I was slightly horrified, and now relieved. Well played sir!

Seems like it will serve significantly different demographics than GEM.

If this is an April Fool's joke, every yuppie in PLG will be so disappointed!!

okay. y'all suffered long enough. yes it's true. the GEM IS closing.

It's not just the yuppies who are disappointed! Would that this could be true. I am very sad now that I've been taken in AGAIN by an April Fool's joke.

So I was super excited. Then I was mad because it was a joke. And now I'm confused because if GEM is closing, what is opening up?

You bastard!! I just emailed my entire extended family that Batali was coming to Flatbush. You got me good.

But we are really getting a second (!) new taco place where Enduro was: Taqueria El Patron!

I used to love all the discount stores so much but they've gone downhill in the last few years! We used to get much better stuff there. Phat Albert especially is terrible now, just crap and it's priced pretty high, the clothing and the toys at Christmas. It's not a bargain in any way. The low income community would be much better served with a Target there to get their clothes and their kids clothes and supplies.