From Five Brothers 99 cent store, to Bubble Land. And in between, we saw the ancient sign under the banner that showed this was once a corner drug store. Probably from the '50s I'd say. Remember when that note hung on Five Brothers saying "went home to deal with death in the family?" Home was apparently Yemen, a country ravaged by war. The lives being led by the people all around us are so intense and varied. Never ceases to amaze. This is the promise of the experiment called NYC. 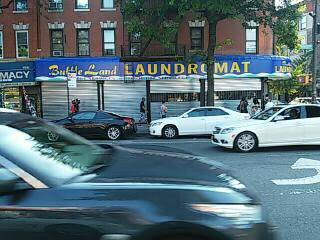 Posted by Clarkson FlatBed at 2:26 PM