Well alright! Coming into the end of the school year, and dang are my arms tired.

Tonight the Board formalizes whom will lead and in what capacity. Yours truly is running for treasurer, but I've been a polarizing figure and don't expect to win. Would be nice to be part of the agenda-making body, but also happy to continue as a committee chair. What a wild ride. I'm beginning to think we'll be turning the corner. And yes, you know who plans to come out and cause trouble. God bless the 1st Amendment.

The agenda for tonight's meeting at the School for the Deaf up near the Brooklyn Museum is here. If controversy is your thing, tonight there will be a crowd opposing the granting of a liquor license to a new bar at Union and Franklin. Despite the fact that we met with the owners and determined they are highly qualified to run such a place and have no history of criminality or disorderly conduct, some in the community will assert that they are a bad influence on rising rents. child safety and gentrification. And while the landlord of the building is clearly on a mission to remake the corner, in my view the business itself is hardly liable. Trying to control the economic activity of the neighborhood is not the way to keep people in their homes, legally speaking. There simply aren't the same regulations against running a business of your choice as there are for harassing tenants.

With bars, I get it. People are concerned about kids and drunkenness. But the bar is legally far enough away from schools and churches. And frankly, it's liquor stores that concern me more in terms of public safety. Though, truth be told, it's NYC, and I don't worry about THAT too much. The cops should to a better job of keeping public drunkenness off the streets, if only for safety and the belligerence of some alcoholics. Hey, we ALL know how that goes now, don't we? Been to a family reunion lately?

Then on Wednesday come out for the following crime forum. Should be a good conversation, hopefully with some potential solutions and action items. All are invited and encouraged to attend and share. 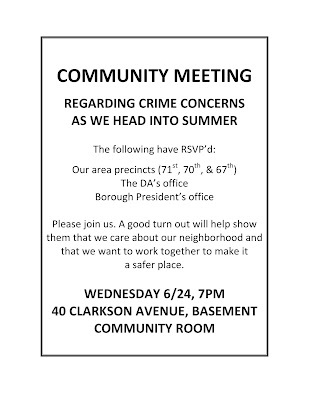 Posted by Clarkson FlatBed at 9:57 AM

Conversation about the new bar: http://www.brooklynian.com/discussion/45213/franklin-and-union-not-a-new-coffee-shop-maybe-a-bar#Item_58

Gawd, the NIMBY anti-bar crowd that shows up to community boards is particularly annoying. This isn't a dry county in the middle of the country-- we don't need to debate the merits of bars and alcohol every time someone is requesting of license.

Is there a way to get access to the minutes from tonight's meeting on crime? I am not able to make it, but am very interested in what was discussed. I have lived here for 4 years already, and have felt more or less safe, but after being mugged by a bunch of kids this weekend, I am scared to walk alone in my own neighborhood.