All the Latest From Your Councilman. And I Do Mean All.

When he's not fighting the good fight, staying abreast of local issues, taking on unscrupulous landlords and organizing constituents around major points of interest, your Councilman has other things to worry about. Apparently, a homeless man has threatened him, meaning that his master black belt in karate (true - he offers that detail on meeting) has been augmented with tax-payer paid security detail. Apparently, the scary homeless man who expressed verbally abusive behavior also knows the Councilman's black Mercedes by sight. Which is not really a surprise, since it has vanity plates announcing that it's his. More from The Daily News. 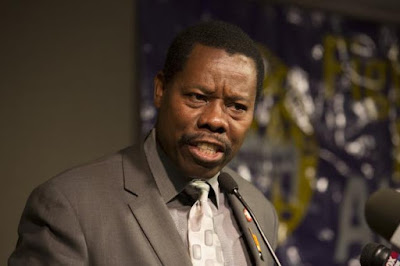 I guess when you're a bold champion of the people, sometimes you're gonna ruffle some feathers. Just a question: the security detail around "his home." That's the one out in Canarsie, correct?
Posted by Clarkson FlatBed at 11:03 AM

I said the same snarky things to my husband when I read about this. Spot on.

He's the most useless council rep this area has ever had. I cannot understand how people can be so dumb as to reelect him time after time.

A small percentage of people who live in this district vote. Those that do vote, vote for him. Tons of people come out for other elections but not for local council races.

Oh Shut Up! Get off this man and go stick your fat nosy ass somewhere else fat man. He's done a marvelous job. This district is booming economically because of his leadership.

To make matters worse. it's the local Democratic primary that seals the deal - no one votes except for members of a few mobilized religious communities.

Givemeabreak: Glad to see the Councilman and his clowns are still reading the Q!