And If All Else Fails...Thursday Night!

The Q's always been suspicious about Landmarking for some reason. Why that, he asks, but not this? Why yours, not mine? Some things seem obvious. The Taj Mahal shouldn't get torn down, or the Pyramids. Maybe best to hang onto the White House and Mt. Rushmore. I guess the whole 7 Wonders thing and World Heritage Sites are sort of the world's landmarking system. Some things just shouldn't be susceptible to the vagaries of the free market, I guess. Closer to home, the old Penn Station shouldn't have come down. So I hear. That was the demolition heard round the world, and set in motion the effort to preserve our cherished icons. Let's keep the Met, and the Empire State Building, as long as they're inhabitable anyway. The Brooklyn Bridge. Central Park. Greenwood Cemetery (actually, that's still not landmarked...but soon).

But when it comes to individual neighborhoods or buildings, privately owned and occupied, a lot of it comes down to the petitioners hard work and perseverance. And taste. It was never a lock that brownstone neighborhoods would stand the test of time and deserve their own historic status. They were, after all, houses like any others. And yet they became iconic. I'd argue that Sesame Street had a lot to do with it; plus the tantalizing veneer of sandstone and all the nifty shapes that could easily be carved into it. A lot of people don't know that these houses are made of brick. I didn't til I moved into one 13 years ago and saw some of the stuff falling off the walls. I assumed, not being a builder myself, that the whole house was made of the soft stuff. Except for the super high-end homes in the toniest neighborhoods, brownstones and limestones are brick row houses with what could arguably be called the vinyl siding of its day. Some people hated them, especially when they were grouped in tens and twenties. It's not that they're not nice - of course they are, that's why they're so damn costly. But in the case of brownstone neighborhoods, there is a certain Victorian allure that doesn't really gibe with reality. Read Osman's "The Invention of Brownstone Brooklyn" if you're on the fence. It's like we want to believe there was a gloried past devoid of greedy developers and displacement, when the middle class lived easily and comfortably in a rarefied world and passed each other to the tip of a hat and eloquent repartee. Phrases like "the Manor" or "the Heights" or "the Slope" suggest an air of flippant superiority, and it's all very well and good and cute and harmless. After all, we must have a roof over our heads and it might as well be a "historic" roof. Plus, some have grown mighty rich investing in these cookie-cutter houses.

But what makes a grouping of homes, or of blocks, historic enough and elegant enough to be "designated" a landmark? The Prospect-Lefferts Gardens Historic District is a terrific example of neighbors identifying the singular beauty of their neighborhood and petitioning the City for the right to remain "as is." You can't designate the whole City of course...there'd be no room for growth or renewal and frankly the City wouldn't be the City if it were a museum. But keeping parts of the City off-limits to the whims of commerce means you can walk through history even as you revel in its constant reinvention. It's modernity, but with a side of old comfort.

At this moment in our neighborhood's history one wonders what will become of the non-landmarked areas. My block, for one, is a Neo-Victorian Shitshow. How's yours? Recent landmark successes like "Chester Court" and the group of townhouses along Prospect Park called "Ocean on the Park" give a clue to what might win over the good folks at Landmarks Preservation Commission. Check out that link. Lots of cool places have been landmarked through the years, and the City should be grateful for the work of the individuals on the ground who get the process rolling and then persevere. Are you one of those sorts who's ready to roll up her sleeves and get busy? You'll need patience and great organizational talents to herd your neighbors into a common cause. Unless of course you're planning to landmark just one building, like say the little Pentecostal church on the north side of Clarkson I (that is, Clarkson btw Flatbush to Bedford). I have absolutely no idea what about it is landmark-able, but what's the harm in trying? I'm planning on submitting an application just for giggles.

As anyone within buckshot will tell you, the Q's been trying to get folks to rezone the neighborhood so we can protect the lowrise character of the inner blocks and focus new residential development on the avenues - Nostrand, Flatbush, Empire etc. Made tons of sense to me, rather than the herky-jerky stop-start tear-down attitude currently all the rage. The City was warm to the idea and willing to make concessions in order to build responsibly where possible. And look at infrastructure and schools and...but no matter. Cabia Doily (it's an awkward anagram) saw to it that no such conversation happened in time to preserve the inner blocks. Heck by now we could have limited height and demanded a certain amount of affordability towards the neighborhood's future. But sigh. What's left? Landmarking. And a prayer.

Come out Thursday night and hear all about it. If you have a dream to make sure your neighbors can't sell out to a tall skinny middle finger apartment building, here's the way it's done. 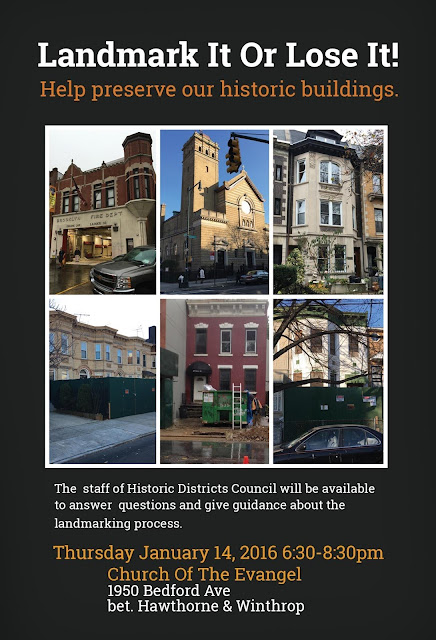 Posted by Clarkson FlatBed at 4:16 PM

Landmarks and Historic Districts will only help certain blocks where there is consensus on architectural significance. Thus, it is a much less fair system than an all encompassing plan for sensible zoning that would preserve heights on inner blocks for all.

Firstly, I post anonymous so my opinion does not get tied to my employer in any manner, but I am a junior architect that works in Manhattan.

Architectural opinion... Only the church, fire house, and clock tower above Phat Albert have much of a chance to have any sort of significance. Even then, they are a long shot. The clock tower needs a restoration badly and sacred space with a church and steeple does not mean significant. At work we are in the progress of tearing a church down (they are getting new space in the mixed use building, which made it palatable to do), but the community tried to landmark it and the reviewer dismissed it within a week of it being raised and after only five minutes of seeing the building. There are a MASSIVE number of all kinds of churches and brown stones around the city, which hurts the significance drastically.

I have only been in the neighborhood for roughly a year, but rezoning is the only way to go... I don't understand the protection of empire from development. From a planning aspect that street is atrocious and a ghost town any time you walk along it. Not like having good development would really impact the cars either (see fulton, eastern parkway, atlantic, etc...) but it would greatly help the community. The street width also has the higher chances for larger developments that would contain exceptions like parks/community space to gain height.

anon 1:56: thx be to god for your reasonable analysis...i thought i was going mad and was living in an alternate universe where up is down and pepsi is coke. if you could clone yourself 20 times and come to the next CB9 meeting that would be much appreciated.

I just found out a developer is planning a nine (9!) story building at 235 Hawthorne, on my block (http://on.nyc.gov/1TT7cs9). According to that link it seems as if the zoning is currently disapproved, but who knows how this will shake out. Talk about middle-finger development, this 99-foot monstrosity would be at least three stories taller than the other apartment blocks on the block, but situated right between a few two-three story houses. Who needs a neighborhood zoning plan, right?

I helped with the landmarking of the Ocean on the Park HD a few years ago. The first response from the LPC was similar to your negative assessment. The second was a statement from the Exec. Director to the effect that it was a shame that small "remnants" like the 12 Ocean Ave. houses couldn't be protected. The third move was for the LPC to calendar the proposed historic district. You never know unless you try.

IMO overall re-zoning would provide the best protection for our neighborhood, but we see how well that's going. There are a number of blocks, or parts of blocks, that are appropriate for landmarking and one approach doesn't preclude the other.

R6 zoning district for 235 Hawthorne requires 8 parking spaces for the 16 units they are slated to build. The DOB plans do not say anything about parking... It could be a way to push back. Developers prefer not to fight with the neighbors before the project has begun.

Parking is the easiest thing to get an exemption from, especially because it's a relatively tight lot and the current house does not provide it's required parking spaces so it isn't "increasing the degree of non-compliance". 16 units on that lot size would be relatively easy to construct completely legally and could be a nice, unobtrusive building.

I get stuck at work too late to ever get to any of them. Also, the few I have had to go to for projects I am working on are exhausting enough since as you can see, no one ever agrees even when it makes total sense. Had people fight over us tearing down an abandon building that was vacant for over three years... How does that do anything except improve everyone's life?

It's not clear to me why someone would construct a 9-story building on that lot. The filing is for just under 18,000 square feet of FAR. That means each floor will be less than 2,000 square feet (roughly the equivalent of a single floor of a row house) divided into 2 apartments. View of the park maybe? In any case the plans have not been approved - yet.

I'm gonna agree that Landmarking is not the magic answer and not appropriate for most buildings/neighborhoods. Landmarking has its place. I would love to see Parkside between Flatbush and Bedford Landmarked. Those rows of duplex Queen Annes are unique. At the same time (and I'm prepared to be unpopular here), I was surprised by the Landmarks designation of Chester Court. I am happy for the residents, but not so convinced that the homes are architecturally, culturally or historically significant. At least not on the outside (I know some of them are lovely inside, but the insides are not Landmarked!).