Why do we say "Happy New Year" anyway? It's as if it's a demand, or we've already decided. "Have a Happy New Year" sounds optimistic, but not overly assured. There's still a pretty good chance you'll have a shitty new year, but let's hope for the best, shall we? Anyhow, Happy New Year. I mean, why the hell not.

Setting aside the much ballyhooed controversies around residential development of the neighborhood, it's instructive to see just how much has happened on the commercial corridors. Both Rogers and Nostrand showed tremendous signs of vitality, with everything from pastries to coffee to wine to Mexican and pie and juice. But Flatbush Avenue is still main street to the Q, so I walked Empire down to Clarkson to take in some of the changes. Seen in one viewing it's quite remarkable how many options have popped up, with many exciting ventures on the way. The big question remains; how many of the long-running shops will be able to afford the high-price short-term leases being offered these days by the  new landlords, or by old landlords who've woken to the new reality. After all, they ain't running charities. They're trying to make or save a buck like everyone else, and I do mean EVERYone else, not just the greedy landlords, I say after one-clicking on Amazon Prime and checking the thermostat and cranking up the boiler, then plugging in the HP Laptop and drinking seltzer from my Soda Stream wearing clothes that NEW cost nearly nothing. You probably get where I'm going with that, so I'll switch to the pics.

Phat Albert owner Albert Srour turned over the reins to son Jack. Brooklyn Commons, Planet Fitness and maybe a chance for the anchor business? On the other side of the abandoned Car Wash, you can now get growlers, do hot yoga, go to boot camp and co-work without leaving the building, and in whatever order you choose. Showers not included.


I fear for the stores in the below building, the one next to 626 Flatbush. The building just changed hands for gazillions of dollars, meaning the new landlord needs to start producing big numbers. Scoops & Nykkis would be devastating losses. Not feeling hopeful for (at least one of the) pharmacies and the Botanica neither. 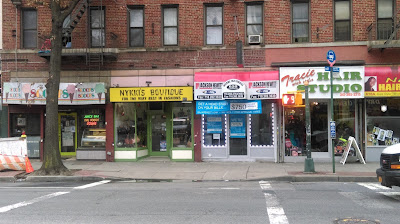 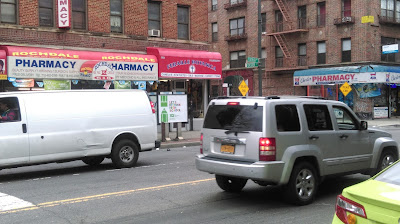 Always exciting stretch, this one. Plus Joyce David is there in case you need to fight that felony. 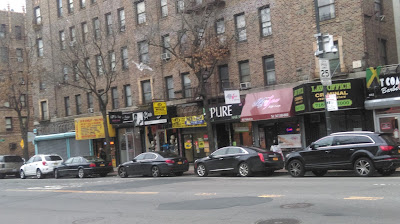 Of course I forgot to click the now one-year-old soon-to-expand cocktail place, Erv's. Tugboat's been there foreEVER (two years) so they don't count as new. Oh and Kalushkat! What a brilliant felafel! fallafel! falafal! Whatevs, it's delish. And while we're at it, it's quite likely we'll see new stuff in the commercial chunk of this building as well. 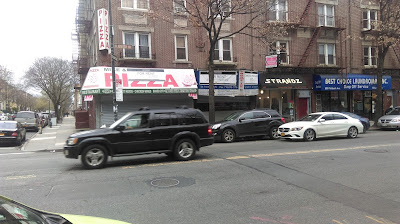 And remember neither of the two new big residential buildings have opened yet - on Lincoln and 626 Flatbush. Which, as I'm sure you know, will be home to both Greenlight Bookstore and the Maple Street School's expansion, and more to come. Is the Tafari Cafe going to open to the public? The awesome pop-up shop this past month shows just what a terrific space Sandra's created. Let's hope so.

Ask around. This is by far the most changeover and new economic activity since, I dunno, probably the Korean War. Economies are delicate things, so who knows what the future holds? See you next year, same time, same URL.
Posted by Clarkson FlatBed at 10:41 PM

What's going on at D Avenue? Somebody renovating?

Its going to be a bar called the westbury inn. There is a flyer on the window with links/social pages to follow the renovations and launch. D Avenue was a terribly run bar. Happy to see it change hands.

Is it really a new owner? Or is Richard just hoping the 4th time's a charm, after Lime, Rhythm Splash and D Avenue?

What about the hooka lounge?It's been closed for more than a week and they removed all the furnitures...

The little "murder" incident kinda put a dent in their business. Gone for good, amid accusations and lawsuits.