Let's Put a Lie To That One Right Now

If someone tells you that Empire Boulevard, or Lefferts Gardens, is the densest part of Brooklyn, does your BS alarm go off? Mine too. It's plain to me that if you want dense, you'd be hard pressed to find a better sardine packing than over in Caledonia and along Ocean Ave south of the Park. And in fact, that's what the map shows: 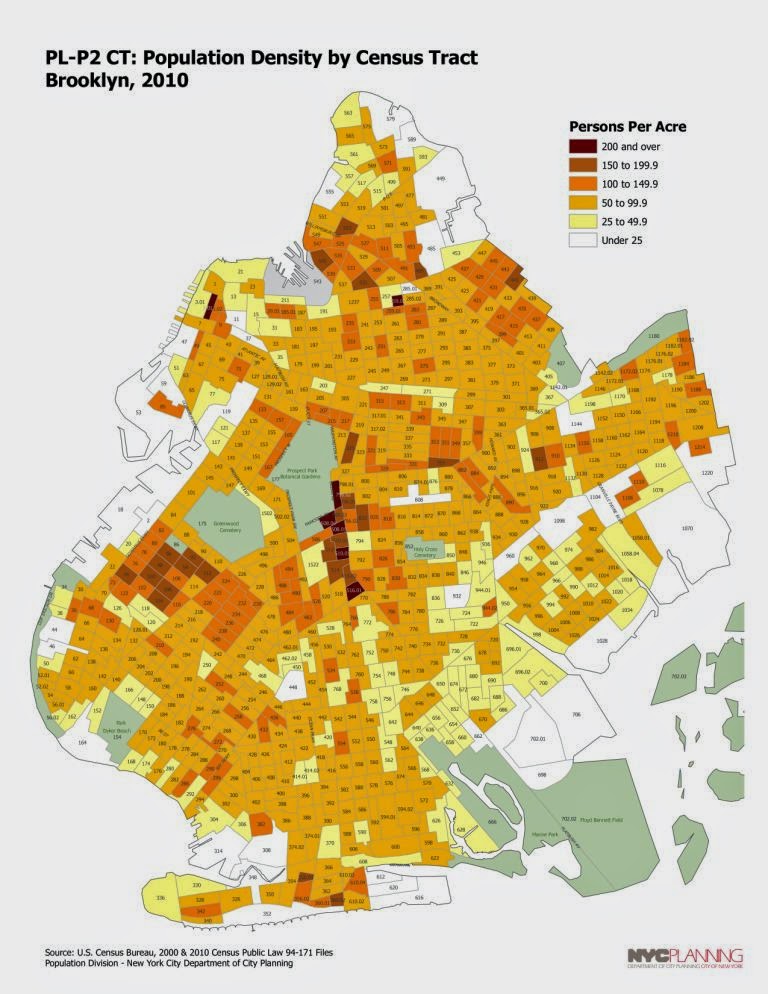 The census tract of Caledonia, my goofy term for the area boxed by Ocean, Caton, Parade Ground and the Park, has over 6,000 people in it. That's quite remarkable actually, given that none of the buildings top six stories, and it's like 16 short blocks in all. You'll see from the map that density does, in most cases, follow the train lines. Ocean Ave roughly tracks the B and Q, and gets its share of passengers along Prospect Park and down past me (Clarkson/Woodruff) and then heading down south, all the way to dense areas in Brighton Beach. While Ebbets Field and Tivoli Towers may seem high - and they are - they're on fairly large tracts of land and surrounded by low-rise. Remember this map next time you hear that this or that is the densest part of Brooklyn. The numbers are the numbers, and unless you're calling all of Central Brooklyn a neighborhood, you gotta imagine that increased density will, or should, be carried equally along public transportation routes. And Central Brooklyn, for better or worse, has lots of trains.
Posted by Clarkson FlatBed at 12:37 PM

So you could say that *most* of PLG is not super dense, excepting it's far west portion.

Yep. However, is PLG the same thing as Lefferts Gardens? Inquiring minds...

I would say that Ocean, being primarily six story apartment buildings (on just one side of the street I might add - if the map had taken into account the western side of the street your density would have been considerably less - the bureau cuts you a break by putting that into different tract, making you appear denser than you are!) is about as dense as Brooklyn ought to be period. Whether you go taller and leave some daylight is a question for zoning. But I have no problem with density of that magnitude as long as it's not everywhere. You gots to have some respite, don't you thinks?

By the by, I've said elsewhere that the 71st precinct claims to be the densest precinct. But that's a totally different chunk of real estate than PLG, or Lefferts Gardens, or whatever we call it. It goes out to Utica and up to Eastern Parkway. And unlike other precincts, we don't have much vacant space or even park space. We do have, however, a nice big chunk of green nearby!