Man, oh man, oh man. You've got to be on your toes these days. Even if your toes are deep in flower beds.

The stealthy crew behind the beautiful Maple Street Community Garden, tween Rogers and Nostrand, received an unwelcome visitor yesterday...the Makhani brothers, Michael and Joseph. The two have been accused of all sorts of wrongdoing through their career, mostly involving unsuspecting buyers and sellers of real estate. Hey, it's a tricky business, and if you have the upper hand, you can extract some serious dough if you're in the know. How about the fact that one of their companies is named HPD, inc.? Can you believe the huevos on these guys, to name their company in a way designed to deceive?

So yesterday, the brothers claimed they owned the property and reportedly said "You'll leave when the backhoes get here." Nice manners! Today they came back with a truck, and started tearing apart the garden beds. The Maple Street Gardeners called the cops, who came and asked to see proof that the Makhanis owned the land.  They produced a photocopy of some paperwork, which the police said was not sufficient. The group, on the other hand, produced endorsements from Councilmember Eugene and Borough Prez Eric Adams.

After much huffing and puffing, the Makhanis pulled their truck out of our garden, empty.  As one cop said, "This will have to be settled in court."

Know a good property lawyer that's willing to work pro bono? Email Cameron of the
At the most, the Q figures these shysters bought the property at auction. At worst, they're lying stinking thieves deadset on turning a quick profit on the vacant lot. A little notice would have been nice. Maybe a smile?
Just look at these characters: 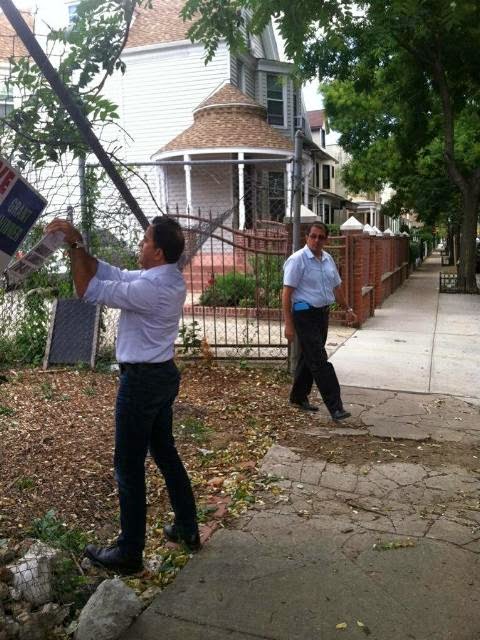 When men come out to do yardwork with their shirts tucked, you best know they mean business.

Posted by Clarkson FlatBed at 4:39 PM

It appears the property was acquired in early 2003 by the Makhanis' LLC via an estate sale. Around the same time period they were forging signatures and basically stealing deeds from legitimate homeowners and reselling the properties.


Starting point: find the Kirton family member who sold the property and verify the sale. Here's the recorded deed...

Per a deed recorded by the City in 2011, 237 Maple St. forms part of the same parcel with the house next door and was purchased by HUD, Inc. in April 2011, sold by Brooklyn LLC, for a nominal amount, meaning no significant cash was exchanged and no real estate transfer taxes were paid.

And why not? Because Kamran Makhani was a principal of Brooklyn LLC and Joseph Makhani was principal for the buyer, meaning it just went from one pocket to the other.

And Brooklyn LLC bought the whole thing for $1 (apart from any envelopes that changed hands under the table) in 2003 from a legitimate owner.

Looks like everything the current owners have done is legal, if on the shady side. Can't imagine why those guys didn't come equipped with printouts of all of this, which is readily available in public records, but that was their mistake.

In the interim I'd say you guys had better find yourself a very good lawyer, because you're clearly on someone else's property, even if they chose to ignore it up until now.

And unfortunately many bereaved and unsophisticated sellers fall for these people who come knocking on their doors like undertakers following the death of a loved one, when they aren't thinking straight - they promise a quick sale, and no estate or capital gains taxes, and a big envelope (around $150K) under the table - sounds like a quick answer to a number of problems, doesn't it? So what if what these people have done is illegal if they get caught, that's not likely to happen - all the seller has to do is say, "Yes, I agreed to it," while he's counting his money on some beach somewhere.

You could be right about a few things but this property was not purchased in 2003 from a legitimate owner. Given the history of these two I'm 100% sure of that after looking at the documents. Who was the heir? How did the probate go? Any records of that? This property looks like it would have went to the state but somehow a "owner" appeared out of thin air to legally sell them a massive lot (originally 100x100) for a mere $5000 during the height of their other property schemes that they were imprisoned for. Benefit of the doubt? NOPE.

Unfortunately, there is benefit of the doubt, and as said, it will have to be decided in court. Considering the time that's passed, I'd expect this to be a lengthy (and expensive) process - hope they're successful in getting a pro-bono attorney, or they risk losing just due to lack of funds, which would be very sad.

A better idea than trying to litigate these guys would be to involve the DA's office. They have already been successfully prosecuted for filing illegal deed transfer documents. Same modus operandi as the other transactions (tax lien sale).

Unfortunately, the garden is still operating on private property and eventually it will probably be evicted. It might be tied up in probate for years though.

We were able to find a pro bono lawyer through NY Lawyers for the Public Interest. It involved a different kind of situation than at Parkside. But, they might be interested. Here's their website:
http://www.nylpi.org/

They are wonderful people, there.

Might I also add that it's not the garden's intent to take over and claim this property as theirs. Several attempts were made to contact this supposed owner.
Before this, the garden it was pretty much a dumping ground of garbage and filth the the owner didn't care about. Weeds six feet tall, car parts, endless bottles, appliances, trash were all over this place. Let's also not forget the sidewalk that's severely damaged that the owner never clears come snow time.

The neighbors got tired of the neglect and cleaned up the place because we live here, not him. It's clear he doesn't care. When he showed up he attempted to confiscate all the tools and equipment in the garden as well as break down the garden beds. That's extremely inconsiderate. We have the right to get our stuff at the very least.