Brooklyn's Tallest Building - Come On Who the Fuck Lives In These Things? 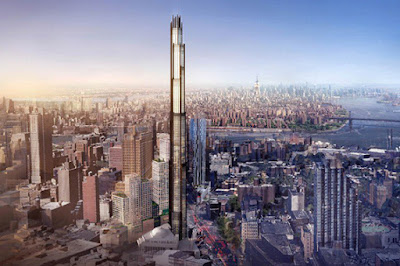 A lot of folks are up in arms about plans to build a 90-story residential tower in Downtown Brooklyn.  Look, this is what happens when you allow Downtown Brooklyn to become the next Midtown. The zoning allows for just about any size, and now that rents have hit a threshold, it's actually possible to make money in Brooklyn building one of these things. Folks, this is not an inexpenisve building. It's skinny, but it's tall and it ain't cheap. Near where Junior's ever-was. Craaaaazy, man, crazy.

But the real question isn't whether this belongs. In Delirious Brooklyn, anything apparently goes. The real question is...who the FUCK wants to live up on the, say, 80th floor anyway? I don't know anyone who would choose this lifestyle. I mean, maybe for a weekend it'd be kinda cool. But seriously that kind of view is meant for a $20 ticket, you go up, say "whoa," look for your actual apartment way down there, make a statement about how the people look like bugs, and then head back down and get a bagel and smear. You don't live there. It's absurd. For a view? You gotta go up and down 80 stories everytime you want to get a pint of ice cream? Sure maybe you have it delivered, because you're too lazy, or more likely because it's ABSOLUTELY RIDICULOUS to go down 80 stories, even in an elevator, just for a Chubby Hubby or a cold Fanta.

We hear that very few people are living in these vanity towers. The units are purchased by shell companies, by people who may or may never set foot in them. That Marlboro 100 in Midtown comes to mind, and the Time Warner. Shit, somebody should put a stop to this right now. There's a housing crisis, man. Build for people who are actually going to live there, and enjoy it, and become part of the community. Yes, Empire, I'm talking to you. I think Peabody in Peabody and Sherman lives in one of these. But that's a talking genius dog, not an actual person.

And if you meet someone who would put down a few million to live at the top of this rather than live near terra firma in a proper house for the same dough, please tell them to come see me so I can beat some sense into them. What's next? Buildings that go a mile into the earth so you get a better view of the magma? Save on heating.
Posted by Clarkson FlatBed at 10:51 PM

Russian oligarchs and other members of the international uber-elite who treat NYC apartments as a nice way to park and launder cash.

Found this about a week ago and showed it around my office (an architecture firm in Chelsea), universally we hope it doesn't happen. Go figure it's done by SHoP, the same firm that brought us the needle tower on 57th street in Manhattan. This also means don't hold your breath on having any truly affordable housing in it, but likely a 100 million dollar penthouse just like that has.

What you're referencing is spot on, it's so painfully out of scale with what people love about Brooklyn. People love having the tighter knit community and local spots that Brooklyn's relative sprawl allows. Not that you can't build up, but that you have to do so responsibly. The highest buildings should probably cap at 40-ish like they currently do in that area. You can even see them in the rendering and they almost fit in, but due to zoning a tower like that never will. They are by nature a one-off because you use up so many properties' air rights.

To clarify, I am pro-development (by nature of my job I almost have to be...) but that doesn't mean all development is good development. Let's hope they get brought back down to earth as this goes forward...

C'mon Tim, you're thinking small! We still have a long way to go until we get to Frank Lloyd Wright's 1956 design for a MILE HIGH SKYSCRAPER: https://en.wikipedia.org/wiki/The_Illinois

I'd live up on the 80th floor of this downtown building, as long as a) they install a pneumatic tube to shunt Junior's cheescakes up to me and b)I could park my dirigible outside the window so I can easily commute to my office job in Lando Calrissian's Cloud City.

The head of the City's design commission should just nix this thing on aesthetics alone. The Mayor should agree. Look, Brooklyn like all major Cities is finally getting its Downtown. Hardly revolutionary. What's sort of shocking is that so much of the height is residential. In my opinion the Downtown Brooklyn boom is exactly the part of the market that's gonna get crushed in a downturn. People will be looking elsewhere. 10-12 stories as a max along transit hubs (like 4th Avenue) starts to look pretty damn reasonable.

As of Right development is not contingent upon other's views of the development's aesthetics.

As of today, yes. But you forget who controls the ultimate authority in this town. If the Mayor and Council agreed to change the rules, they could do it tomorrow. The simplest version would be: you can't go taller than a surrounding taller without a design review, to protect the citizens interest and the skyline's integrity. How hard would that be? Not at all. And it would sail through ULURP. BUT...the Mayor would have to make it a priority. Will he?

The City's skyline belongs to the City. If people demanded it, the City would have to capitulate. But it'll take awhile and some changes of heart. I think we're on that path though.

And Paul, I suggest we go for the Cloud City concept. Isn't Staten Island the perfect spot? People gotta wake up to the fact that the people gotta go SOMEwhere. But these albatross bullshit stick buildings don't house people...they house trophies. It's a flagrant foul in the game of life. I officially blow my referee's whistle.

I pass construction sites for these new mid-town billionaire space needles every day. It's an amazing sight to watch a tower crane life a concrete bucket 1000 feet into the air. I can certainly appreciate how some folks love anything to do with super tall buildings - they're admittedly exciting feats.

It's just too bad that a) most of them are hideous designs and b) are for hideous people.

I think if most of these things were office buildings people would feel very differently. Personally, I would not object to Empire State Building part II in downtown Brooklyn. I do object to valuable real estate going to stupid condos for billionaires.

The Chrysler Building, the Woolworth Building and Empire State Building were once that out of scale. What is the point of having a downtown in a City if you can't reach for the sky. It would be nice if it had some office space in addition to the residential.

I agree with Paul that the tube to Junior's is a must but I would live there even without the dirigible.

These parcels of land have been zoned for high rise buildings for quite sometime, and that has always been an inherent part of their value.

The owners of the parcels are now exercising the development rights that have always been attached to them.

...one does not lose the ability to exert their rights simply because they have not previously exercised them.

Thanks for putting into (4-letter) words exactly how I feel about these, and this. Soulless, horrible, arrogant. Makes me so grateful for our ramshackle house. These are trophy buys for people without the faintest notion of home or community...isolated sky-palaces. Or just "investments."

I have a hard time believing that people have souls. Therefore, it does not bother me when buildings do not.

I second the comment about office towers. I'd work there. Would be great to not have to commute all the way up Manhattan. (I realize that I could already be working in BK if only my office would relocate, but my broader point is just that its good to have more offices closer to home). Plus, I bet the view is super sweet. If this will really only be super huge condos (are we sure about that?), I agree that its a pity to have all this square footage without actually adding many more units. Only more units will help make things more affordable for everyone else. I guess the silver lining is that if it's really just oligarchs living in these things it won't contribute much to excess crowding.

I get the annoyance with the change of aesthetics. But, isn't it better than the alternative of endless sprawl? I think the trend of having people move to cities is ultimately a good one, even if in the shot term it has some really terrible effects (like causing the affordability crisis). And if you have lots more people moving to the city, you just have to build more units. They gotta go somewhere. And maybe superpacking downtown is better than making EVERYWHERE way more dense. Having a skyline is cool.

Listen folks, it's a tall skinny for two reasons: 1) the site is extremely small: It sits in-between beloved Junior's and the historic Dime Savings Bank. No building can get that tall in DB without being a tiny site and; 2) they purchased air rights from the historic Dime Savings Bank: the very specific intent is to save historic resources.
The City cannot protect small architectural or cultural buildings (Dime and Junior's) and then shriek when that occurs.

My husband would be so happy to commute to downtown Brooklyn not downtown Manhattan. Yeah! Why isn't this borough trying to attract companies, offices, jobs? I don't see a demand for a 90 story residential building there either. Everyone who works in the courts and government building clears out at night so is it even nice at night? It's barely tolerable during the daytime. I am a skeptic about these development announcements. They show the design and then look for investors, who are not always found. Like the development on Nostrand for the 23 story building. They actually still need investors. Just because the architect has finished the initial rendering doesn't mean it's being built. The tall building on Lincoln Rd. didn't get canceled because of protestors, it was because they couldn't get the money after which the next developer had trouble getting money for a while, to finish it. It would be great with every one of these announcements if somebody who knows all about such things would weigh in and give the real status report.