Moses Fried. Haven't though of him in a hot minute. If you're new to the story, he's the slumlord who owns 205 Parkside, the never-finished squatter haven at the corner Parkside and Parksie Court. It's unbelievable that it has sat "uninhabited" for more than a decade. At least its facade was fixed up a few years ago. The Q's written at least a dozen times about 205, but not in awhile. He fixed it up, but now it just sits, a miserable reminder that while there's a housing shortage, some people could give a rat's ass. He and grandson David Tepper clearly have little idea how much money they COULD be making.

The Q walked down Classon, past another of Ol Man Moses' notoriously neglected love shacks, the quasi-bordello he was running called "Lefferts Hotel" in Bed-Stuy. Here's what the condemned building looks like then and now: 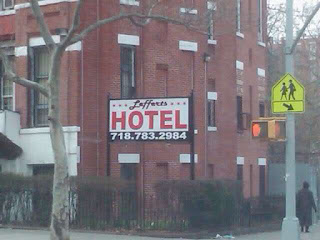 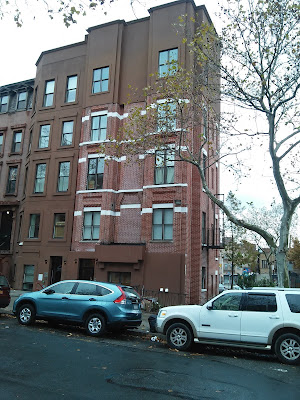 People have moved in here. It's gone from hourly no-tell motel to (probably) super expensive rentals. Maybe we'll finally get some sort of action from 205. As anyone can see who walks by at night, there's still squatters living there. So strange at this point in time, but hey, there's a bunch of squatters on my street to. Ever since some houses foreclosed or were bought, folks just moved right in. Don't know if they're paying rent to someone. One woman clearly thought I was too nosy asking. I didn't want her to get kicked out, but something about my look told her not to trust me. No offense taken.

There's a desperation and an anger that if you're new there's no way you could fully appreciate. And yet, for those of us safe in our mortgages and those with reasonable or decent landlords, it's kinda the same as it ever was. All this talk of strife, when most people continue to go on with their lives, with rent often being low on the list of worries. One woman told me she's glad to be out of 85 Clarkson. Couldn't stand the "element" living next door to her. She'd been there 25 years! How long had she lived next to this element? 20! 20 years next to a jerk. Now she's moving to Marine Park. An old Jamaican lady, moving to Bensonhurst? Better believe it. A big spike in the number of Caribbean folks living down there, if the numbers are to be believed.

A sign of the Apocalypse? Hardly. But meaningful just the same. Yet the carnage continues, in buildings where the landlords have green on the mind and hate in their hearts. It was the best of times, the worst of times. A Dickens of a pickle if you ask me.


Posted by Clarkson FlatBed at 4:22 PM