The other night at the CB9 meeting I realized a couple things. New things. One, I had no idea that the pro-car sentiment was so strong that it would try to kill a common sense fix to two of the most dangerous intersections in the neighborhood. Two, that one of the ways to "stick it" to people like me is to tell them how "we're going to shove your project in your face." In other words, forget about the public good. This is about personal retribution for some people. Which made me wonder whether I just need to stop being so public about my feelings.

First off, this is not MY project that I invited to present at the meeting. This is a DOT initiative funded with Federal dollars that were placed into the budget years ago by then Congressman Major Owens. To put it in perspective - this project was but dream years ago, when one could only imagine a day when you could fix messed up intersections that needed a full redesign. The money became available, good people have been working on it for months, and now a few bike-hating zealots want to shut it down? I don't think so. Not if you can help it. I'll probably need to duck out the back door and let you convince your CB9 board member neighbors that saving lives and creating green public spaces is being civic-minded and forward-thinking.

The only big problem with the way DOT has tried to sell the project is that while it's called the Empire Boulevard Reconstruction Project, it really involves just two multi-angle intersections that are more than a mile apart. You probably know Franklin/Empire/Washington really well, if you're reading this here blog. It's a hot mess, all times of the day. The other intersection is also beyond ridiculous, in construction and right-of-ways and dead spaces, but it's a lot harder for me to gauge the need because I don't see it very often. Go check it out though - Empire at Utica and East New York, Remsen and then Schenectady. Dreadful. Bizarre. But I'll leave it to someone else to make the case in detail. I like what DOT is proposing there, but it's not the part of the project that I'm willing to draw blood (my own!) for.

Exhibit A below shows OUR problem location. If you have a small child, you know precisely how dangerous is this intersection. Cars come from all angles, jostling for position to make the beginnings or ends of light cycles. The tiny chunk of Franklin that veers off to the right as you head up Washington only adds to the sense of, shall we say, adventure. Often a bicyclist or pedestrian becomes stranded somewhere. If you're not paying attention, you can get injured or killed. In fact hundreds of accidents have taken place at this and the other project intersection in the last five years, with 29 people maimed or killed. 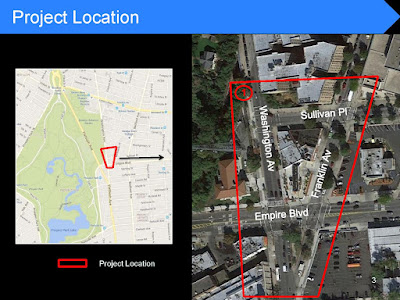 So DOT, after months of analysis and data crunching, has offered a solution, and has the money to pay for it. You need only look at the traffic flow to see how crazy it all is: 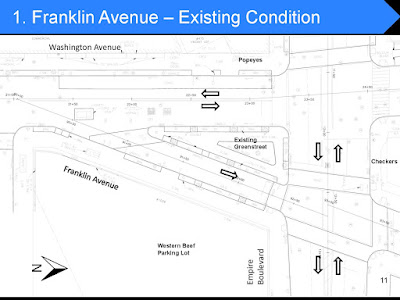 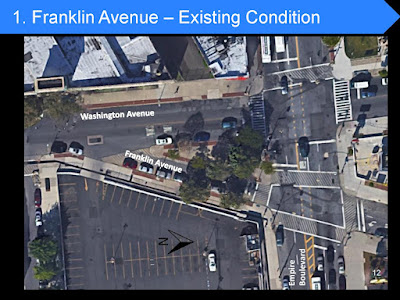 The proposed design will not hinder drivers in the slightest. Yes, you won't be able to sneak up the tube at Franklin, but that's one of the major confusion factors. DOT wants to send you up to Empire on Washington to turn right. Like just about every other intersection in the Western world. Western BEEF notwithstanding. 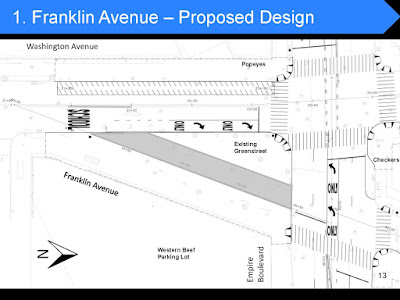 Best part of closing that bit of Franklin is that it gives you some space to put trees and benches. Add some neckdowns - you've seen them on Flatbush past Grand Army Plaza, between Park Slope and Prospect Heights. For elderly and children in particularly, these shorter intersections are a godsend. AND you don't have lengthen the traffic signals to provide safety. Cars move, people move, (okay here it comes) bicycles move. Everybody moves. No one gets hurt. As much. Hurray! 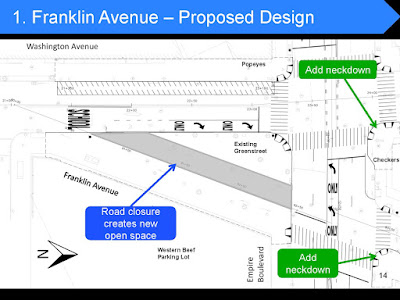 Let me share my favorite complaint, after DOT presented the landscaping, seen below. And it's not the first time I've heard it. "What do you need trees for? You've got Prospect Park just a block away!" Look, if you hate trees so much, maybe I finally can understand the bizarre attachment to the Western Beef parking lot. Which is nearly never full!!! It's like I'm living in a world so topsy turvy that people wear pizza and eat shoes. And hate trees. Actually, I guess that part is already true. 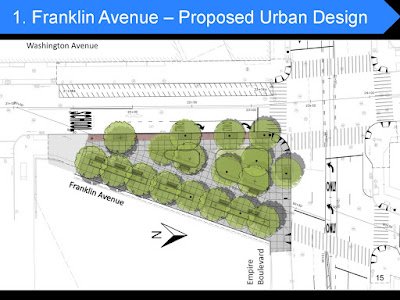 If you care about such things, I urge you to come to the next Board meeting and voice your support. Or start a petition. Or come to the Committee meeting where we'll resurrect this and revote. That's Wednesday, Nov 18 at the CB9 clubhouse, 890 Nostrand near Carroll. Questions just email me.

The DOT plan looks completely logical; promotes safety, improves traffic flow, adds trees, which I personally love, and increases pedestrian space so obviously there will be a lot of vehement opposition!

This looks great. I'll be there.

I am for the project...because it's logical; it makes sense. So what do you want us to do?

I believe one local comment I saw said "why do we need more trees when we are so close to a park!!"

Completely logical and will improve quality of life for all area residents. Keep fighting Q!

I don't know, Tim. These trees have been trying to get zoning along Empire Blvd. for a long time. If we let a couple of trees on Franklin, we might see them all over Empire. And you know, trees grow. They'll tell you it's a 10' tree, but next thing you know, it's a 20', 30' tree, and then you're stuck with them. What I want to know is, why do the trees get priority here? There's a lot more Dunkin' Donuts garbage on Empire than trees. Shouldn't that Cookie Dough Coolatta cup get a say in what gets planted on Franklin Avenue? Why are the trees turning against there neighbors?

Which meeting is more important to have a showing at - the transportation committee on Nov 18 or the full board meeting on Nov 24?

Waaaaait a minute - this has to be a joke. One of the people who forced the proposal back to committee owns a driving school?