Down South They're Getting Serious About Affordability

Ah, the Caton Market. Once an outdoor flea, it became an indoor mini-mall with stalls. But it's never been very inviting. And while a few small businesses have indeed gotten their start there, most suffer from lack of foot traffic. People just don't go in. Time for phase III? 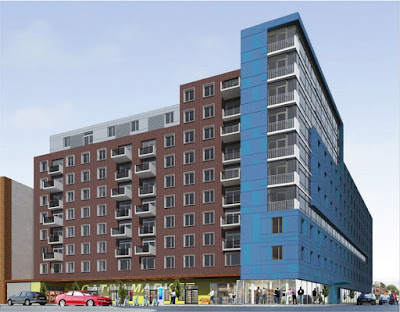 And guess what? This guy wants to cobble together the financing to make the ENTIRE building means-tested, at various levels. With the current anti-housing fever in CB9, we can only be glad it's happening in the district to the SW, namely CB14. One would hope the project will make its way through ULURP without too much trouble. And who's the guy leading the charge? A hometown kid done good, Meredith Marshall. Read all about the project in the Brooklyn Eagle.

Question: What if we put political pressure on the case to do more of this, say along (gulp) Empire Boulevard? We'd finally find out how committed certain neighbors are to affordable housing, since this kind of project is for everyone BUT the luxury market. What do you think? Would MTOPP and Concerned Citizens go for it? Granted, it's not City land. But with the right politicians on board, and a community sufficiently dedicated to building low and moderate income housing...
Posted by Clarkson FlatBed at 4:44 PM

You lucked onto the right tactic Timmy Boy! Don't settle for anything less than all affordable on Empire! Who could say no to that?

Because Empire is not city owned land, developers are not going to be able to built a complex that is affordable to people earning below $50k without significant subsidies.

Mike: Of course it would take tons of subsidies. The deeper the affordability, the thicker the subsidies. That goes without saying.

They built a bridge from Brooklyn to Staten Island. They thought it was crazy. It cost trillions in today's dollars. The hundreds of thousands of public housing apartments? Even more.

Are you out of your mind, sir? Have you seen the crime-ridden dump that was built on the footprint of Ebets Field? Lining Empire with similar structures would be a great way to destroy PLG. Dense, low income house has been fairly difinitively demonstrated to be a failed experiment.

Enough of us would have to want it and believe that it is in our collective best interests.

We seemed capable of that in the past re: bridges and public housing, but I don't see it presently.

As long as it is not in proper PLG, I am sure it sounds great to folks...

I, too, worry about infrastructure a lot. Our schools need help. Our transit system needs help. More people means more everything - from sanitation pickups to grocery stores. We shall see.

How bout some parity in the district ?

Top Ten Answers Are on the Board,