Join Us and Play For Peace - Tomorrow

Looks like it might just be a beautiful autumn day tomorrow. After a rocky year in our humble but lovely neighborhood, it's time to come out and play. It was nearly a year ago that 350 of you signed a petition asking the 71st to put regular beat patrols on the Flabenue, you know the kinda cops that get to know the merchants and regulars and get to know the good guys and bad guys by name. With so much activity, and a recent uptick in violence and gangbanging (the other use of the word, I know I know it took me a while too), we felt convinced that the prior two years' violence was showing no signs of abating. Turns out, sadly, that our gut feelings were accurate. Then the shooting started. And kept coming. And coming and coming. I documented a bunch of the "events" and wrote up a press release around it, and many of you added more, including a stabbing here and a stabbing there.

Enough. We don't need to revisit all that. The Q's been over it all before, and we've met in twos and threes and fifties to talk it out. The cops of the 70th and 71st know all about it. I've shared inside info with everyone who'll listen at both precincts, with Brooklyn Patrol South and the rep in Kelly's office and many folks at the D.A.'s office and even a special investigator. We're even signing up another batch of folks for the Civilian Observation Patrol to ride around in our very own police car (email me if you'd like join in the fun).

But you know what? I think things are going to change for the better, I really do. And it's gonna start tomorrow night, when you and all your neighbors come out to the Parkside Playground for a little bit of healthy fun on a beautiful fall day. Play some basketball, swing on the swings (that have recently been replaced, thanks everyone for calling 311!) and just hang out. You don't have to be a kid - I for one would love to see people of all ages come out and hang. And by the way, we're not going to be talking on bullhorns about guns and gangs because the little ones don't really need to be thinking about all that stuff. The Playground is symbolic, because despite pleas for regular patrols and locking at night, the area continues to be a breeding ground for trouble, and recently a bizarre "fight club" ritual, documented in detail by nearby residents. But guess what? Even just organizing this event has drastically increased the police presence. They're out their every day, and locking up. And the councilman even showed up. And the kids are starting, just starting to take the hint. Let's nail it home tomorrow.

Let's Play for Peace, hang out, chew the fat, maybe bring a little picnic, do some exercises on the adult equipment, admire Kimberlee's great work on the landscaping, talk to Vinnie Martinos, and watch the cops lock up at the end of the evening. Can't wait to see you!

Here's the gorgeous poster made up by Karen Oh, and thanks to Pavani for all her hard work. Kumbaya anyone? 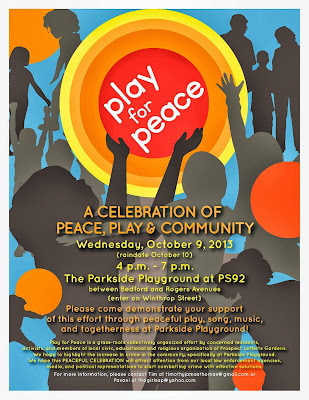 Posted by Clarkson FlatBed at 6:14 PM

Although we only got there for the end, it was nice to see Parkside Playground so well used. Kudos to the organizers! I'd love to see this happen again - regardless of whether the conditions prompting it subside (as they hopefully will).

I was not able to attend, but my husband went. He was very encouraged to see a large turn out. He spoke to many people in the block who were not aware that there's been many incidents in and around the park.

I'm so happy to have this park, it's great to see that other people care about it too. I stopped by but had my dog and out of respect don't bring her into the park when it's occupied (although she's a harmless little boston terrier), the turn out was great. Thanks for doing what you are doing. Also, if we each could just pick up one piece of trash a day in the neighborhood the impact would be more than noticeable.