PPA Knocks One Out Of Own Park 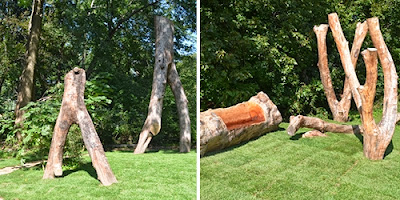 Dang this one's good. If you have kids, or you're entertaining having them, or you're entertaining them while they're in town, or you're pretending you're them, or you just like looking at repurposed hurricane-damaged timber, head on over to...to...that area of the park just south of the Vale of Cashmere. There you'll find the newly opened Donald and Barbara Zucker Natural Exploration Area. On the Q's third visit in a week, I can guaran-friggin-tee you that kids absolutely LOVE the unstructured aspect of the place. They're free to roam and use their imaginations, and the worlds biggest sandbox (this side of a beach) is perfect for little diggers and builders. I'm not quite sure why it works so well, except to say the five-year-old still scurrying around somewhere in my brain instantly loved it, balancing on stumps and stuff. It's somehow really refreshing, given that so many playgrounds feature the same basic forms and lawsuit-proof tableaux. 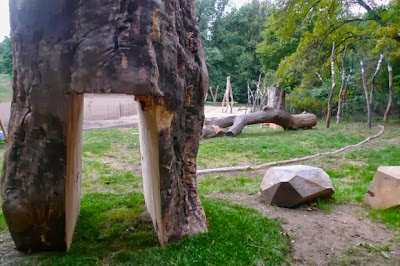 And now that we've come to the adults-only end of the post, let me warn you that the amazing Vale of Cashmere itself, with its ruins of fountains and gardens is not totally family friendly yet. It's still very much a Pickle Park, and the gentlemen whom you'll see wandering the wooded areas are not strictly nature lovers, though some are drawn to express their nature in a manner typically expressed privately. This would be perfectly harmless of course, except for the quite unnatural plastic refuse left behind after these natural expressions, and the fact that these performances often happen during daylight and can easily be happened upon quite by accident. There is also the small matter of the fact that the exchange of products or currency often coincides with these supposedly private performances, making these frequent occurrences often run afoul of local and state ordinances. So...watch where you step, and don't stare too closely unless you want an eyeful!

Posted by Clarkson FlatBed at 2:12 PM

Where is this exactly? I can't find it on the PP website map and nobody I ask seems to have any idea where it is.

you can search the prospect park website for it. its in an area of the park called Nellie's Lawn.

Due south of the Vale of Cashmere, east of the Long Meadow.

It is on the side of the park where the zoo is. If you walk on that side of the track you pass the zoo and then there is a trail that you can take, there is a bust of a bird (I think it's a bird) in the beginning of the trail. It is a little seedy over there, (no pun intended) as the Q has mentioned. You can also just continue on the track going towards Grand Army Plaza and you will pass a field on the left side where, people often play soccer. If you cross that field you can also find the play area.