A repost, lest anyone miss it:

As promised, the Q is here to tell you that months of bickering about the who, what, where, why and how around TALL buildings in Lefferts is leading to this: a community-voted assessment of how we'd like our neighborhood to grow. The only way to influence that meaningfully is to work with the City on zoning. And the only way to influence the Community Board's decision-making is to show up at Committee meetings on the issue. Let me be very clear: it is usually too late to wait til the day of the actual vote, which will happen on the fourth Tuesday of some month - an actual Board meeting. Committee meetings are where the details and wording of any proposal get worked out, and they are also open to the public, and are held at the CB9 office, and are generally small enough for your voice to be heard. The committee then recommends action to the full board. Many members of the Board will assume the committee has done its due diligence, and will likely vote with the committee's recommendation. Some, but not all of course. And some may even be swayed by public comment on the day of the vote. So if you can't make it, you should be sure to show up for a final vote and sign up to speak.

This Monday the 28th at 7PM, the ULURP (Universal Land Use Review Process) Committee will meet to discuss zoning changing to Lefferts and Dodgertown (a cute micro-nabe east of Kings County Hospital before Utica).

AND if you act now!! On the same agenda, we'll be discussing whether to let Phat Albert's open a gym. Apparently Mr. Albert Srour will need various permits that require approvals. I've heard many people say they're excited about the proposed Planet Fitness at that location.

Here's the agenda with the deets: 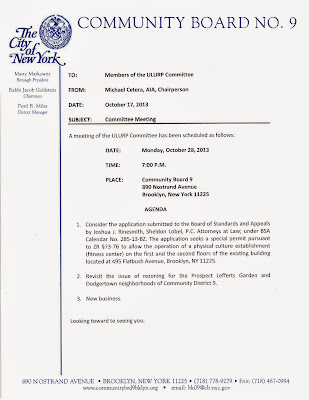 Posted by Clarkson FlatBed at 11:07 AM

A gym would be great. Not that I will use it (or any other form of exercise) but it seems like something the fit people in the nabe really want.