Been awhile since the Q mentioned the work being done up at the "Garden" part of the Prospect-Lefferts Garden(s) part of the name of our neighborhood. As you may recall, the BBG Board okayed the reconstruction of not only the cute little archway entrance at Flatbush and Empire but also the whole kids garden. Below I reprint my post from back in 2011 about the whole kit n kaboodle because I'm too lazy to retool it. But I will say to those concerned about where to enter the Garden, things aren't as bad as all that...

Just walk, ride, stroll or roll up Washington to the old main entrance at 1000 Washington, just across from Montgomery Place. It's not so very much farther, and not nearly so far as the new visitor center up near the Brooklyn Museum or the Eastern Parkway entrance. In fact, I find that some people don't even know about this "original" entrance at all.

Below please find the reprint of a two-year old blah-blah-blah:


First up on my radar, the Garden. Lots going on there. Like the massive new entrance on Washington with what looks like a garden on top of the new visitor's center, which will be quite nice I'm sure, but sheesh I'm beginning to think that BBG is more interested in its entrances than in the actual plants. I also attended an unveiling of the plan to redo the cafe. Basically it'll be in the same general footprint of the current cafe, but with a new "hut" and better "flow." The word "flow" is apparently used by actual architects, while the word "hut" is something I came up with to describe what I saw in the rendering, which was very pretty, but didn't include bringing back the Chunky Chicken Salad Sandwich, which was my favorite reason to eat at the garden for many, many, many moons. In fact, I've been chowing there regularly for 22 years since I worked at The Brooklyn Museum right outa college, and I must say the excellent catering company deserves a new "hut," and the shift in orientation will actually create a garden view while one dines al fresco.

They're also going to start working soon on OUR entrance, where they'll be adding a new outbuilding that looks like the below. 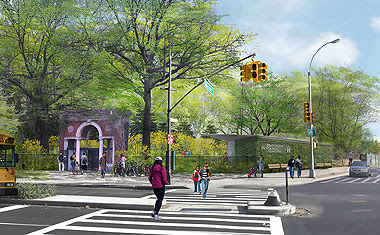 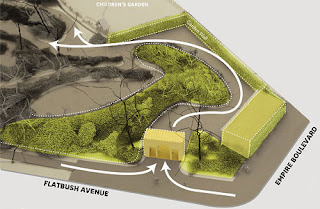 Looks like a souped up "shed" to me. There'll be bathrooms and a small visitor's center so you don't have to trek deep into the garden to take care of your "business," transactional or otherwise.

Posted by Clarkson FlatBed at 2:44 PM

That entrance at 1000 Washington Ave. has been for members only (you have to show your card). Will they be opening it to the general public during construction?

Good point Bob. I doubt they'll be taking money there. But I will say if you go to the Garden with any regularity you'd be a damn fool not to join. The dual/family membership is a particularly good deal.

I'll check to see about that though...in fact, if there's enough outcry here, I'll lobby at the Community Board, how's that?