The Q understands that the above headline is a major stretch in the pun department, but he's on a deadline at work.

The much-beloved often misunderstood diner at the corner of Rogers and Empire is now history, and Massey Knakal is peddling the site for development. One can only hope that, despite the commercial zoning, someone will put up some semi-affordable housing here, in the spirit of the Q's hopes for an Empire housing boom. We have nothing to fear but fear itself. And Taco Bell. 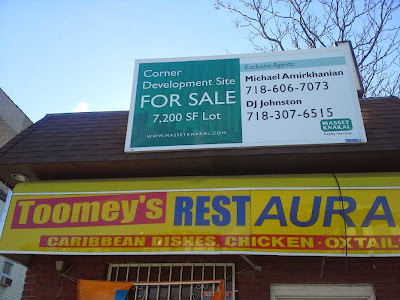 Posted by Clarkson FlatBed at 2:34 PM

Please not another strip mall or self-storage warehouse...

I know people need housing but gosh if it wouldn't be nice to get another (better) sit down restaurant in that spot. My neighbour is a chef and looked into starting a place in the space but he said they were asking a gargantuan amount for rent, I guess because they knew they were gonna knock it down.

Wow, and here I was thinking they were open all this time and I just had really bad timing! Interested in seeing what ends up being in the works for over there.

I, for one, welcome our new diner overlords.

The zoning allows retail and residential at that site, so it could be either (or both). The asking price is pretty high for the amount of residential you could build on that site though, and I don't see luxury housing selling there.. maybe I'm not very visionary. Fortunately you can't do storage or automotive uses (gas stations, auto repair etc) there - it's a different zoning designation than the part of Empire Blvd west of Rogers. Unfortunately they might be able to do a strip mall/fast food place though.

As pointed out in this blog, that whole area is loaded with dead or under used retail space, especially on the north side of Empire. Might take some time but this could get the wheels rolling. Considering population density of the area it could be a boom.

I hope it's not a mixed building like that place The Verve or The Valve or whatever up on Nostrand and Sullivan. That retail space continues to sit empty and it's all very annoying considering how much empty retail space there already is on Nostrand. Oh yeah, I remember, the place is called "The Plex" - http://www.theplexbrooklyn.com - Ugh

It's really just bizarre that the commercial space at the Plex is still empty - you'd think that something catering specifically to that building's population would be an obvious choice; they must be asking an astronomical rent.

I've encountered a few of the building's residents, and for the most part they have zero engagement with the neighborhood, do all of their shopping/dining/amusement elsewhere and get off the train at Sterling St (as instructed by building management - I once ran into two very frightened people who'd gotten off at President St because the train was skipping Sterling, and they had NO IDEA how to get home - after living there for six months), run home, and lock their door, to go out the next morning and do it all again in reverse. Pathetic.

Babs: Interesting that you should post about the Plex under the post about Toomey's. I'M thinking someone from the Plex needs to rebut your accusations of carpetbaggerism!

And yes, something nice could go in that commercial space, though if I hear one more person pine for a Trader Joe's...(actually it would fit there quite nicely without big reno costs. I was on the UWS the other day and people were actually queuing up OUTSIDE to get into the TJ's on Broadway. now THAT's the kind of dedication I thought was reserved only for Apple nuts)

I don't think they'd rebut that point at all. Here's how their website describes the building: "Need cash? Hit the in-building ATM. Looking for a late-night snack? Check out the vending machines. Need to feed the fridge? There's cold storage awaiting your grocery delivery. Want to play? Head to the WiFi Lounge with your laptop..."

Heaven forbid you should ever venture into your surrounding neighborhood for any of these things and, you know, maybe like interact with actual area residents.

In terms of the building's description of the neighborhood, it's stated to be "an easy walk to...shopping, restaurants, and the nightlife on Franklin Ave." because everything closer is just too scary!