The first person to say SoCro gets a shillelagh to the ol' noggin!

On the Q's  6 minute bike trip up to Community Board 9's office I often ride by the grounds of once-grand St. Ignatius Catholic Church on Rogers. Brownstoner points out that much of this open land will soon be apartments. I was just wondering the other day what a Church might do with land like that...so much grassy knoll. Well, I guess I have my answer.

Here's the pic and story from Brownstoner: 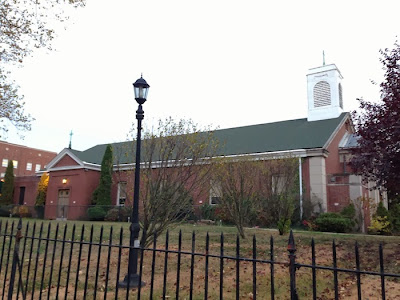 Some may seek comment from the forever opining Q, but there's not much to say really. Developers are looking for anything they can find, and this was ripe for the picking. Zoning must be put on the fast track. I'll keep you apprised, as this area is part of our Community District, and to my mind, it's very much part of our neighborhood.

People were calling those developers crazy for assuming that the neighborhood was "ready." Now they're looking prescient. I rented a Zipcar from there last summer, and while the whole nabe hasn't gone upscale, there were plenty of bourgies happily residing there. And how would a Zipcar renting guy like the Q know one when he sees one? Hmmm. That reminds me I need some Seventh Generation window cleaner for my mirrors.

Rogers, or SoRo, has always been a bit depressing, and Franklin, or SoFra downright rough. But with new businesses planned, or NeBuPla, the North Franklin boom will undoubtedly take hold south - it's all about the express IRT y'all, and heavy marketing by the powers that rent. The only thing that might stem the tide is the relative poverty of the Ebbets Houses, though proximity to low-income housing did little to stop booms in Boerum Hill and Red Hook and Clinton Hill.

How about this, Tim?

BeCroFa. Between Crown Heights and Flatbush.

I know Tim doesn't much like the name "Prospect Lefferts Gardens" and even I must admit it's quite a mouthful, but I think it's a whole lot better than "BeCroFa."

Lefferts Gardens is a much more suitable name for our hood. I say it all the time and prefer it the best. Leave the word "Prospect" to the Park and to Prospect Heights. It just becomes so confusing to people who do not know the neighborhood.

And Q, a one word name for the neighborhood is not ideal. Please name off how many one word neighborhoods are in Brooklyn? And also who the hell cares if there are not specifically gardens in everybody's front yards like Carroll Gardens. A lot of the front yards are set back at least 14 feet and have some beautiful landscaping, which is why Lincoln Road won Greenest Block. It did not go to any streets in Carroll Gardens. So I dare somebody say our front stoops are not luscious little gardens!!

For now on, we will be referred only as "Lefferts Gardens". Memos will be distributed to all the major brokerage firms.

Greenpoint. Williamsburg. Bushwick. Flatbush. Midwood. And, up in Queens, Rikers.

Also, unless you care to be extremely punctilious, DUMBO is one word. Also, the vastest Brooklyn neighborhood of them all is universally referred to by a single name, Bed-Stuy.

All of those one word neighborhoods have a connotation that I do not want "Lefferts Gardens" to be associated with; primarily hipsterdom and remoteness. Sorry but I really think two word neighborhood names has a better rhythm and falls off the tongue much nicer.

I would much rather be associated with the Cobble Hills, the Park Slopes, the Carroll Gardens, the Prospect Heights, the Fort Greenes, the Brooklyn Heights, the Bed Stuys, the Clinton Hills, the Red Hooks, the Boerum Hills, the Ditmas Parks, etc.

I recently set up a Facebook group called The Parkside Empire Flatbush Avenue Merchants Association to promote and support our local merchants.

I'm also hoping to beat out Flabenue with The Parkside Empire.

Joyce! That reminds me, I owe you a visit and a profile...

Look, I'll make you a deal. I LOVE The Parkside Empire, so simple, so genius. BUT...I won't start using it til you guys get your organization up and running, deal? Til then, it's Flabenue...

If you don't already know Shelley at Play Kids and Sandra at Tafari Tribe, I'm sending an email now to introduce you. I sense a Gang of Four coming on...who'll be next? Maybe one guy at least? Kola at Tugboat maybe? The Wholesome Foods folks...Dr. Cuts...Trixies...Associated...Scoops...