The Best Kind of Amnesia

Last weekend's big Flatbush cleanup warmed the Q's heart. Four years ago a bunch of neighbors did a Flatbush cleanup day too. It was a bunch of people I knew who organized it - Skei and Carmen and Babs and others. This time around I had no clue who got the ball rolling, though I'm glad they did. Though I did see this picture with longtime buddies Duane Joseph and Elizabeth C., and of course that was NOT a surprise at all: 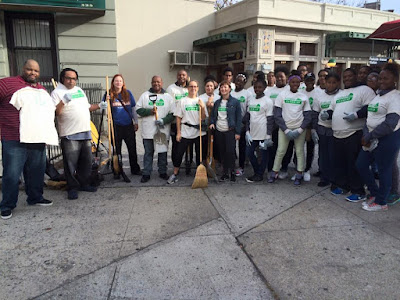 I guess hats should leave heads for Virginia Bechtold and Jo Ann Brown, two women I've never met but who have a big presence on the PLG Facebook group. At first when I read about their enthusiasm I felt a deep cynicism coming on, since we'd gone through the same thing twice, once three and once four years ago. But then I realized just how fantastic it was that new folks were tackling the same problems. Then I got melancholy. Where was my zeal for cleaning that I had four years ago? I was so gung-ho. I headed up CB9's Environmental Protection committee, getting neighborhood associations together to talk about lasting solutions. As I learned, it's tricky. We got the City to start writing more tickets, but not everyone who gets the ticket was responsible for the trash. (Myself included to the tune of $100) I sent around hundreds of Sanitation flyers to businesses, telling them their responsibilities. But if just a couple storefronts per block ignore the rules, they can help make the whole block a mess. Then we tried to get the smarter trash bins that are harder to "dump" in. Actually some of those ARE starting to come our way! And remember when Carmen tracked down that nasty guy who was dumping construction garbage right onto Rogers? Those were the days my friend...

What was hilarious was when Shelly of Play Kids and the Flatbush merchants association were talking and we both agreed Flatbush has been looking much better than it did even just four years ago. This made me think about how annoyed I'd get when I'd complain about a rash of crime and old-timers would say "yeah but it's WAY better than it used to be." Maybe I'm becoming that guy? Only about trash. Actually, I think crime is a bit less overwhelming too, but I wouldn't say it to a newcomer. Especially someone who's just been mugged. You want sympathy, not "you shoulda seen it back during the crack years."

When the First Annual PLG Cleanup Day happened on April 30, 2011 it was brilliant. So many people came out, and volunteers from Community Groups. Skei had T-Shirts made, the posters were gorgeous. And after all that work I went out on May 1 and wrote this post. Of course we all knew the Flabenue would all go right back to its miserably filthy self, but so soon? At least on this Sunday I did notice a cleaner neighborhood, a hint at what could be.

But the fact is, nothing's going to change big time til we get regular street service, with Doe Fund guys or other BID hires. We have one from Parkside on down (the Flatbush BID), and except for the early hours of the day, it looks pretty damn good for all the traffic we get. The main culprits are the dumping of household trash and the overfilling of bins that's usually the result of the dumping. There's littering, I won't deny it. I pick up a handful every morning on my third of a block towards Flatbush. But a piece here and there isn't the same as a whole basketsworth. That's the kind of thing that makes me feel like no one gives a damn, when of course the reality is that almost everyone gives a damn, but we're held hostage by the few who don't. Give a damn, that is. Give a "damn?" Strange phrase. "Damns for the poor!" "Won't you please give a damn to man without a damn?" "Give a man a damn, he'll care for day. TEACH a man to damn, he'll care for a lifetime."

Funny you post this as I sometimes think too that the garbage situation has much improved. We do still need our garbage cans back. The majority have not been returned since they were removed for misuse by the sanitation dept going on 4-ish years now.

My point exactly. It's easy to think you're the first, particularly in Brooklyn. Gentrification, even, goes back to the 1950's in earnest, primarily in Brooklyn Heights. Then Boerum and Cobble Hill and Carroll Gardens and Park Slope and Prospect Heights Williamsburg and Ft. Greene and now Bed-Stuy and Crown Heights and Bushwick and Flatbush and Sunset Park. And Windsor Terrace, which doesn't get a lot ink, since it's primarily wealthier whites displacing less affluent whites, though the home sale often turns the less affluent whites into more affluent whites. Class issues are very much in play, however.

I find the story of Windsor Terrace to be very evocative in these conversations, reminding us, I think, just how much this is about race above all else.