Flatbush Corridor Finally Gets a Fix

Since first skipping down Flatbush Ave from the Garden in 1989, and driving my Mazda GLC along its bumpy rue, I've been amazed that no DOT brainiac has seen a need to bother sluicing its plumbing and regulating its anarchy. Accidents and slowdowns and the near video game frenzy of dollar vans have been the norm for, I dunno, maybe back to the days of the Dutch, or at the very least to the golden age of the Dodgers and dodging from trolleys.

After last night's forum at Erasmus, we can finally expect the changes that the Q and many others have been advocating for years to be implemented. Check out this nifty visual aid printed in the Daily News article today: 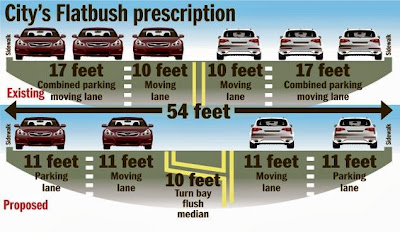 Finally an acknowledgment, as my own measuring by footsteps will attest, there is simply not room for three lanes each direction. Other cities like Seattle would never dream of such insanity. In my post from last year on the topic, I noted that the prescription on Parkside from the Tennis Bubble is working swimmingly. There's even room for a bike to ride by the parked cars, provided the rider be on his guard for the opening of doors.

Ever noticed how Olde Good Things parks its truck along Parkside near the Parade Ground? If you haven't read this post about the CoBU Cult on Woodruff, that's a fair enough segue don't you think? That's probably my favorite Q scoop, and alls I hads to do was Google the address. Amazing what turns up when the hours from 11pm to 12am are spent on the ol' Toshiba.

I wonder how "to Google" conjugates in French. Nous Googlons? Googlez Vous?


Posted by Clarkson FlatBed at 9:45 AM

This is fantastic news. What's the implementation schedule? This year?

Good news indeed, but incompetent drivers in this neighborhood are still legion, and I don't know what the solution is for that.

The other day I witnessed a driver on Flatbush, while she was sitting at a red light in the far right lane, drive through the red light, immediately turning left, doing a 3 point turn in the intersection. All this while the light changed to green and traffic started flowing in all directions clogging up the entire intersection.

How many times have I been overtaken on the left hand side as I am turning right at an intersection, waiting for pedestrians to pass, watching the car overtaking me take a hard right in front of me, almost killing a couple of pedestrians in the process?

How many times have I seen traffic not even pretend to slow down at a light that has been red for a good long time? Red lights are seen purely as recommendations in our zipcode.

Where do these people learn how to drive?

Jenny: I'm pretty sure they all learned to drive at the driving school/notary public/email printing/bill paying store on the SE corner of Flatbush at Parkside.

There is also a driving school on Clarkson that (I kid you not) lists "nervous drivers" as one of its specialties.

I actually think that some of these fixes will help to tone down the general state of lawlessness. It would also help if pedestrians stopped crossing like pigeons to crumbs. It's a group effort, this safety thing. The most obvious fix is ticket writing cameras. That's a state job, and the Upstaters don't like the idea very much. Write your State Senator or Assembly person. They're the ones who could make it happen.

ASAP. A super friendly guy named Greg at DOT delivered his presentation twice now. He always said this Fall was the target.

It's not a huge deal. Some new signs (the no standings) and some new paint on the roads. There was no talk of new left turn lights or new stop lights. Hopefully when the new pattern starts, there'll be some traffic cops to enforce, or rather gently guide, the proceedings. We can make a plea for that.

In my view, this is the best thing to happen to Flatbush since beef patties.

I wanted to go to the meeting at Erasmus High but couldn't... can anyone report on the goings-on?

While I'm all in favor of anything that introduces even of drop of order to the Flatbush traffic anarchy, I'm most concerned how this will affect the dollar vans. As it is now, most ignore virtually every limit, lane and light and now they'll have even less room to maneuver? They'll just pick up and drop off in the single travel lane? Was anything on this topic discussed at the meeting?

Woah, totally unfair accusation against the driving school on SE corner of Flatbush and Parkside. I've been taking driving lessons for a few months with Felix, who runs the driving school based there, and he *always* emphasizes defensive driving. So anyone who took lessons from Felix and is doing crazy stuff is explicitly ignoring what he taught them.