The Boss Is Hiring


The other location gets some pretty serious rave reviews for its Mexican-Panamanian fusion. Read about owner Onishka Camarena here. Look you can get your computer fixed with my man Abdo next door than saddle over to El Jeffe for some killer nachos.

Speaking of which...were you aware that nachos were invented in 1943? By someone named Ignacio "Nacho" Anaya?

The takeover is complete.

Despite the fact that private citizen Alicia Boyd is neither elected nor appointed to any public office or position, she will now be negotiating with the Department of City Planning, developers and (potentially, if she shows up) Councilperson Laurie Cumbo, on the fate of the neighborhood just east of the beloved Brooklyn Botanic Gardens.

To the Q, this is such a stunning and undemocratic turn of events that I fail to understand how any sitting judge would see fit to offer Boyd and her cronies such enormous bargaining power ON OUR BEHALF and without scrutiny. (Story in Brooklyn Eagle)

Check this insanity out. For a crew who spends most of their time decrying a lack of transparency in civic matters, this "private session" crap takes the crumbcake:


Boyd agreed to participate in the settlement talks, which will take place in a private session in the judge’s chambers, and will include lawyers for the entities they are suing. Boyd, Ellis and Hollingsworth are suing City Councilmember Laurie Cumbo, the Department of City Planning and its Director Marisa Lago, plus Winston Von Engel, who is the department’s Brooklyn director. The City Planning Commission and the city Buildings Department are also targeted in the suit.


Think about it...the Community Board by law has a role to play in the ULURP (zoning changes) process. Those 50 members of the community represent many walks of life and mindsets. Their job is to deliberate and make recommendations. The elected Borough President weighs in. The duly elected Councilperson decides, follows by a full-Council vote, again consisting of elected officials. Also in the mix are the landowners and developers and the Department of City Planning, beholden to the (elected) Mayor and his housing and job and economic growth initiatives.

And then, there's un-elected, un-expert and un-civil Ms. Alicia Boyd (with Janine Nichols and Nichola Cox and LaShaun Ellis among others). The scorched-earth Boyd continues to pummel all things deliberative and decent, sitting in a room with the powers that be, deciding your fate through supposed "good faith" negotiations. She's entitle to sue, though god knows it's gotten her (and us) nothing. But negotiating on our behalf?

Don't get me wrong. The Q argued for height limits long before Boyd became Queen of Empire Boulevard. Had we negotiated the zoning changes years ago we would not be here today, vainly attacking one building projects at a time. She'll tell you she's a hero, but it's crucial to remember she got us into this mess to begin with.

Here's your heroes, and the actual renderings, rather than the hyperbole put forward by Boyd and co. And remember, this isn't even the REALLY big buildings being proposed, the ones that even the garden is pissed about. Though, after Boyd's mistreatment, the BBG wants nothing to do with what otherwise would be a natural ally. I'm betting the Garden will come out okay, albeit with more buildings in the horizon. Democracy and civility however, will continue to take hits on the regular. 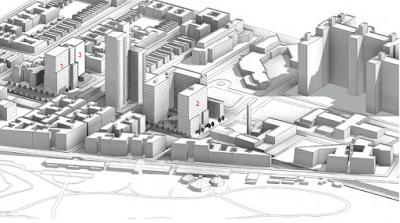 Posted by Clarkson FlatBed at 11:07 AM 7 comments:

Q's Life Hack #1: Nachos in the Bath. Plus, too little childcare

We've noticed the girls' favorite Youtube indie-stars like the phrase "life hack," and we've decided the Q needs to take a stab. In this case, things that we adults can do that bring an element of excitement, style or freedom to the otherwise dreary reality of middle-age. A recurring segment begins.

Q's Life Hack #1: Do you like homemade nachos? Do you enjoy a leisurely hot bath? Why not combine them? After the kids were in bed, and as the Mrs. was reading, I made a plate of delicious nachos, brought it up to the bathroom and enjoyed two of life's simple pleasures, simultaneously.

Oh, and it appears Lefferts and Crown Heights are "daycare" deserts, according to this report from Scott Stringer, who I just emailed to suggest Life Hack #1. The guy always seemed a bit overworked and could use a little "me" time.
prospect-lefferts-gardens-childcare-desert-study-finds
Posted by Clarkson FlatBed at 8:14 AM No comments:

Did Queer-Eye get a-hold of our local subway entrance? Cuz dang it's lookin' good! (it's not much more than a paint job and new light bulbs, but we'll take it!) For 15 years I've fantasized about heading out there at 3am with a buck of paint. You know how it is...every day you see the same dilapidated crapola and you start to feel like crapola. A lesson there perhaps for the power of upkeep and appearances when dealing with city strife. 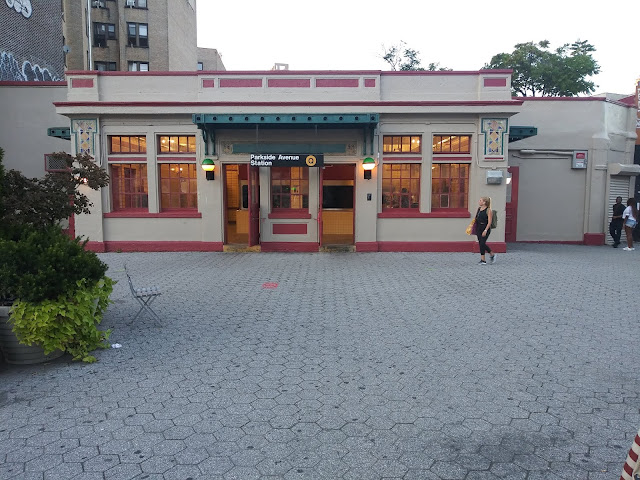 You've all seen it. You've wondered WTF is that tumor on the head of 715 Flatbush? Two more-incongruous surfaces one cannot imagine. And yet, here we are. What was once Nelson's barbershop and a combination driving school/money order/real estate//fax/email and legal beagle has become 242 Flatbush (the upscale market rate apartment building) and 715 Flatbush the soon-to-be something that nearly everyone has opined will be either a Starbucks or Hungry Ghost or Ramen Place or Red Lobster, depending on your outlook and/or hubris at rumor-mongering.
Like many other buildings nearby, including the gorge mansions along Parkside Avenue, 715 Flatbush was designed by the prolific architect Louis Gold. More on his story by Susan De Vries from B-stoner. Given the current zoning, this sort of thing may become much more common along Flatbush Avenue, where some beautiful old buildings could get taller without necessarily coming down altogether. I expect a canyon of 5-7 story new construction, particularly in all the tax-payer and boarded up buildings south of Empire, of which there are still many.

I think it's worth noting that the asking price for the commercial space is not really affordable by many mom-and-pops. The $70/sq/ft/yr means you'll need nearly $100,000 a year to sign a lease. High-end retail, chain stores, maybe restaurants and bars etc. tend to fall into this category. With the location being a commuter goldmine, it's hard to see how this sort of stall could become anything-like the funky hodge-podge currently renting along the Flabenue.

And the apartments? Well, about what you'd expect. At a price considerably higher than my mortgage you could get a rare 3-bedroom that actually looks kinda nice. It'll set you back $3,300 a month, but it does have newness and size, 2 bathrooms and 7 rooms. I can't really tell whether this is a "deal" or not, because there's not a lot that's comparable. If you're in the hunt you could always start here. It's hard to imagine it doesn't shoot up past $4K a month soon, but what the hell do I know. I couldn't afford it even if I wanted it.

l will say that any place with a staircase gets a bump up in my view, even if it goes nowhere. The place is actually quite cheap if this is a Stairway to Heaven, though I suspect it's more of a Stairway to Futon. 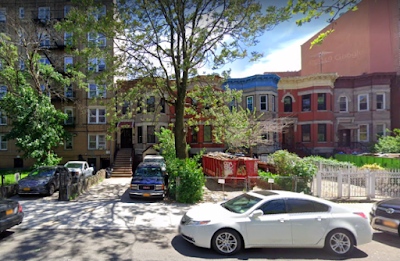