When Whites Crash #BlackLivesMatter. And Accelerationism

Is the current moment of political unrest a chance for solidarity between white and black? Or are all the same dynamics of race, gender and class that plague societal progress simply playing out again on the political left?

More to the point: does that question implicitly ignore the third possibility of outside forces working to keep the two apart? Is our thinking too (ahem) black and white?
These have been the questions on my mind as I looked out at the recent massive protests breaking out across the U.S. and particularly in gentrified Brooklyn. At  first glance I felt proud and heartened by the huge number of Caucasians, young to middle-age mostly, lots of beards and tattoos and funky backpacks. I know these (sorts of) people well, and while I complain from time to time, their hearts are typically solid and their voting impeccable. But in many ways this bunch includes just the sorts of people that many black writers and activists have been kvetching about. Sure, the line went, half a million show up for a feminist rally in Washington D.C. the day Trump gets elected. But where's the outrage when black and brown folks are cruelly targeted by racist cops? And why so many white male leaders rather than working with black leaders who are ALREADY on the ground? But hey, across the country, whites are starting to show up in numbers. That's good! But some are committing vandalism, even instigating violence. And black friends and activists wonder - is this helping or hurting?
You don't need a magnifying glass to judge the demographic makeup of this crowd across from my beloved Q. 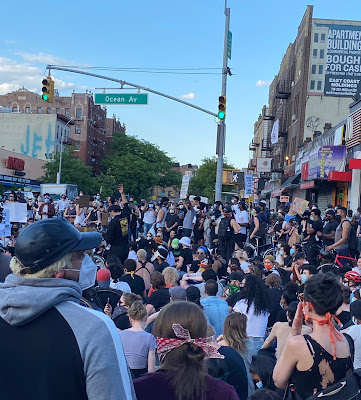 And a walk through this enormous turnout last afternoon continued the trend: 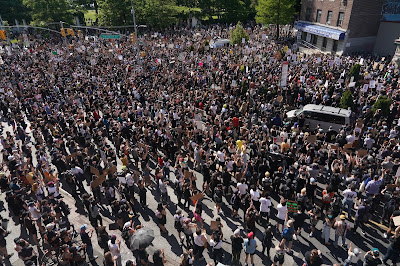 Add to that the insanity of your State Senator Zellnor Myrie being pepper-sprayed and handcuffed by cops for nonviolent protest, while the majority of (mostly white) protesters escape unharmed. (Sorry Zell I don't like making use of your pain to sell a point, but this photo proves what's at stake, and I hope you're okay and more determined than ever to bring the police to account. This is so unnecessary. Let the protests play out. Step in if you see someone destroy something, but not before. And go easy. Most protesters are being arrested peacefully.) 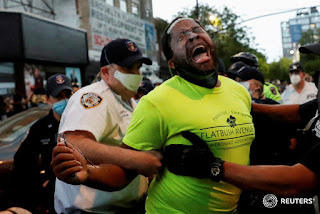 One case in point...a pair of sisters with Antifa backgrounds throw a Molotov cocktail into a cop van. Lucky for them the selfie-bomb was a dud, or they'd be facing murder rather than attempted murder charges. The Samantha Sader story is but one example of a white person being really unhelpful to the cause. This single incident will be used often by the media to show that protests of police abuses are not to be condoned. Other white protesters started fires, threw bricks, broke windows - all pretty standard for trying to instigate a larger conflict. But are these efforts condoned by black protest leaders? Is anyone even ASKING?

In Minneapolis, epicenter of the George Floyd murder and protests, we now have multiple credible accounts of thousands of protesters from outside the Twin Cities, often alone or in suspiciously small groups, causing chaos, fires and looting. According to sounds on the ground from folks in the Little Apple, these often body-and-face-covered actors are by and large white, and at least some seem suspiciously white supremacist, and not interested in joining the larger crowds in slogans and marches.

Who are the "instigators" then?
Maybe it's anti-fascists, or Antifa, who I gotta say are generally cool by me. The brave resistance fighters have no leaders. They confront, they call-out, they don't generally show up with weapons or act violently, though sometimes the property destruction and graffiti is ill-advised. There's no one to hold accountable; individual Antifa do what they please, so in a sense, they're no different than any protester acting out of conscience. They tend to be more emboldened, and god bless. And please, don't criticize unless YOU are on the front lines too. It's easy to quarterback from a distance. Get your hands dirty, and we can talk!

So, like any group of zealots they have adherants who take it all a little too far. There is no Antifa "plan" that promotes violence at protests, and George Soros is not their secret puppet master (the scary anti-semitic trope that has an scary number of believers). But they're brave, and they'll get up in faces. My favorite things Antifa does is to counter-protest white supremacists, and to dox racists and trolls, forcing their hate into the limelight, often getting them fired or ostracized. A nice trick, that. But does Antifa help or hurt the Black Lives Matter movement? Depends on who you ask, but increasingly, they're a thorn in the side of police-brutality protests.

And what about the Accelarationists?
What a great word for a truly fiery global trend. Remember Dylann Roof? Recall just last year's 51 Muslim dead in New Zealand at the hands of a white supremacist? That's "Accelerationism," or the sick practice of forcing ever-greater conflict to instigate a global race war. It's hate, yes. But it's also political. It's political terrorism, meant to incite even greater violence. To think it was simply because Roof hated African-Americans that he decided one day to kill a bunch of them to rid the world of a few of his enemies, that's just nonsensical. Admit it, it never made sense to you either. Even hatred tends to have its internal logic. No. This is a PLAN, and a movement, and rather than label Antifa as terrorists, the Accelerationists need to be spoken of widely in the media and labeled as such, even if "domestic terrorism" has no legal basis, or they will continue to infiltrate protests without consequence and create the conditions more likely to lead to massive civil unrest. Just as they planned.
Simply put, Antifa want to shut down the police and change the system. Accelarationists want to get the police so mad they crack down even harder. And with their hatred of multiculturism, they TOO want to change the system. The "centrists" that get so much hate from far left and far right? They get blamed as BEING the system. Hard to win, but it's worth remembering that centrists vote, and

More on the Accelarationist movement. Make no mistake, they are in Minneapolis and across the country, doing their best to make things worse. Again, whites. And in this case, there's no question they are undermining the message.

How low can whites go? There seems to be no bottom to depths of depravity.
And as on schedule, we have this story of the sick prick who torched a historical building in Nashville. A white supremacist. An Accelerationist. A deeply disturbing example of just why Antifa exists. This kids fascism is real, and if "the State" won't deal with him forefully and call out his behavior for what it is?

That's why Antifa is essential, if not perfect. The State, and centrists, aren't brave enough to take this on.

The Echo Is Here. Death & Life in the Arboreous P.L.G. 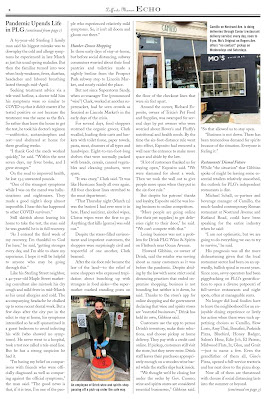 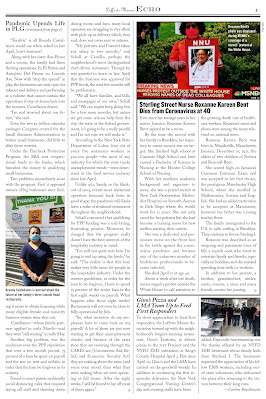 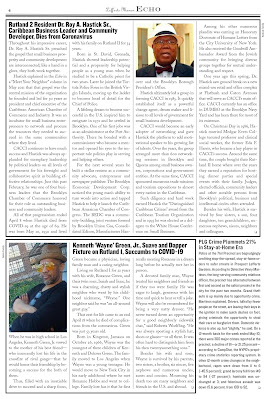 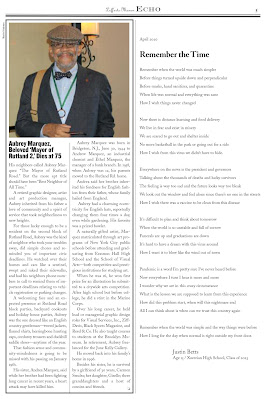 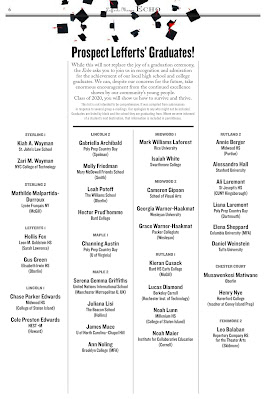 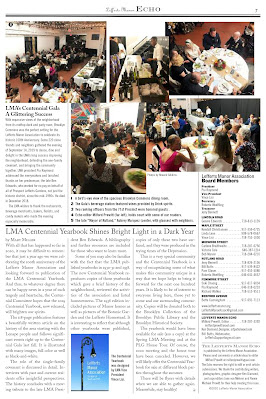 For a better looking copy go here
Posted by Clarkson FlatBed at 3:27 PM No comments:

Eric Adams Is Right: Get Police Out of Social Distancing

When a guy's right, a guy's right. And Eric's nailed it on this issue. Standing within six feet of another person without a mask isn't a crime - it's a bad idea, reckless sure, but maybe unintentional or misinformed. The fact that some cops are rougher, even violent, with people of color on enforcement surprise no one. But is it even an offense they should be policing to begin with?

In the below video, former cop Adams talks about how our City is taking part in a worldwide experiment in "re-culturing." In essence, old behaviors have to be unlearned and FAST. We have to change or we will inadvertently get others sick, killing them or permanently injuring them as COVID ravages their bodies. Crazy, but those are the stakes.

My sister tells me that in north Florida she's in the minority, wearing masks and keeping distance, at the grocery stores and other retailers. People are actively flouting the guidelines to "protest" Bill-Gates-loving-liberals telling them what to do. In NYC, we're generally following good science, and quietly persuading our fellow New Yorkers to do as we do. That's how we slow this thing down - a mass re-education, or re-culturing.
Check out Eric's ideas on how to spread the word without resorting to strong-arm tactics.
Posted by Clarkson FlatBed at 9:38 AM 1 comment:

Sound like the Great Depression? I don't need to tell you this. You don't need to wait for the Federal Reserve to make the statement. We are, for worse and worst, living in a replica of the top of the Great Depression. If you wondered, as I often have, what it must have been like at the START of that fabled era, it would have looked and felt a lot like this, but without the dreadful Zoom meetings. And while history has not been kind to President Herbert Hoover, he was actually a man of conscience and considerable skills. In fact, before the Crash he'd been an American hero, trying to feed the masses, update labor laws and encouraging other upper classies to champion progressive policies and even helped the defeated Germans during their early '20s Great Famine. From Wiki: Hoover had been little known among the American public before 1914, but his service in the Wilson administration established him as a contender in the 1920 presidential election. Hoover's wartime push for higher taxes, criticism of Attorney General A. Mitchell Palmer's actions during the First Red Scare, and his advocacy for measures such as the minimum wage, forty-eight-hour workweek, and elimination of child labor made him appealing to progressives of both parties

The Q can't tell you what the best way to respond to the unfolding tragedy, but here's a couple options.

Killer Assemblyperson Diana Richardson put together this list of local food delivery sites for those seeking distribution of essentials - maybe share widely, or even make a poster or flyer and share? And my previous post suggested a great place to give money or volunteer - Flatbush United Mutual Aid - if you want to help get groceries to people who can't leave their abodes. If you want to join the group get on Slack, yet another app that a person living in 2020 must be on in order to feel whole. Go here to join FUMA's Slack after you donwload the app (I know, I know old person. It's just how it is...remember when Gramma couldn't figure out the remote control on the TV?)
Or if you have extra in the pantry, just drop some appropriate foodstuffs by Diana's office. It's a makeshift food pantry, open to anyone on Friday at noon. 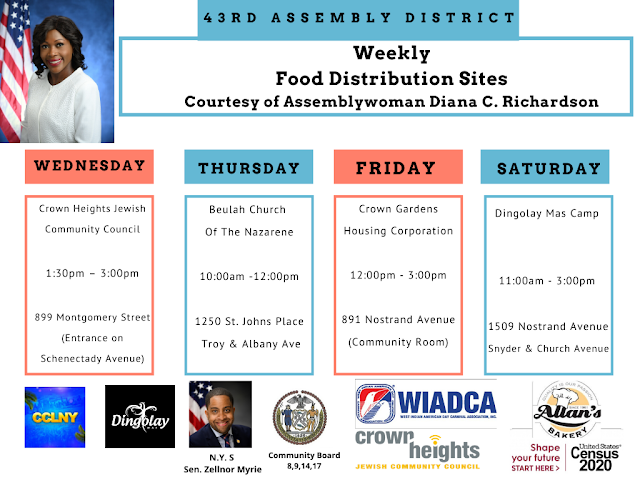 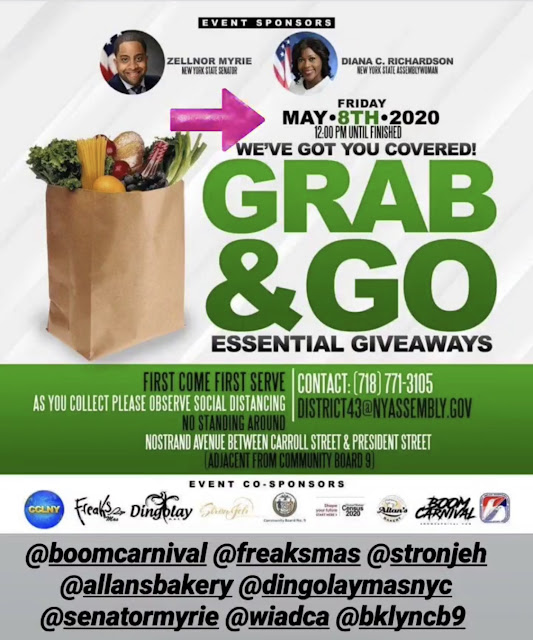 Posted by Clarkson FlatBed at 9:29 AM 2 comments: