Step Up For YOUR Co-Op, Lefferts!

If you're ready to help, just head on over to the Indie-Go-Go page.

Or read on, then give! This story is one of grit and determination, of your neighbors working against all odds to create something communal and healthy. You should definitely become a member! And a donation will allow you that warm feeling inside, that you helped your community keep the kale koming.

You help is vital to our co-op's survival!  But where, you ask, is this $25,000 going?
The store improvements and inventory expansion are essential to the co-op's long-term survival and will put us in a position of stability so we can continue to grow.
Our future looks bright! Since word of the co-op's potential closing has spread, a huge number of members have stepped up. We believe the LCFC is important to the neighborhood and this resurgence of energy and commitment is proof that we have a dedicated core to carry it forward.

Why the Lefferts Food Co-op Matters

We feel that our community lacks adequate access to healthy, affordable food that we have control over. But it's about more than food! We are a group of dedicated people pulling together to nourish and sustain strong community ties through collective ownership and control in a rapidly gentrifying neighborhood.
There is exciting potential: the bonds we build and skills we learn by running a grocery store for ourselves and each other in our neighborhood make us better able to connect with other community groups, speak to our political representatives with one voice, be resilient in the face of peril––anything from natural disasters to predatory landlords and beyond. We're coming together around food but we're ideally learning interdependence, too.

The Lefferts Community Food Co-op started eight years ago as a buyer's club out of the house of a founding member. By 2014, the dream of a cooperative grocery store became a reality with our current home at 324 Empire Ave in the Lefferts Gardens Neighborhood. We are currently 120 members strong and eager to keep growing. (Read more about our early days here.)
A designated Cooperative Corporation under NY State law, we are a member-owned and -operated food store open to all. Our mission is to sell sustainable, nutritious food at a good value, to encourage healthy food practices and to foster environmentally responsible activities through democratic cooperation. LCFC finds strength in the diversity of the community around us and commits to a selection of healthy foods and promotion of healthy eating that respects this.
Read more on our website: www.leffertsfoodcoop.org
We are committed to our co-op! This urgent fiscal need has injected a surge of energy into our membership, who voted overwhelmingly to raise funds and keep the coop open. We've been busy learning, reorganizing, and strategizing for the future ... we've restructured committees, held weekly meetings, painted our gate, made improvements inside, revamped our newsletter, and started work on a backyard garden.
The past year we've also been working tirelessly on a loan from the Park Slope Food Coop. If we raise this $25,000, we will be sending a powerful message to their loan committee that we have an active and engaged membership and are in a position to pay the loan back.
By ensuring our financial stability and having the extra funds to grow, we feel confident that this resurgence will continue, and an even stronger co-op will emerge as a vibrant neighborhood hub.

Other Ways You Can Help

PROMOTE our fundraiser to friends and family through social media, emails, and conversation. Indiegogo has some very easy ways to share our campaign directly to FB, Twitter, or direct emails to friends with pre-composed templates. Just click on those icons next to the “BACK IT” pink button on the campaign page.
COMMUNICATE our vision:  supporters are the co-op’s greatest resource! Go out into the world and let people know why you choose to shop at the co-op.
OFFER A PERK: have a service or item you’d like to donate to our campaign? We’d love it! Click on "Ask A Question" at the top of the page and let us know what you can offer.
BECOME A MEMBER! Learn how here: www.leffertsfoodcoop.org/member.php
Posted by Clarkson FlatBed at 5:47 PM 5 comments:

The Q has seen some shifty shenanigans in just his decade of paying close attention to Central Brooklyn politics. In races where a few hundred votes in a primary can win you a job for life, well, they do say politics is dirty. But then there's just plain shitty.

Maybe you got an email yesterday from "WokeBrooklyn" talking smack about the one "real" elected official round here - Diana Richardson. Now anyone who knows Diana knows she's wide awake, and anyway knocking a strong black elected for not caring about black history in the schools? After being an early co-sponsor before realizing it was largely for show? Because she dared smell a rat and call it a rat? What a weird attack, sent to thousands.

Okay. That's politics, not the shitty part. The crazy part is that the anonymous email came from none other than the "Honorable" Jesse Hamilton. Did he want us to figure that out? Cuz he didn't cover his tracks very well: 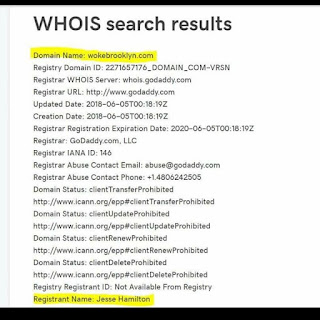 All that poorly cloaked dagger for petty name-calling, with no signature or address other than the laughable WokeBrooklyn.com, faked as well, like it was some actual organization. If Jesse's poorly timed choice to caucus with Republicans the year Trump won the election isn't enough to move you to the Zell column, this should do it. Really, Jesse. Bringing Tupac in to diss Diana? At least have the balls to sign your own name. And all this because Diana dared buck the machine and throw some support behind Zell. Disgraceful.