It's All In the Hands (and face)

It's getting hard to talk to friends about how this COVID-19 gets transmitted. So much fear and hype that I try to stick to the experts and not argue. No one likes a know-it-all, especially in a pandemic I'm finding.

This is perhaps the best video I've seen on the issue of how the coronavirus moves from human to human. It's not nearly as easy to transmit as you might think BUT (and this is a big but) we will have to drastically change the way we touch our own faces. That's why the mask is a useful part of the equation - not surgical grade masks mind you - but any mask. Even the Scream mask would work. Because what you're doing is training yourself not to touch your own face. For some, easier than others, amiright?

Of course everyone needs to be careful in the way that makes them most comfortable. But the idea that you're getting this thing from every surface you touch is not so helpful - touch whatever you like - just don't touch your face until you wash or disinfect.

Additionally, if you DO make a mistake, don't freak. The primary way this thing moves is through SUSTAINED close distant contact and mucous to mucous contact. You know kissing, potentially hugging, getting coughed on. The idea that it just jumps from one person to another like a bug is a poor analogy, and makes people more afraid than is necessary. (A fair amount of fear is obviously justified - but not to the point of complete mental breakdown).

So here it is. I encourage sharing Dr. David Price's common sense video as widely as possible.


Posted by Clarkson FlatBed at 11:11 AM No comments:

You Know It's Serious When the Bagel Place Closes

Took a walk up the Flabenue this morning. Typically it would be full of action even early, folks getting ready for a relaxing start to their weekend, early brunch, Adventists going to church, businesses readying for a weekend of heavy traffic. Nothing. Lefferts has ground to a near-halt. Sure folks are walking about, but mostly they're "essential" workers. Earlier this week the Q took a train to JFK to rent a car. The subway stations were spooky quiet. Cops at every turnstile, on platforms, not yet enforcing what will surely become some sort of "why are you out and about" kind of ban. Because...

This was the week it all became real. Really real.

I thought it might be good to grab a dozen bagels from Flatbush Bagel at the corner of Maple. Typically bustling by this time, it's closed. Closed due to Coronacrisis. What's crazy about that is that we're JUST GETTING STARTED. A NYC neighborhood without bagels is like a cow without flies. It's like a flap without mud. Skin without pores. A capital without a capitol. (Oh who am I kidding. Lefferts didn't have proper bagels til a couple years ago. still...one would think bagels were more than just essential.)

The grocery stores are the only reliably open shops right now. Half the restaurants have closed, most having laid off staffs. There's still food on the shelves, but very specific items have been horded. Toilet paper is the most silly but apparent. Usually there are thousands of rolls to be had at literally dozens of stores. But somehow, New Yorkers with their tiny living spaces, have bought up every truckload that comes in. And this, despite NO indications that there will be shortages of paper products of any kind. It's not a hurricane, and most paper is produced domestically. To put it plainly, people are hording toilet paper because OTHER people are hording toilet paper.

Guess it tells you something about our priorities. When the shit hits the fan, we want to be sure to have something with which to wipe our asses. I mean, after all, isn't this truly what separates us from the beasts?

The food runs make more sense, pasta and peanut butter etc., but I was really surprised by the empty sugar shelves. Guess a lot of people turn to baking, both to save money and for comfort. Still, in the US of A, it's strange to see ANY shelves empty. Anywhere. Even the Ideal and Associated supermarkets are asking customers to maintain distancing, a near impossibility in City groceries, but remarkably it's happening. Though occasionally someone grabs the space between and butts in line. Which normally would cause fisticuffs, but right now, people seem to be forgiving. And given that life has slowed considerably for many, maybe it's just that folks would rather stay out of their homes a few more minutes anyway. Something productive to do, an escape from the four walls.

Bodegas, generally, seem to consider themselves exempt from the entire affair. No masks, no gloves. The local delis around me are mostly manned by Yemenis who seem to have decided that precautions be damned. It's a bit scary really - one can see mosques and Arab run delis being a potential Corona spreader. Though lately I've heard more rumor-mongering about Chasidic Jews holding weddings and ignoring social distancing - though frankly I can find no evidence that ultra-religious Jews are taking the crisis less seriously than anyone else. People do love to blame Jews though, don't they? The New Rochelle outbreak two weeks ago was linked to the Jewish community, but that was TWO WHOLE WEEKS AGO, which seems like a lifetime. Back then the pandemic seemed almost theoretical.

The news outside NYC is filled with horror stories about NYC. In NYC, we hear horror stories about states and elected officials OUTSIDE NYC not taking the crisis seriously. In just a week, governor Andrew Cuomo went from annoying alpha male to beloved compassionate leader, so they say, though I will note that his daily updates on the conditions are pretty damn impressive. The guy lays it all out there - the problems, the work being done, the goals, the reasons behind various rules and suggestions. It's like he was born for the job of crisis manager. Between him and his brother, Chris Cuomo of CNN, Mario's boys have become a one-two punch of diligence and chops. The fact that they keep invoking their mom Matilda is endearing and puts a human face on the "old people" most at risk during the crisis. I attach the belowe Cuomo update mostly for posterity. It gives an excellent snapshot of the situation as of March 27 in the year of the Lord 2020. 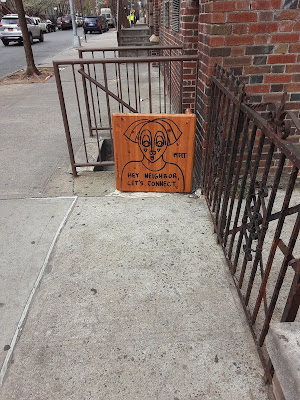 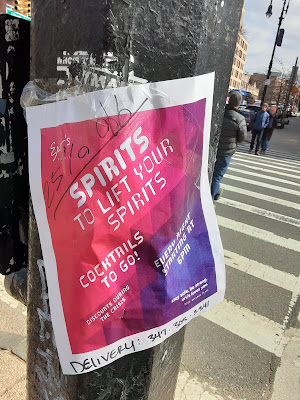 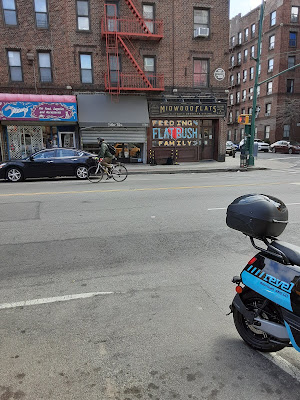 Posted by Clarkson FlatBed at 11:29 AM No comments:

It Will Take Someone Famous Dying...

The Q hasn't felt much like blogging lately. Blogging is SO 2010's. But with my nearly decade of shit-shooting about the neighborhood, the Q at P has become something of a history of this time in the life of Flatbush Lefferts. So to future generations, looking for anecdotal evidence of this Coronacrisis, I type this missive. Because much like the 9/11, and the Great Recession, this is a moment that will be referenced for centuries to come in history textbooks. Will it be but a blip, like the Spanish Flu pandemic of 1918? I think not. Partially because there's SO much media accompanying the craziness, but also because it comes during the single most divisive and destructive presidency of the modern era. And 50 years after Nixon, that's really saying something.

Been thinking lately that in a few days someone famous will die, despite the sort of expert treatment that only the rich can receive. "How did this happen?" they'll say. "It's a wake-up call" they'll say. "But Lou Dobbs was such a dick!" they'll say. "And I thought Ted Nugent was so healthy!" they'll say. Let's just hope it's not a beloved podcaster. That would be SO 2020.

And then the seriousness will sink in even to the willfully ignorant. You think you've seen panic? Real panic begins when Salman Rushdie or Kevin Costner goes. Imagine, surviving a Fatwa, or Waterworld, only to be felled by a microscopic bug. 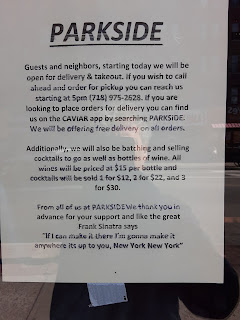 So I give you a taste of Flatbush on March 21. Spring has clearly sprung. Forsythia blooms. The hint of cherry blossoms. Yesterday it topped 70 degrees. I considered wearing shorts, then remembered that I once complained that only white guys wear shorts before and after it's actually appropriate. Today, I saw three (3) white guys wearing shorts. They looked ridiculous. Good call, Q...

To the right you'll see that PARKSIDE pizza notes that delivery is your only option. To future gens: this was the week that the governor officially called for all restaurants and bars to stop serving in-house. A drive around last night showed that cops were enforcing the ban.

Most hair salons are still hopping. Curious what will happen when the ban goes into effect tomorrow night since the nabe has 20 within a six block walk of m'home. These places have always been the lifeblood of the neighborhood, and crucial to the life of communities of color. What will happen come Monday?


Posted by Clarkson FlatBed at 7:12 PM No comments:

Surely You Know the Work of Mr. Two Goobs...

My favorite artist these days is the artist whose work I see the most - Mr. Two Goobs, the man behind those brightly colored abandoned bicycles all over the neighborhood.

If you didn't know the sublime work of Mr. Two Goobs before, the most delicously clownishly named artist since Banksy, then you're in for a treat. Most of these bikes will eventually disappear, when Sanitation gets round to cutting off the locks. In the meantime, enjoy the simple pleasures of a mangled mess of metal. His work will remain up for an indefinite period of time.

A toast, to the power of two. Two Goobs. Some of my personal faves: 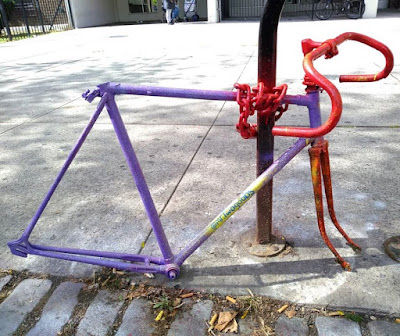 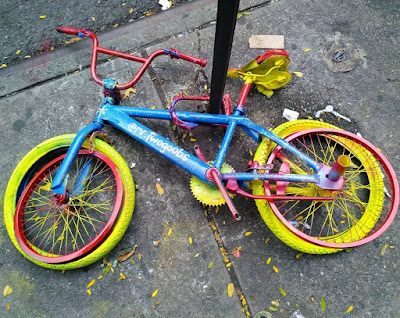 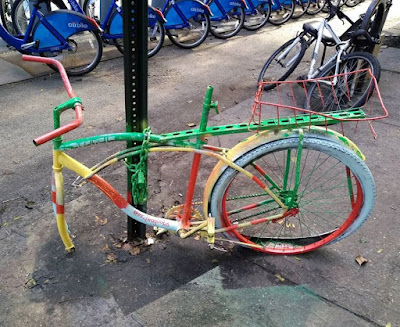 Posted by Clarkson FlatBed at 4:31 PM No comments: