This is all the Q needed to read to begin an early-morning saliva fest all over my PC keyboard:

“We’re going to have the food that you easily find in Mexico on the streets or when you go to the market,” said Castellanos. “It’s real food — like Grandma’s recipes.”

Menu items at the new business include tamales, tortas, guaraches, and atoles, a warm Mexican beverage made from corn dough. The team hopes to open their doors this weekend at 50 Lincoln Rd., the former site of Nagle’s Bagels.

Across from their other excellent joints Ix and El Patron. Yum.
Posted by Clarkson FlatBed at 10:31 AM 1 comment:

After All the Bluster, Bedford Union Armory Takes Shape

As many of we onlookers predicted, the Bedford Armory Project has become a reality after the tweaks necessary for all elected officials to feel satisfied they'd fought the good fight. The Q doesn't mean this cynically (well, maybe a bit.) The process played out like these things do in NYC. A bold plan is announced (nearly 5 years ago). Various factions protest and maneuver for political or activist advantage only to have the finished product look very much like the opening volley.

Then, there's that odd American tradition of the Big Shovel Pic. You know, the silly looking photograph of a bunch of well-dressed professionals smiling with a shovel. These photos take a lot of work to set up, from getting the implements to creating a pile of dirt adequate for the photo op. In this case, due to the nature of the project and its potential for good recreation opportunities in the neighborhood, I give it a thumbs up. In fact, shoveling itself is an excellent exercise, is it not? I mean, have you ever seen an unfit gravedigger? 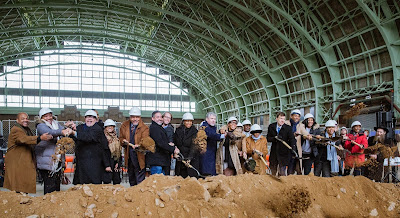 Laurie Cumbo was attacked by our friends at...well, you know...for her part in this. And for all the sturm und drang, here comes this, courtesy of the very developer (BFC Partners) that put together the proposal. 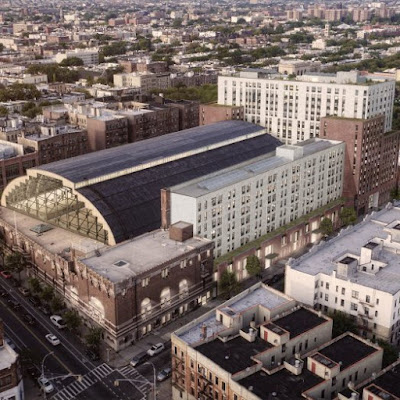 My fave quote from the Kings County Politics article, which was part of the BFC proposal from the git-go, I might add: