Overwhelmed? Of course you are. It's okay to feel that way, but it's not good for the ticker and gray matter to stay that way. The back doesn't like it either.

Some folks are dealing with a deep loneliness at home. And just as the grass is always greener over the septic tank, the Q years for a bit of alone-ness. The girls, at 8 and 11, are doing "distance learning," which basically means homeschooling with an active modem. Work is weird and bizarrely busy, like everyone in the non-profit world is trying to prove how valuable they are, when in fact many of us feel guilty just for having a job at all, fueled by money donated by others.

So, what to do? Here's a tip. Join or donate to the Flatbush United Mutual Aid Society. If you're even the slightest bit tech-curious, you can join them on Slack.com, and while joining yet ANOTHER social media site might make your fingers weary just thinking about it, Slack is basically a glorified texting aggregator that makes it possible for many people to join together to solve problems. You can be on it constantly or 10 minutes a day. You can do work from home (like intake and organizing) or shop and deliver groceries to neighbors who request help. No questions asked. You need something, the community does its best to abide. I've been doing some grocery shop/deliveries and let me tell you, it takes the edge off big time. Talk about one-to-one aid. Give money!

There are literally hundreds of aid groups, but this one is full of your neighbors, and just imagine, when this whole thing is over, you'll have made a bunch of new friends you can maybe finally meet in person.

Anyhoo, head over to the Flatbush United Mutual Aid Facebook page (not the other FMA website) and read about them here on the reliable BKLYNER

TO JOIN THE SLACK GROUP

TO GIVE VIA PAYPAL (Much Needed!)

Posted by Clarkson FlatBed at 6:46 PM No comments:

Wondering if you've got the demon bug? You can actually get tested, if you're in one of these high risk groups.

Given that Essential Workers is a huge category these days that includes everything from the postwoman to the food workers to medical workers to building supers to sanitation and MTA to ConEd to HVAC to hardware stores to veterinarians to journalists to check-cashing places to custodians to good lord just about everyone who actually matters during a crisis which means ultimately that what I've often feared was true IS in fact true, that I'm not essential in any way, and maybe you're feeling the same, that there is nothing inherently needed about what you do for a living and this whole question of whether you're just taking up space on this planet while shuffling towards death has been answered, full stop, and there's really no reason not to crawl up in a ball and hibernate til the whole thing is over, because basically your primary utility is to purchase things to keep the economy moving for the next batch of self-deluded middle-class fools.

CUNY-Medgar Evers College has partnered with One Medical and will be providing COVID-19 testing onsite to essential workers, inclusive of those who work in adult care centers.  Additionally, constituents who are 65 years older with pre-existing medical conditions are also eligible for testing at this site.

Please note that testing will be conducted Monday - Friday from 9am-6pm by appointment only.  For those seeking to be tested, please call 1 (888) 663-6331 or by logging onto onemedical.com to schedule an appointment and for specific campus location details.
Posted by Clarkson FlatBed at 9:08 AM 1 comment:

The New Regular Is Really Not Regular

As a man past 50 I'll tell you a little secret - the Q is lost without his Metamucil. For years I wondered why I couldn't depend upon regular and satisfying bowel movements, but like so many men my age and older I suffered in silence. During a difficult period one vacation I gave psyllium husk a try and I've never let it far from my sight. Solid, greaseless and regular B.M.'s have resulted, and I wouldn't trade that for all the tea in China. I even save money on toilet paper.

You might think that's gross. But is it? Aren't YOU the one who's cheating yourself out of one of life's little luxuries? Psyllium has been used since way before the white man arrived on these shores, and it'll probably still be in use once the white man is eradicated by a new small pox that effects his people but spares the natives, a centuries-long come-uppance for genocide.

Where was I...oh, yes, the Pandemic of 2020. This morning I ran out of Psyllium Husk and so readied myself as for battle with my adorable handmade green polka-dot mask (fashioned by a book club friend of Mrs. Q) and latext gloves, plus a bit of sanitizer in the old coat pocket, and headed around the corner to the Duane Reade, or as the Q's girls still call it the Don Reed, which gives the Q a kick of joy every time he hears the name uttered. 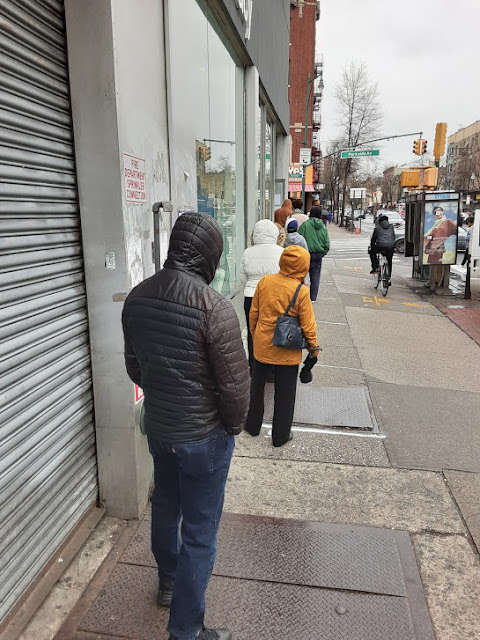 The new normal means that one will stand in line OUTSIDE the joint waiting to enter at a clip that keeps the Don Reed less than its usual density to the tune of about 15 per. There are markings on the floor to keep even the cashier line separated. A man whose meds weren't ready was freaking out - they were his "crazy" meds as he called them. The pharmacist calmed him down and said he'd front him a few while they worked things out with the insurance company. Little heroes seem like Churchills right now.

Tense. Eyes are sunken. A few drunks across the street tossed their bottle into the planter. I was aware of the spit that was inevitably coming from their mouths and I was glad to be on the other sidewalk. For myself I knew they weren't actually free of the reality, just hiding from it for a time, and who am I to begrudge them.

Listening to reports from hospitals is more than the heart can take, but it seems somehow a must to be there with the doctors and hospital workers as much as possible, to at least not be numb to the pain of so many dying alone, their families unable to say good-bye, except perhaps by FaceTime, as the bodies are lifted into refrigerator trucks to handle the overflow from the morgues.

It's dark dude. It's really, really dark, and getting darker.

Posted by Clarkson FlatBed at 5:16 PM No comments: