14 Years Is a Long Time To Have a Shitty Councilperson

OMG it's City elections season already. And a bevy of potential council people to choose from in the 40th. Please, please don't elect current deadbeat Mathieu Eugene's brother, who oddly didn't make this Forum, but will likely earn a ton of votes on name alone. Time to get busy Flatbush. Nine batters on deck tonight... 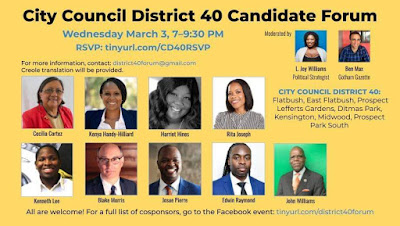 I feel like I've known Bob Marvin for a long time, but I've never been inside his digs, so this is a real treat. Plus the story of old PLG Lefferts that he and Elaine tell. Look, the Q is super busy these days with kids, live-streaming music at the Bang on a Can and trying to keep up with grocery deliveries to vulnerable elders and families. It's not that I don't love blogging - I do. It just fell down the priority list a bit, including writing a bunch of new songs which ain't half bad.

So here's a pic from the Brownstoner article about Bob and Elaine's house, and a link to the story, which a lot of you house-porn lovers will appreciate. I mean, c'mon they went ALL OUT y'all. Is that a friggin' Victrola?

But if NEW is more your thing, my block has been under construction for years thanks to lax zoning laws and the proximity to the park that led so many of us to the neighborhood, which now boasts something like 83 coffee joints.

The amenities read like a "Gentrifier Magazine" joke, but what they hey, and I'll go out on a limb and say the one-bed price is not all that out of the local market price. So what if they did structural damage to the building next door? All in the name of progress, right? Hurrrummmphph.

Posted by Clarkson FlatBed at 10:45 AM No comments: