Need an Awesome gift for that hard-to-gift loved one? Pop on down to Awesome at 617 Flatbush tween Rutland and Fenimore. The Q's been meaning to go for awhile and finally got his fat ass up the 'Bush and was oh so pleasantly surprised to find goofy, hip and "woke" gifts that even made this old man blush a time or too. Owner and new mom Vanessa Raptopoulos lives in the nabe, so this is yet ANOTHER Mom 'n' Pop shop on the ever-expanding list of entrepreneurial upstarts making Flatbush and environs a micronomic engine. (ugh, that sentence! No time for edits.) I'll just leave you with a picture and a plea to go check out AWESOME. 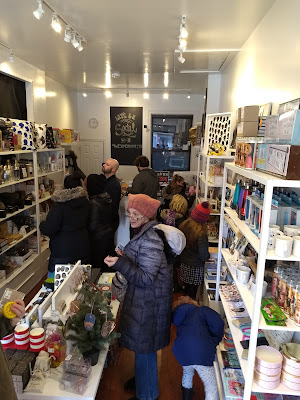 Posted by Clarkson FlatBed at 9:07 AM No comments:

For A Great Christmas Tree, Look No Farther

Further? Farther? Anyhow, the Q is outrageously pleased to share the arrival of a TRUE storefront florist to the neighborhood. On Fenimore, sandwiched between the adorable Record Shop and quirky wild-to-table sit-downer called Honey Badger, Rasheeda and company have opened early specifically to deliver outstanding Christmas trees and wreaths. And soon, you'll find all your floral needs, including (get this) flowers!!!

When Mrs. Q and I moved to the nabe 15 years ago, there were only four things we felt would make our lives complete, commerce-wise. All the other "amenities" seemed unnecessary given the wild variety of offerings here and just a short train ride away. We hoped that one day the following would be opened by local entrepreneurs: a) wine store, b) coffee shop, c) florist and we wanted the d) the NY Times available at the local bodegas. That's it. We weren't looking for yoga, or kale salads, or book stores, or bars or any of the rest. It's a big beautiful city and not everything has to be within a few blocks. With the coming of the ubiquitous smartphone, the Times thing is moot. There are five wine stores and half a dozen coffee shops. And now...a florist!

Two nights ago we purchased the most beautiful, fresh Christmas tree we ever, ever had. It's drinking heavily (this is good in trees, not so much in middle-aged men). It's fat and phat and smells like Christmas, which as a lapsed Christian is about as close to tradition as I can muster. We love it, and we're very much hopeful the new shop will (ahem) flourish! 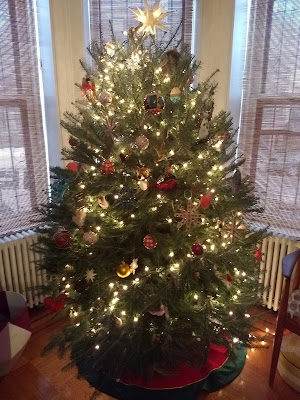 Is He A Peeping Tom When He Looks OUT Instead Of IN?

The Q's beloved Q Station has become the focus of a contemporary quandary. An anonymous poster known only as "Parkside Avenue" (no relation) has been taking photos and videos of random passers-by in front of the Q at Parkside station at Parkside and Ocean (like I had to tell YOU that). The question confronting those who've learned of the semi-invasive Instagram account - is it legal? ethical? hilarious? boring? titillating? any or none of the above? An example of a picture posted - one of a fairly obscured identity (lest you think I'm part of the problem, which, I'm told, I usually always am): 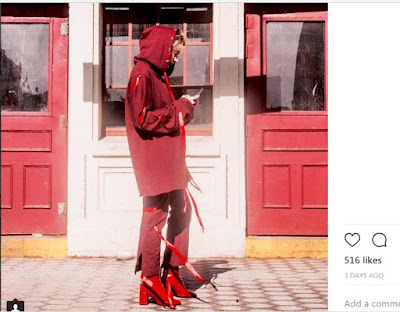 Marc Torrence of Patch wrote a piece about it, and then he managed to bag an interview with the dude, still anonymous. Marc provides some context, in the form of legal perspective on the notion that NONE OF US should assume we have any privacy when out in the public sphere. That is, make sure you put your pants on before you go outside and try not to pick your nose too much. And don't cavort with your paramour or do crimes or even trip and fall in a hilarious manner, because you might be starring in someone's reality TV series.

This reminds me of a situation I had a few years back, that I relayed right here on ye olde blogge. It was about the now defunct Disc Mart African music and ephemera store across from the Kings County Nursery on New York. Here's the post . For the click-averse, basically the store owner told me I couldn't take a picture of his sign without paying him, and I told him where to shove it and he preferred not to and it went south from there. Though truth be told, I chose not to publish the photo, not because he was right, but because despite my reputation I'm really not spoiling for a fight.

Here's the Q's take on the hubbub. Of course you can shoot a photo. You can even share it with the world if you like. When the photos are your art, or in this case your sort-of-art, you should take your ethical role a bit more seriously. That's opinion - that's not law. In other words, yeah you're invading people's privacy and you know it. Typically it's good form to ask before you take someone's picture, regardless of the reason. But if the art is ABOUT being a 24-hour security camera, well, I suppose we'll need to judge the worth of your art vs. the worth of privacy. Not for a court of law, but because we need to do something MUCH more important.

We need to figure out whether you're an asshole.

When a tiny shoppe opens, it's easy to wonder - how can money be made with so little real estate? In the case of Loud Baby (696 Flatbush), the teensy weensy might actually be an advantage. There's little room to camp out, like what the Apple Junkies do - sometimes known as the "creative class" - that hang out at larger coffee joints. This little spot - which has been many things through the years, including most recently a lingerie shoppe - isn't even big enough to be a garage. And yet, somehow, through the most crafty of renovations, the place feels comfy, the sort of place you WANT to frequent. The Q remembers seeing lots of little places like this on his visit to Mexico City last year (pre-earthquake) in the Roma Norte neighborhood. I'm a fan - this place has class and panache in spades.

And how about that loft? It's perfect for a little break for babies and toddlers to play, while mom or dad or nanny sips away on a (and I'm no snob, so take it with a grain of raw organic cane sugar) damn good cup of coffee and a well-curated pastry. THEN there's the strangely perfect addition of a smathering of children's clothes - chosen specifically by co-owner Maritza who happens to be a designer herself. It's the kind of stuff you can't get at Target or even the Q's favorite The Burlington Coat Factory, but with these threads you could be in and out in the time it takes to sip a latte.

So David and Maritza live on Ocean and have four kids (yes, four) and for that alone we should wish them best of luck. For those of you wondering whether you TOO should take the plunge into the wacky world of storefront shoppery, it may be worth noting that this sort of micro-biz is NOT for the faint of heart or weak of wallet. This is hard hard work, but it's been heartening to see so many neighborhood folks take the plunge. Sure we've seen businesses open with fanfare and crash with disappointment - I can name a dozen without cheating by looking at my own old blog posts through the years. And yet, with each coming week, more and more people are taking the plunge. Go for it, I say. And we should support them I say! (Like that cool looking new gift shop called Awesome up the Flabenue - gonna give them a look-see any day and will report back).

Soft opening now, grand opening soon. Give it a shot - of espresso, yo.
Posted by Clarkson FlatBed at 10:14 PM No comments: