Can you blame him?

After months of abuse from not only Alicia Boyd and MTOPP but members of the Board itself (I prefer to call my own complaints "constructive criticism") the first new chairperson of Community Board 9 in decades has formally submitted his resignation. He will also leave the Board effective immediately.

Here's a picture of now former chair Dwayne Nicholson with the man he replaced, Rabbi Jacob Goldstein from happier times. Wait, in all honesty, there really never were any happy times. Not this year anyway. 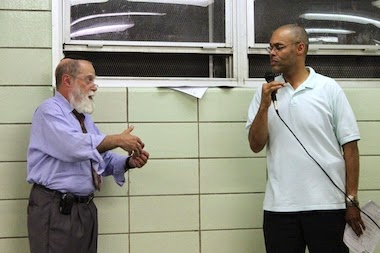 First vice-chair Laura Imperiale, a Lefferts resident, gets the nod for the rest of the term. No surprisingly, on Tuesday Secretary Rosemarie Perry joined Dwayne in leaving the position and board. So. where does that leave us?

It's all fine, can't get worse. Laura's already on it, she's smart, she'll take care of the business of the board. She's got help from a small gaggle of us who've been involved for awhile. Look for a new chair come June; my money's on Demetrius Lawrence, the strong but silent type. At least he probably won't scream at us, and that would be an improvement.

Posted by Clarkson FlatBed at 4:22 PM

Ok Tim, so what's next? No leader at the helm or the ship just gonna sink!

Laura Imperiale will take over in the interim, as she's first vice chair. Demetrius Lawrence will probably run. Beyond that, who knows?

All in all, I believe it's a good thing.

As I recall Laura was in the same click of meeting disruptors as Dwayne and Fred Baptiste last year. I'm not sure how hopeful I should be.