Flatbush Trees Coming This May!

Hey I nearly forgot. With all the insane chaos last week at the CB9 meeting, and with yours truly being "served" with a petition to be removed for attacking "black leaders" in the neighborhood (that's right - Mathieu Eugene and Alicia Boyd are now considered leaders by some. That's some sick joke, right?) there was some great news reported on the Flatbush Trees project and The Parkside Plaza. More on the latter in a bit, but for the Flatbush Trees Cate from Brownstoner ran a nice piece with the following picture. Thanks again for community support! As Eppley pointed out, this has been an awesome experience for the young students at Jackie Robinson who've been involved in making the elements of the soon to bloom trees. 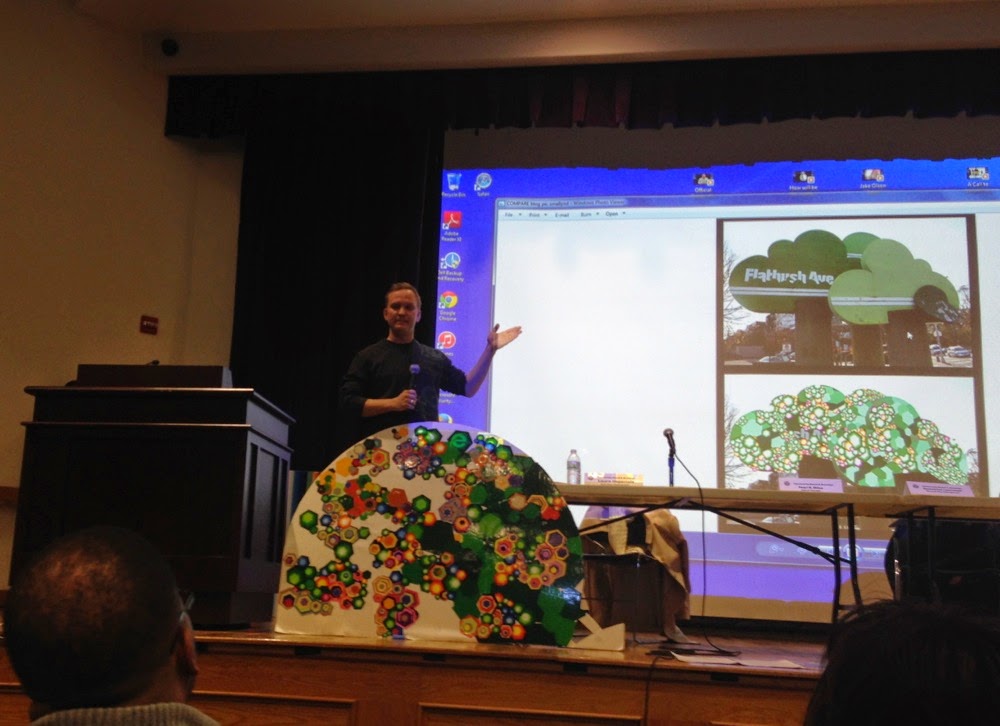 I believe the Q owes apologies to his mostly decent neighbors for getting a little, um, hot under the collar at the meeting when these numbnuts from CHTU called me out for being a racist pro-development blogger. No offense, cuz Crown Heights Tenants Union does great work (I'm about to post about a protest this Thursday), but these young knuckleheads should take a look in the mirror. Being a self-loathing gentrifier does not give you license to call out longer-term residents like myself racist just because I don't think we're being well-represented or led. That's the ultimate insult, in my book, to equal rights. If you claim to lead, black or white, you need to do so with dignity, decency and diligence. Sorry Alicia and Mathieu. You fail miserably, and my saying so is no more racist than wanting slightly taller buildings so for all this insane development in the 'hood we can get a bit of affordable housing. Only someone grasping at cats would think otherwise. Plus they're humorless - they seemed to have missed the joke in every culled statement from the blog. When they said the word "assaholic" into the mic at the meeting as a quote attributed to the Q I had to smile through gritted teeth. Hey it's my coinage; so I'll tell you right now you mispronounced it. It's ass-ah-hawl-ic. Rhymes with alcoholic.

How's that for language unbecoming of a Community Board member? Keep it up and there's lots more to follow. If telling it like it is is a crime, lock me up and throw away the key.
Posted by Clarkson FlatBed at 10:14 AM

Q keep on keepin on. You are telling obvious truths. I'm not sure how you put up with some of this nonsense but thanks for doing it.

On a brighter note it is amazing what can get accomplished when this community works together, just look at the Flatbush Trees project coming along and Parkside Plaza.

Look ever since I was a kid I've hated bullies and frauds. Maybe it's a fear of being those myself...

You damn Sixty-Fivers. Coming here and taking all our jobs.

These people are making utter fools of themselves and don't deserve serious response. You need to disengage.

"Never wrestle with pigs. You both get dirty and the pig likes it." George Bernard Shaw

Save Your Generation said...

Q, why don't you come up with a rezoning policy that keep 80% of Flatbush residents in their units in 5 years, and quit forcing your hand politically?

Lol save your generation, that is nonsense. Brush up on what zoning actually means.

A few people have managed to convince a fair number of people that you can rezone, or not, your way out of displacement. The CHTU is fighting to keep people in their apartments...I trust you are part of their effort? Perhaps you were one of the protesters at ZT Realty today?

In other words, you've got it backwards. Rezoning is pretty much the ONLY way to limit certain kinds of building and encourage others. But that's not your fight, SYG. Your beef is with current housing laws and landlords.

There are plenty of people who study this stuff who think you must build more housing of BOTH kinds in order to continue to support a sustainable City that doesn't skew totally to the rich. You can argue that point if you want, but at this point I would say I'm one of the few people willing to stick my neck out and call bullshit on NIMBY'ites who claim that rezoning will cause MORE displacement, when in fact it can provide more hard working people with a place to live in the neighborhood they call home.

In other words, rezone, don't rezone. Your goal of keeping 80% of people in their apartments relies on fighting illegal harassment and housing discrimination. Protecting housing should be your goal, not fighting zoning. People have been duped by a certain Sterling Street resident who wants you to believe that she's fighting gentrification and white domination. She is a liar and dangerous to neighborhood cohesion. If I thought otherwise, I wouldn't be "forcing my hand politically." I'm telling the truth, and if the truth is "political" then so be it.