Myspace Realty Coming to Flatbush - Hold On To Your Jetpacks

Remember Myspace? Remember Friendster? AskJeeves? City Search? Urban Fetch? Lycos? Actually all of the above still exist. They adjust, they downsize, they become something specific and tiny. The Q was trying to remember his first email address...I know it had to be silly. It was AOL and everybody did that. It was like when we discovered you could be goofy on your answering machine and we all had to try it. This is before cell phones. This is when you might not be able to get hold of your best friend for a COUPLE OF DAYS because they were busy. You dealt. It was a fact of life...not everyone is waiting by their phone. You might have to call one of their other friends and ask if they've seen them. You had a list of numbers written on the wall in pencil. You used pencils.

Want to think something REALLY amazing? Remember when Nirvana's Nevermind came out? And Tribe Called Quest's Low End Theory? Those game-changing records happened in 1991. That year, I was at a party, and this guy named Jason was typing at an old-style Macintosh Computer, which looked like this: 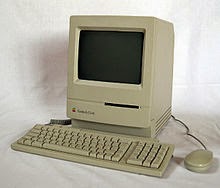 I asked him what he was doing while the rest of us were dancing like maniacs to Nirvana and Tribe. And he said, I kid you not "I'm typing with someone in Japan. In real time.The internet is awesome." So check this list on the Wikipedia of all the websites that were around pre-1995. It'll blow your mind. Crazier still, this link to CERN, one of the only "websites" that would have mattered in 1991, because the W3 (World Wide Web) was still referred to as a "project." Okay, so if you're a computer nerd you're not impressed. But this just wasn't that long ago, and I'm having a hard to remembering what that was like...no internet. I mean I know Gramma didn't have the internet for most of her life. But me? I'm modern. I'm a contemporary of Bjork for god sakes!

So...oh yeah, Myspace Realty. They're pretty much the Gentrification Accelerator. You know things are about to get really white really fast when Myspace arrives. Why? Because their whole biz model depends on it. Okay, okay, it's a "class" thing not a race thing. Except when it isn't. Whic is most of the time.

Here's what the always on-it Mike F. has to say about it over on his Brooklynian thang.

Their business model is to be the realtor of choice for LLCs which have recently purchased small to medium-sized buildings. Vacancies are then created by paying off (and/or pushing out) long-term, often rent stabilized, tenants. Once apartments are vacant, quick renovation jobs are completed, which cater to the preferences of young people (ie stainless steel appliances, IKEA cabinets and closets, and exposed brick). The apartments are then rented to young people who are renting their first place in the city, and often willing to share the units with others. By creating bedrooms, being willing to accept shares and even facilitating matches, the apartments are often filled "room by room" by tenants who need an apartment quickly and don't own a lot of stuff. As a result of working closely with LLCs who flip buildings, MySpace is willing to charge the new tenants "no fee". Whereas many realtors who target more established tenants, charge a fee to fill apartments in buildings they have no relationship with. By being willing to accept lease guarantors (usually the parents), the firm houses young people with no established work history who are often willing to live in neighborhoods that their slightly-more-established-in-NYC peers shun. By targeting young tenants, the firm can be assured regular turnover which results in vacancy bonuses to apartments that are still subject to rent stabilization. A very powerful, efficient, profitable model. ...driven by demand. And, often completely legal. It only works in neighborhoods that are very close to more expensive, more desireable areas. - See more at: http://www.brooklynian.com/discussion/45368/plg-are-you-ready-for-myspace-realty-they-are-coming-#Item_1


Posted by Clarkson FlatBed at 1:38 PM

I left out the part about how easy it often is to spot MySpace buildings from the outside:

They have 3+ bikes chained up to the front fence.

...no need to freak out about zoning. MySpace isn't building anything new.

But more important, MikeF, where were YOU when you first saw or heard about the internet?