Geoffrey Davis is running for Assembly at the special election May 5. He's running against two other Democrats who are also not running on the Democratic line because the Democrats messed up and couldn't get a candidate by deadline. So, Davis is running under his own Love Yourself party. And he's holding a march against gun violence starting at Parkside and Bedford, tomorrow. 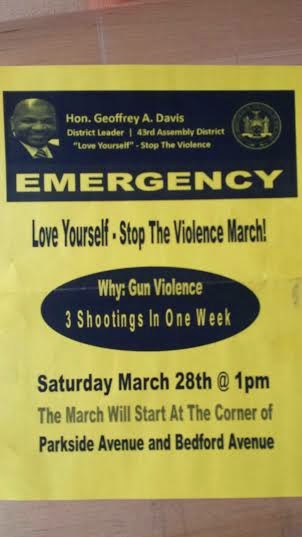 I'll write more about the campaign in the coming weeks, and yeah it would be easy to call the above cynical...but...you know. See you there.

It's a fascinating bunch of candidates. Diana Richards on the Green and Working Families line. The BP and State Senator want septuagenarian Shirley Patterson on the Independent line. And there's an Orthodox candidate, Menachem Raitport, on the Republican line, who's sure to be competitive, meaning it's altogether possible that we might get a Republican Assemblyman, at least for one term.

So weird, it's not. Democracy ain't pretty.
Posted by Clarkson FlatBed at 6:58 PM