If the above pun is painful, I do not apologize.

The patron. El Patron. More like "the Boss" in Spanish. Not like The Boss in Jersey. More like the Colombian Drug Lord El Patron, a guy named Pablo Escobar, who supposedly put together a $30 Billion cocaine empire. Think about that. $30 billion in drug money. At one point he was earning $30 MILLION a DAY. He explained the business thusly: "It's simple—you bribe someone here, you bribe someone there, and you pay a friendly banker to help you bring the money back." Well, that might work in backward Colombia, but it'd NEVER work in a modern democracy like the United States of America. We keep a tight lid on any such shenanigans. That's why we've got such an egalitarian society.

Anywho, I guess Mr. Cocaine is coming to Lincoln Road. Or rather, the latest in a local franchise of Mexican eateries called "El Patron." It would appear they already have outlets in Queens and
Clinton Hill. And now, they get to try their hands at managing the notoriously fickle landlady Rong Ge.

Here's a picture I nicked off the internets of some El Patron food. 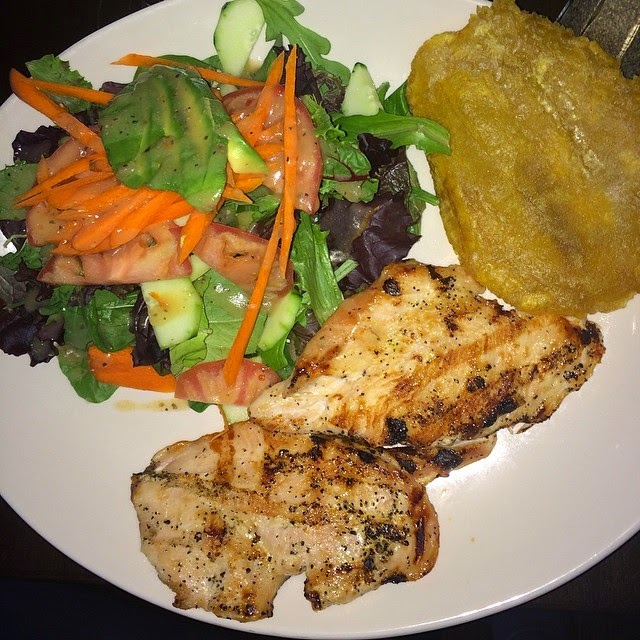 I'm sure it's perfectly delicious, but sometimes I'll look at a plate of food and I don't see the food, I see it chewed up and lodged in the stomach, then the small then large intestines, and I just think what an odd ritual we've attached to the shoving of dead plant and animal energy into our mouth-holes. I mean, the delicacy with which we sometimes adorn the dinner experience is really just ornate window dressing designed to hide the bestial nature of our crammings. What if such artifice accompanied the other end of the process? Then maybe you can see where I'm going with this.

But all that's for another post. Or maybe not. In the meantime, we can look forward to slightly better Latin offerings with the same relaxed family-friendly booze, chow and TV vibe. Here's to a happy ending, better than our Colombian friend enjoyed. And what exactly happened to all that money? I'm sure it was dispersed fairly to the populace, drug treatment centers and compensation for his victims, don't you think?

Posted by Clarkson FlatBed at 1:04 PM

The reviews sound pretty meh, and their photography skills are seriously lacking, but it's got to be better than Enduro's/LPT.

Their other locations look tacky as hell and the reviews of the food are pretty bad. Way to go.

Now, now you two. Don't look a gift taco in the boca.

Yeah, why the continued subpar selections here? A basic Thai or Sushi place would kill there, I would think.

People are more inclined to pay for good food after all...

I wonder if El Patron knows that this spot is where mediocre Mexican food goes to die. It's odd that they'd see the history of the space and not think, "Hmm, maybe not."

Who knows? Google Maps says the other place in Clinton Hill has "Permanently Closed" - so maybe they've learned something from last time around. They seem to get really good and really bad reviews. One never knows why. Make up your own choice.

Barbara never misses an opportunity to bash the place from which she was banned. Let the dead rest in peace already.

Wowie kazowie Batman! News to me, but thanks for the knowledge. And I know my money so isn't worth hanging out with your criminals or bad food or whatever.

And by dead I hope you mean Enduro/LPT, because last I checked I'm still alive :)

And it's very funny to be "banned" from a place because you happen to know the landlord and dislike the food/service, but whatever...

I did not mind the food at LPT. I liked the salad with salmon or grilled chicken. Some of the brunch entrees were good, too.

El Patron just looks like it's going to be gross.

As long as my kids can climb on the booths and order chicken fingers, and I can order a drink, I really don't care what the food tastes like.

Fie on crummy food, LPT/Enduro or this new one.

um...has anyone actually eaten at their other locations? seems premature to judge, unless of course you're legume-intolerant.

LOL I only prejudge restaurants. Truth is, I don't even eat out that much.

The Queens location menu looks better, if this is the same place:

If I can't come to a summary dismissive conclusion based on questionable online reviews from total strangers, well then what is the internet for?

Be careful what you wish for though. I thought I'd prefer a new building over an old rat-infested abandoned eyesore at 33 Lincoln, but instead we've ended up with a never-ending construction site. Now I pine for the old days of decrepitude every time I have to squeeze through that narrow walkway in the street.

Ayayaye anon. Right, because the alternative is nothing at all.

Agreed. To the uninitiated, this hole in the wall on Flatbush south of Clarkson is the bomb for REAL Mexican tacos. Used to be a Chinese Mexican place but don't be fooled.

Not for the fancy, and not for the snobbish. But when you get a radish with your taco, you know you're in the right place.

Let all El Patron rumors be put to rest! I stopped in at El Patron last night. Anna (whom many will remember as an adorable waitress at Enduro), her sister Brenda, and her husband Dom are at the controls, and their love is palpable! Anna's and Dom's daughter is reputed to be coming around to help out too (I think she's about one year old) but was asleep for the night when I stopped in. A strictly family-run enterprise and no relation to any other similarly-named establishment, and the food is the real deal (street food-wise - tacos, burritos, etc.).

And no liquor license for the moment (the LPT license expired in February). I've asked Brenda (who is the admin person) to keep me informed as to when they're to go before the CB so we can all come out to support them.

I'm late to the party, so are we still bashing the place or has actually going kinda quelled that for now?

No bashing from me. It's all tasty and there's nothing hip about it, or trendy. They play actual Mexican music. It's nice. They smartly hung on to everything from LPT and probably didn't have a ton of dough to renovate anyway. No complaints here. Even some of the personnel were retained! It's refreshingly not trying too hard. Only complaint is that the tables are wobbly. Shim shimmery, shim shimmery, shim shim with glue.

My wife and I ate at El Patron a few days ago and thought it was very good; they had enchiladas suizas, my favorite, which Enduro/LPT never had.

Finally tried this place and it's taken the prize of worst Mexican food in New York City. Absolutely terrible, terrible food. I have a sneaky suspicion they're just microwaving canned food in the back.

I am no food snob, and will happily slum at lots of places.

But Barbara, Bob, Tim, if you consider this passable Mexican food (or any food for that matter) I have about 5,000 restaurants in NY to take you to that are approximately a billion times better. Ugh - unforgivably bad.

taco stand food. not fancy. the meat tacos kinda sucked, but i liked the other street treats.

Dude I know me some taco stand, and regularly buy tamales from a lady selling them from a plastic bucket.

This place aint no taco freaking taco stand, it's where tacos go to die a sad horrible death.

This is the first time food anywhere in NY was so bad I was offended!

I wonder if the fact that some of the employees are the same means they just slid onto a month-to-month lease. Gotta investigate. Maybe one of y'all readers can do a bit of sleuthing?

And Paul. Let's go there you and I. Write me offline and we'll go for a taco and you can point out every offensive detail. Curious what gets your goat so intensely!

man. i went there this weekend too. i didn't hate it as much as paul did but i was very disappointed. i really, really wanted this place to be good. the staff was incredibly inattentive which led to them bringing me the entirely wrong order. it took them ages to correct it. and when i finally did get my shrimp tacos they were just sorta swimming in chipotle mayo with some sad sprinklings of shredded lettuce. i wouldn't go so far as to say it's the WORSE mexican food i've had, but it's certainly a lower rung by NYC standards. My bf's burrito had warm ingredients with extremely cold pico de gallo. and the free chips were mostly stale.

maybe the ghosts of LPT are haunting this place

I wonder if they've just been overwhelmed by their success and can't keep up. I was just happy to see Ana and the other Enduro's crew again.

I'm puzzled by these bad reviews. I travelled quite a bit in non-touristy parts of Mexico in my younger days and this is pretty much the kind of food I remember fondly.

Ate there last week and sadly, the food and the service were both very disappointing. The ingredients were low-quality and the enchiladas quite bland. The only vegeterian options, strangely, were sauteed corn OR spinach, which just don't work. Service was inattentive and forgetful despite a practically empty restaurant. We will not be back unless something drastic changes. Too bad, because they definitely improved the atmosphere inside.

I found the enchiladas to be pretty good but the service was pretty bad. I think they just don't have their systems worked out. I had the same people wait on me at LPT and they did just fine, so I think they'll get it together.

I want to know what's happening with the space next door. Will I finally get my Thai place?