The Parkside Project: Come Be Part of the Movement - This Monday Night

Parkside Avenue between Flatbush and Bedford hit a new low last fall. Moses Fried got the upper hand at 205 Parkside after years of complaints. Scaffolding was erected signaling an era of interminable waiting as he and his grandson drag his shoddy renovation out ad nauseum. The Q station looks dilapidatrocious, the Canners rule the sidewalks, 225 is a haven for flash trash, two brand new trees were lost, and across the street the Internet Coffee House decided to heighten its appeal by covering its windows with more advertising clutter than a used card lot. As oft mentioned here, the traffic problems reached a boiling point at the Park entrance...the list goes on, and so, one of the new breed of neighborhood vigilante - Rudy on Winthrop - wants you to help him do something about it. Here's the 411 (or should I say, 311?) on The Parkside Project, which could use your attendance on Monday:

"We are a group of neighbors who want to make Parkside Avenue into the best street it can be.  This summer and fall, we're organizing a contest, and will be awarding cash prizes for the best plan to redesign Parkside between Prospect Park and Flatbush.  We're hoping to bring the whole community together -- neighbors, merchants, commuters, elected officials -- to get the boldest and best ideas:  a complete renovation of the historic subway station?  a farmer's market in the park?  a community center in the derelict building?  a mural on the back of Duane Reade?

"Come hear about the Parkside Project, and learn how you can get involved, this Monday, May 16, at 7:30pm, at Senator Eric Adams' offices, 572 Flatbush Avenue."

I can vouch for the fact that Rudy puts on a good slide-show-song-n-dance. I got a sneak peak when he and I met with State Assemblyman Hakeem Jeffries just this past Thursday. I took this picture of Rudy and Hakeem palling around after. I'm going to tell you right now that Jeffries is GOING places. 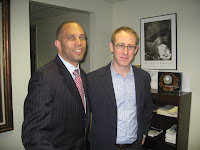 Not that he's not already SOME place - Albany is, after all, a major State Capitol. But not only did Jeffries "get" everything we were talking about, he came up with concrete ideas of how best to deal with each of the many issues confronting the area. The sky's the limit for this guy. His district covers the block in question, but check this crazy map to see how, perhaps, one of the problems with exacting change from this street is its insane locating at the furthest reaches of a dozen elected officials districts.

See you Monday.
Posted by Clarkson FlatBed at 10:21 PM

I recruited the artists for the PLG Arts murals on Lincoln & Flatbush and Fenimore St. and would love a chance to do the same at the Duane Read site if we could get the ownet's permission.