The Q's mind is a muddled mess on race. I started this blog to unclutter and unpack some of my lifelong chatter, but I just seem to grow more befuddled by my ever-changing perspective and lack of understanding, since, you know, I'm not...there I'll go right out and say it. I'm not black. Never have been. Never been a woman neither, but for some reason I haven't trained my eye on feminism the way I have on racism. (Mrs. Q is thanking her lucky stars on that front right about now...if she even reads this stuff anymore.)

In the span of 24 hours, I've been sent many fun items to check out, four of which came in the following order:

A) A treatise by a not-particularly accomplished dude named James Buntin in Slate titled "The Gentrification Myth: It's Extremely Rare and Not As Bad For the Poor As You Think."

B) An SNL skit (see bottom of post) that wouldn't be funny at all if Gentrification in Brooklyn weren't in fact a thang (because comedy is way more real than any cherry-picked statistics, especially statistics as interpreted by a dude who clearly gets off, as do I, by being contrarian, and somehow thinks that Adams Morgan in D.C. somehow qualifies as a case study in current trends.)

C) A hilarious observation that this weekend's Charles Blow scorcher on how wealthy people should consider, contrary to their stated beliefs, that it's extremely expensive to be poor, was placed right next to this here Air BnB picture: 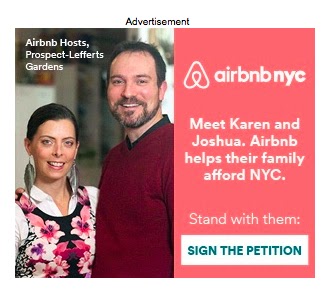 D) A biting piece on how you and I probably don't know "what Martin Luther King actually did," which boils down to the following - MLK urged and taught black folks to face their worst fears born of years of living under a constant state of terror, thereby ending the terrorism in the South. Terrorism - good choice of words. And he urged and taught black folks to collectively take the beatings and fury with dignity, thereby exposing who it was that was truly weak and ultimately the most fearful and ignorant - the white Jim Crow power structure. And so, I surmised after reading the essay by Hamden Rice, MLK is not just the "Dream" guy, but actually a nightmare-ender.

I urge you to read/view them all, and tell me if your head too spins like a dreidal in its neck socket.

Btw, Buntin's article is a sick and sorry piece journalism. First, the studies he cites are nearly 20 years old. Talking about '90s gentrification to describe current social trends would be like talking about the '90s internet to describe current social media. He cites some of the same statistics I've seen elsewhere to say displacement doesn't happen, then notes that gentrification is actually REAL in places like D.C., Chicago and NYC. Like, who actually gives a damn about anywhere else anyway? (Btw, add L.A. to the list James - white folks have finally crossed the old freeway dividing lines. Atlanta's undergoing racial upheaval, and Texas...well, only Texas cares about Texas so I'll let them sort that out.)

What's crazy too is that his editors let him stick with the jaw-dropping headline when halfway through he completely changes the subject:


While critics of gentrification decry a process that is largely imaginary, they’ve missed a far more serious problem—the spread of extreme poverty.

I wonder exactly how many critics of gentrification actually missed the spread of poverty? Oops! Didn't catch that USA Today scoop! It may shock readers of the Q but this "displacement" that Buntin says doesn't happen isn't even the core of the real problem. It's the WAY that it happens. If a landlord in a market rate apartment raises the rent - because he can - and can find a tenant who can pay the higher rate, well, that's how capitalism works and it sucks if you were the one priced out. It's happening all the time in post-gentrified Manhattan. But if a landlord CAN'T legally raise your rent more than a certain amount and employs illegal and intimidating tactics to get you out or to pay more, then you have SYSTEMATIC displacement. And when that process happens by whites to blacks, don't be surprised if it arouses a bit of suspicion and echoes of previous struggles.

If, as Buntin argues, you are black with at least a high school diploma, and you manage to keep your place of residence, you too may see some benefits from gentrification. His advice runs something like this: hold tight mildly educated not-too-impoverished black folks! We're coming to the rescue sooner than you can fire up a Macbook Air! Assimilate while you still can; it's good for you! Roll film...

Posted by Clarkson FlatBed at 11:46 PM